Imagine for a moment a world without crimes.  Sounds like something right out of the movie ‘Minority Report’ right?  This movie starring Tom Cruise looks into the not so distant future 2054 A.D. when crime is virtually eliminated, thanks to an elite law enforcing squad called “Precrime”.  They did this using three gifted humans (called “Pre-Cogs”)  that have special powers who see into the future and predict crimes before they happen. [1]

Even my favorite show Person of Interest plays into this obsession.  For those who haven not seen this show it’s about “The Machine”- a futuristic man made system used to predict violent acts through analyzing various government agency feeds, combined with data collected from various other sources, including video footage, phone calls,GPS, electronic transactions, e-mail, and social media helps its inventor to stop crime before it actually happens.[2] Please take a look.

Yes these are fictional representations, however they are not a far stretch of what is actually happening today.  Are we really living in a police state where big brother is watching our every move?  This blog will highlight some of the technologies used by police forces around the world,, and  like it or not they are accessing your social media posts to  do so. 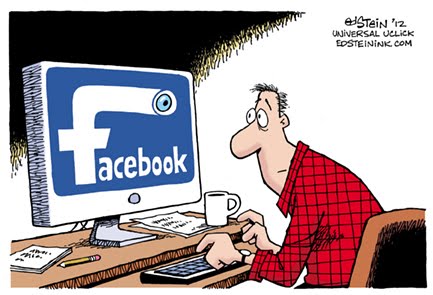 Researching this topic I have learnt that countries around the world are adopting technologies and software to further their pursuit to stop crimes before they happen. These proprietary systems are using public data though various social networks and running it through their algorithms to detect possible threats. Recently, there has been a huge wave of organizations predictive software.  The new approach to policing is that it has shifted from being good at reacting to crime to becoming better at predicting it.

Here are just a few examples of technologies out there that are providing new arsenal for policing around the globe.  Honestly, I am not so convinced that these types of artificial intelligence systems can formulate an opinion about a person based on what they post on Facebook, I guess you can draw your own conclusions.

Beware – is being piloted in several US States.  It analyzes people’s social media activity, property records, and the records of friends and family to assign suspects a so-called “threat-score.”  That “threat-score” is then be used by police to pre-determine if a suspect is going to be dangerous, and to adapt their approach accordingly.  You’re telling me that a software can predict who will be the next shoe bomber… really?

Trending in the world of tomorrow is pre-crime “predictive policing,” which uses vast Big Data stores to compile profiles on all the citizenry, allowing law enforcement and government officials to hone in on targets, with promises of predicting where crimes will happen next, and preparing for encounters with individuals who have been assessed as high risks. [3]

Hot off the press, China recently contracted the China Electronics Technology Group, the country’s largest defense contractor, to develop the predictive software. It will work by compiling advanced surveillance data, including using artificial intelligence to identify people’s faces on security camera footage, and analyzing people’s online behaviour, financial transactions, jobs, and habits….Wow this is just like “The Machine” [4]

The below Digital Life Podcast has an interesting discussion on the future crime and the surveillance state in light of China’s recent efforts to use predictive analytics and big data to stop terrorism.

And finally Motorola has introduced their own solution to keep the men in blue connected and armed with knowledge at all times: Connected Law Enforcement Officer and Crime Predictions work together see clip below

Here is more on Motorola Solutions “Intelligent Data Portal”one of the most wanted devices at this year’s Critical Comms World, Spain

These are just a tip of the iceberg of what is available to Law Enforcement agencies today. “Predictive Policing” is a hot topic these days.  As social media networks expand and evolve so will technologies that will infiltrate them.

Monitoring real-time updates on Facebook, Twitter, and other social media can provide law enforcement officials with immediate information on crimes just committed and other criminal activity being planned. From criminal mischief by juveniles to very serious crimes, including homicide, some criminals frequently post and promote their criminal activity and plans, leaving the ball in law enforcement’s court to identify and stop it, when possible. [5]

UK Home Secretary Theresa May, has called on police forces to use predictive analytics in crime prevention as a way of mining the “vast quantities of data” the public now generates. She said the use of predictive analytics could help forces “identify those most at risk of crime, locations most likely to see crimes committed, patterns of suspicious activity that may merit investigation and to target their resources most effectively against the greatest threats.” [6]

From London to China and all around the globe, policing has come a long way in this digital age of ours. I was curious to find out if Canada has or will adopt any of these predictive technologies.

Nora Yong, from the show the Spark on CBC radio, spoke with a special constable Ryan Prox  with the Vancouver Police Department and adjunct professor at Simon Fraser University about the state of predictive policing in Canada:

He explains why Canada is more conservative in its adoption of this technology versus the US.   He also discusses which type of crimes predictive style policing  would be more beneficial for i.e. property crimes versus those acts against humans.

On July 27, 2011 the Toronto Police Services had a social media launch in hopes to improve public safety, public service and public trust.

With all of these efforts law enforcement around the world has taken note of the Toronto Police Service’s social media successes and now more than ever will be watching the TPS as they continue to break new ground for law enforcement, all in the name of accountability, transparency and customer service. Dozens if not hundreds of agencies across the globe are doing a good job with social media. But the TPS is kicking it up a notch or two by applying a practical yet pioneering strategy and thereby adding real substance to the words “to serve and protect”.  [7]

Wanting to find out what the future plans for TPS are with the use of Social Media in crime prevention I  have reached out to Meaghan Gray Corporate Communications TPS , to share her thoughts on the future of Social Networking and Policing in Toronto and am just waiting to hear back will update shortly…..

As we can see that many countries feel that using social media in conjunction with public data can aid them in predicting different types of crimes before it happens.

But what happens when this type of technology falls into the wrong hands?

On the flip side of crime prevention is crime creation.  The never ending race to stop crime before it happens is heating up as we are faced with the smarter criminals using similar technologies to plan their next attack.

Here is an extremely interesting Ted Talks presentation called A Vision of Crimes in the Future. Marc Goodman talks about the world becoming increasingly open, and its implications being both bright and dangerous. He paints a portrait of a grave future, in which technology’s rapid development could allow crime to take a turn for the worse.

My final thought on this topic, are as a parent.  It is my hope that in future there are more actions taken to protect children against crimes made through social media. I would like to see similar technologies created to take more action to prevent cyber bulling, child abductions, reaching those crying out for help and stopping online predators for good!