In May of 2013 we were introduced to the owners of Amy’s Baking Company on Gordan Ramsay’s hit show, “Kitchen Nightmares” and the world as we knew it, would never be the same…

Most entrepreneurs can only dream of world wide recognition, being featured on the Forbes website in an article dedicated to them or of becoming an internet sensation almost overnight. But as you will learn from the ongoing saga that surrounds Amy’s Baking Company, a small self proclaimed baking- bistro type restaurant based in Scotsdale Arizona, there is certainly such a thing as ‘bad publicity’ and anyone who has ever doubted the impact social media can have on a business’ success or failure will surely have a change of heart upon hearing this tale of social media caution.

Engaging with your customers online and dealing with negative reviews are something of the norm for many business owners in today’s technological and socially driven world. Many a consultant will tell you there is a certain art to developing a sustainable and effective online presence aimed at assisting in the achievement of your business’ overall goals and objectives. A wrong move and you could be spelling disaster for the future of your business, regardless of how long you’ve been in business. Today’s consumer is less likely to put up with anything less than satisfactory and it’s wise for business’ who plan to engage socially to take a good hard look at their business, determine the current status of online opinion through keyword reports and such and make any changes needed to avoid a potentially damaging event.

In a way; you could say that Samy and Amy Boregalo had started on the right foot when scouring the internet to find reviews of their restaurant  However, any good that may have come from the search quickly turned south when reviews appeared on Yelp and other review sites, criticizing food and service at the Scottsdale restaurant. We may never fully understand the reasoning that occurs in both Amy and Samy’s heads before deciding to react to negative reviews, but one can be certain; they weren’t acting on the advice of any PR or social media expert and even if they’ve been given advice since; they most certainly have chosen to ignore it.

One of the original posts, featured on Yelp in November of 2012, criticized both food and service and criticized the owners for refusing to seat a family of four- including two small children, that had not made reservations when the restaurant appeared to have more than enough space to do so. The review adds a follow up comment featuring a copied response from “Samy the owner” apparently written in response to the original review, 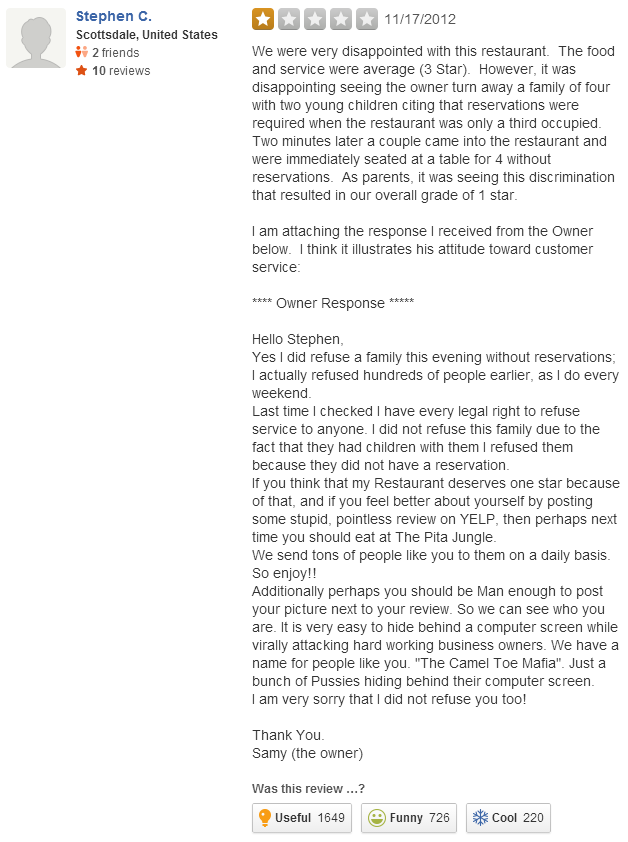 A screenshot of a 2012 review of Amy’s Baking Company