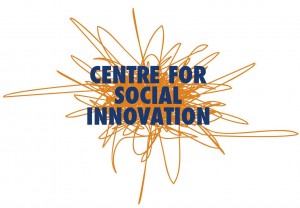 The Centre for Social Innovation is a social enterprise with a mission to catalyze social innovation in Toronto and around the world. Based around the belief that society is facing unprecedented economic, environmental, social and cultural challenges; the CSI holds that new innovations are key to turning these challenges into opportunities to improve communities and the planet. The CSI is a coworking space, community, and launchpad for people who are changing the world, with four locations in Toronto and a location in New York City. It provides members with the tools they need to accelerate their success and amplify their impact. Together, the CSI and its members are building a movement of nonprofits, for-profits, entrepreneurs, artists, and activists working across sectors to create a better world.

Grounded in the organizational CSI Pyramid, first, space is carefully created. The space is designed thoughtfully, with function, energy, invitation and whimsy in mind. Once the space is created, the CSI curates the space through careful selection of members who create a community. Social media figures in this section of the pyramid. People are drawn in because of the need for a workspace and stay because of the sense of community and shared values. Once community has been realized, innovation occurs through serendipity! 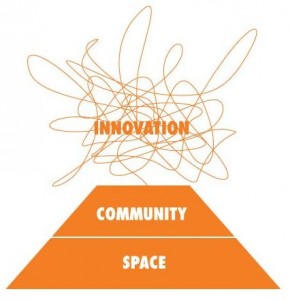 Transposing a Vibrant Community onto Social Media
The CSI is a community of over 2,500, projects and people across a broad spectrum of industries and organizational models. While there are a number of people employed by the CSI, the social enterprise serves as a hub to its members. Not only is space provided but general office and productivity tools such as photocopiers, fax machines, telephones, communal kitchens and more. If one were to apply a traditional organizational model to the CSI, it could be easy to see that the members are a workforce that need to be engaged to ensure they are working towards the Centre’s social mission and shared values. These are social innovation, changing the world for the better, and fun. Prior to the mass adoption of Web 2.0, the Centre for Social Innovation was utilizing grassroots and traditional methods of engaging the workforce (members). There were emails about office events such as the yearly holiday party and messages about meeting for drinks. These emails were sent through a group listserv. A regular office occurrence was, and still is, Salad Club. This gathering acted as an opportunity for the community to gather, break bread, and generate ideas. All of the group activities and emails of the early days forged the bonds of the social network. Once social media came into the mix, it was easy (for the most part) to transpose the vibrancy of the community into the new forums!

Social Media Platforms Used
The CSI employs the use of many social media platforms to engage members: email listservs for each separate location as well as an all members list; Twitter; Facebook; a Youtube channel and the office intranet.

Aside from the email listservs, the intranet acts as the most direct form of engagement with the CSI membership. Members are able to book meeting rooms and check membership fees and pay rent. They are able to find and discover what other organizations are doing. Members may post upcoming events; job opportunities; news updates, and all of these posts are pushed to the CSI website and to the newsletter. Some of these items also make it to print in The Collider. There are many emails circulated through the listserv and sometimes deeply contentious political issues and perspectives arise. This is the nature of changing the world, people get passionate. The CSI encourages folks to take these passionate conversations to the discussions section of the intranet. According to Barnabe Geis, not much discussion takes places there and the CSI is in the midst of determining what the best solution is to encourage those conversations to continue in an online forum.

Since joining Twitter in 2009, @csiTO has tweeted 5,775 times to over 16.9K followers. Many of the tweets fall in the sphere of employee recognition where @csiTO sends kudos and support to member organizations. @csiTO has even created the hashtag #CSImember for the purpose of recognition.

Given that the Centre for Social Innovation crosses international boundaries into the United States of America, there is a different Twitter account for the New York City location. This account was started in 2012 and does not yet have the same reach as @csiTO. However, members are tweeted at directly and engaged in conversation. Both Twitter feeds have substantial photo streams as well as videos. This also serves as a method of engagement. Professional events and social events are documented to boost the good work and remind members of the fun and camaraderie.The Youtube channel works much like the Twitter photo streams. Videos are uploaded to document good work and to increase member engagement through fun and whimsy. A great example of the fun is the 2014 holiday smackdown video.

Each year, the CSI hosts a holiday party for all members and it is an opportunity for the collaboration and cooperation to be set aside for competition: best cookie, best cocktail. Most members turn out for this event and spend the evening dancing and drinking. The video sets the tone for the event and creates anticipation. Following the release of the video, there is a flurry of “smack talking emails” that further set the tone and indicate a highly engaged membership. Starting in 2011, a video was released each year to hype the annual members event.

On Facebook, CSI members are asked to moderate and provide content for the CSI Facebook page on a weekly basis. This approach allows for diverse content generation, a variation in voice and perspective for the over 18,000 fan likes, and increased member input. The decision making is very much in the hands of members when they are responsible for content creation. This is a progressive and bold approach that pays off. Members are able to boost their organizational profiles while boosting the CSI profile. All the while, community is fostered through the use of social media. Important to note is that Facebook changed the algorithm for Pages in 2014. According to Geis, Facebook is gentrifying its Pages feature. This handy article explains the algorithm changes and the issue regarding free promotion versus paid promotion. As a result of the algorithm change, CSI noted that it was not receiving as much traction on Facebook. So in response, Mr. Geis and his trusty communications crew established the “Week in the Life” feature. A member organization is invited to curate and generate content for the Facebook page for one week. This usually falls in line with a major event or milestone for the member organization. In addition, the member organization is gifted $20 from the CSI to run ads on Facebook. The result has been well received by the community and the Facebook page is again reaching more members.
Later this year, the CSI will be unveiling an update to its website. Geis revealed that the CSI has taken a keen look at the Accessibility for Ontarians with Disabilities Act (AODA) and is creating a site that will go beyond the base recommendations for accessibility. This means members with varying abilities will now be more engaged and integrated into the CSI community.
Lessons for Others

Submitted By: Saara Siddiqi, SMBP Student, University of Waterloo
To contact the author of this entry please email: saara.siddiqi@gmail.com