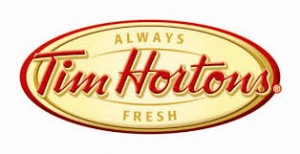 Are emojis the new internet slang? According to Swyft Media, 6 billion emoticons or emoji stickers are sent every day via mobile messaging apps worldwide. As well, Emarketer.com claims almost 49% of US adult internet users have used emojis on social media or in text messages. This pool didn’t even include teenagers. And if you want to find out which emoji is used the most by Canadians, you can find out here. 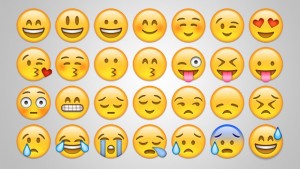 Tim Hortons, one of North America’s largest restaurant chains (which poured its first double-double in Hamilton, Ontario in 1964), has over 4,700 stores including 3,700 of those in Canada. The company’s new CMO Peter Nowlan spoke at a convention of Brand leaders in Banff earlier this year, called The Gathering. This 30-minute video of his keynote speech at the event gives some history of the company and what marketing efforts work for them.

Tim Hortons recently engaged a New York-based digital marketing firm called Snaps to create its own Canadian emoji keyboard. Snaps claims that messaging is the new social media, and on its homepage asks its potential clients: “Are you part of the 40 billion conversations that happen every day in this channel?”

Tim Hortons jumped on board – perhaps to propel the country out of the toilet (see link referenced above) and into the upper echelons of emoji-based discourse! The keyboard is aptly named “EHmoji” – a light-hearted poke at the Canadian expression. It includes 12 emojis: the maple leaf, barbeque, beaver, Muskoka chair, heart-shaped flag, moose, toque, fireworks, inukshuk, a Tim Hortons coffee cup. As well as “Eh” in English, “Tsé” in French. The announcement got 975 Favourites and 570 Re-tweets on the launch day:

The keyboard is available on the App Store.

I asked one of Tim Horton’s Oakville office marketers, Hailey Dedominicis, if they had any video on the announcement of the new keyboard and she said it was all done via media releases, Facebook and Twitter. The release of the keyboard was timed perfectly: just days before our country celebrated its 148th birthday on July 1, 2015. Peter Nowlan said in a media release that the timing was of course on purpose:

“Just in time for a Muskoka-chair-lounging-backyard-barbecuing-firework-watching Canada Day, Tim Hortons is introducing a uniquely Canadian EHmoji keyboard so we can all share our national pride, one text at a time.”

Nowlan says Tim Hortons set out to create a set of emojis that personified our country by capturing some of the things that make us unique and are recognized around the world. Thanks to the restaurant, now you don’t have to be a neanderthal and type out actual words to describe your love of barbeques or moose!

The company then got social media involved in this marketing effort. Tim Hortons told Canadians, through their website, Facebook page and Twitter to use the hashtag #TextLikeaCanadian so they can keep track of re-tweets and shares. They also are continuing to post photos of Canadian icons (such as poutine and the Rockies) and asking followers their opinion on such suggestions for new emojis. Tim Hortons will then consider adding the new suggestions to a future version of the keyboard. Their Facebook page (which has 2.5 million likes) is hopping with likes and suggestions. For example, this posting got 250 favourites and 42 re-tweets: 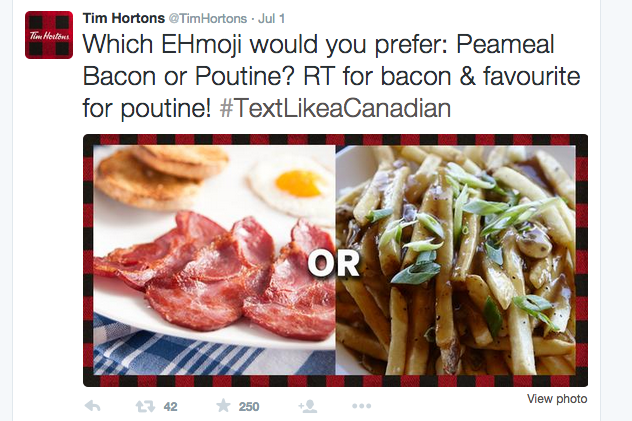 The most popular “Ehmojis” suggestions will be added to the keyboard in the weeks following: 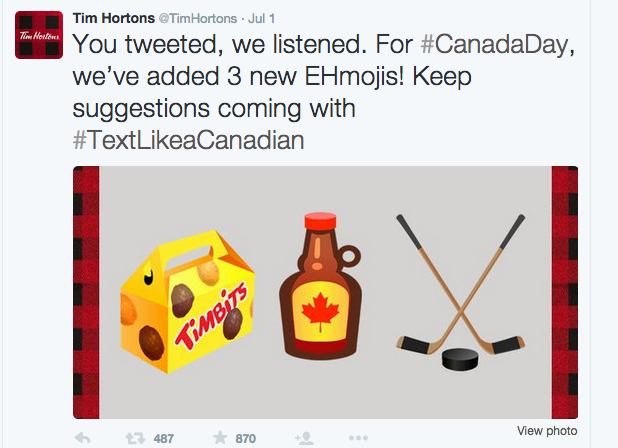 Other followers have re-posted the announcement, such as Canadian Free Stuff. US based Product Hunt (which highlights new products) tweeted the announcement, and in turn engaged others exponentially, and voila, Tim Horton’s social media marketing efforts multiplied across North America without spending an extra cent. 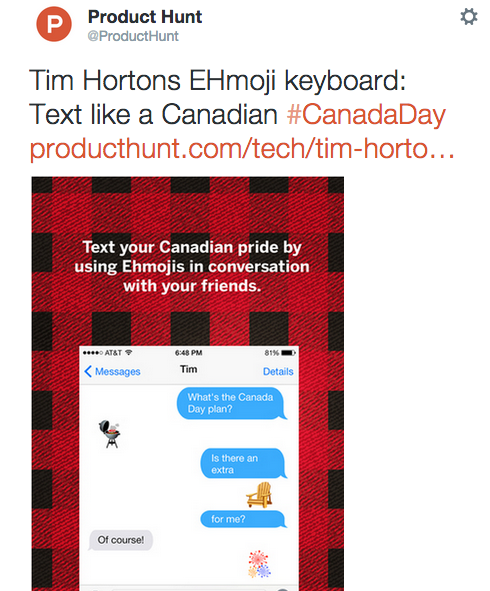 Nowlan says Tim Hortons prides itself on branding and community engagement, with social media being part of that marketing effort:

Lessons:
1. Timing is everything: plan your social media marketing around holidays and special dates.
2. Canadians love to show their pride, even on their mobile devices.
3. Marketing through social media is basically free. Take advantage of letting your followers send out your message for you.
4. Tim Hortons broke out of making coffee and donuts and created a free, fun digital add-on for your mobile phone, keeping its social media marketing patriotic and fun!

To contact the author of this entry please email at: bettycoop99@gmail.com

If you have any concerns to the accuracy of anything posted on this site, please send to Peter Carr, Programme Director, Social Media for Business Performance.