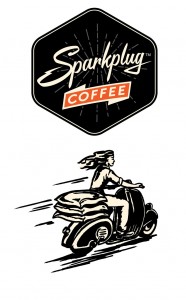 Clang clang clang.  Clang clang clang.  It’s Saturday morning.  My boyfriend is standing in our kitchen tousled and in pajamas, engaged in his weekend ritual.  The components of his prized Italian espresso maker are gleaming and clean, carefully laid out on a dish towel to dry.  The clanging is the sound of a coffee scoop rattling around in the coffee can he’s shaking.  “I’m almost out of coffee,” he says.  There’s an edge to his voice – running out of the beans he likes is well, a bit of an annoyance.  But no need to run to the grocery store or corner coffee shop to restock.    Later that morning, he places an order for espresso on sparkplugcoffee.com.  In a couple of days, a package of  beans, fragrant and custom ground will appear in our mailbox.

Sparkplug Coffee is relatively new on the coffee scene, Founder Kara Isert set up her online shop about a year ago.  But with coffee beans, grounds, pods and instant available in every grocery store and coffee shop in the country, the coffee business is competitive. Retail sales  generate almost a billion dollars in revenue in Canada alone.  But Kara was not discouraged. She decided she could offer coffee lovers what retailers could not:   fresh, top-quality coffee guaranteed to make the perfect home brew every time.  “Sparkplug is about the bean, not the drink.”  And for Kara, the internet is the best way to reach at home coffee drinkers.

Because Sparkplug is new, Kara has been putting most of her social media efforts into establishing  the brand — and she’s not afraid to experiment.  With the help of longtime friend and Content Strategist June Macdonald, Kara has come up with some fun and innovative marketing campaigns that are sure to get her company noticed. 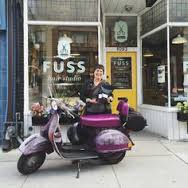 Most of Kara’s customers are consumers, but she also sells coffee to a select number of companies.  After providing coffee to staff and clients at Fuss Hair Studio  in Toronto’s Leslieville neighbourhood, Kara created a special “Fuss Blend” for home use.    The coffee was an instant hit and she received twenty orders without any promotion.  Excited by the interest and happy to be in partnership with a brand she respects, Kara decided to take things one step further by creating a campaign to benefit the Toronto Humane Society.  Here’s Kara with the details:

You wouldn’t automatically associate coffee with a hair studio and an animal charity, but June Macdonald points out that partnerships between companies that would not have gotten together in the past is something she’s seeing more often.  “This is a win-win-win for Kara.  She will get some of the halo effect,”  June points out. “But campaigns like these are really about establishing the brand.”

When Kara was setting up the company, she decided that a scooter would be the perfect symbol.  There were concerns that a scooter would be off putting or too masculine, but Kara held firm.  “I have a vintage Vespa and enjoy riding it.  I liked the image of a scooter zipping through traffic to bring you coffee.” The scooter also provides a fun connection to coffee that may not be instantly apparent.  It’s a throwback to the riders or Café Racers  that would zip from café to café in the 1960s.  The scooter has also created a unique marketing opportunity for Sparkplug, making it possible for Kara to participate in events like the Mad Bastard Scooter Rally.  “In-person events are good for raising awareness, not for sales,” she says.  “The more exposure the better – Sparkplug Coffee swag was in all the rider packs at this year’s Mad Bastard.” 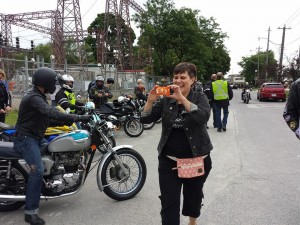 According to June, these types of events are perfect for social media campaigns. Photos are useful of course, and tweets and posts showing “you in action” demonstrate a commitment to the brand.  Kara points out, however, that she always gets the best content at these events when June is with her to help take pictures and gather information.

On the surface, there may not seem to be much of a connection between coffee and Hollywood films either, but with the help of friends, Kara has created a social media opportunity here too.  The podcast the Top 100 Project , is the project of film buffs Ryan and Bev Ellis.  The couple is reviewing more than 100 classic American Film Institute movies – and there’s a plug for Sparkplug at the top of every podcast.  “I haven’t seen results in terms of sales,” says Kara.  “But the podcasts are not time sensitive, so I see this as a longer term strategy to increase awareness.” Ryan and Bev also customize each Sparkplug ad to the movie they’re reviewing.  Go here to hear the spot made for the review of Blade Runner.

With respect to more traditional social media tools, Kara has found that Facebook, Twitter and e-mail are the best for marketing Sparkplug.  These are the only platforms  she has time for at the moment.  More from Kara in this audio clip:

June agrees, “don’t’ try to be everywhere,”  She adds that being selective about the number of platforms is a good way to ensure those in start-up mode don’t spread themselves—and their content– too thin.

Kara has learned that creativity can go far on established platforms.  “You can only put up so many posts about making a great cup of coffee,” she says.  Interestingly, posts with recipes do very well on the company’s Facebook page.  A recipe for ribs made with a coffee rub posted by June, for example, received dozens of comments and shares.

Interestingly, Kara checks analytics, but says she’s not too concerned with numbers right now. She does, however, keep an eye on click through rates, likes and shares.  She currently has customers in provinces outside Ontario, including B.C., Alberta and Quebec and wants to continue to expand.  “How can I engage these communities to get more buzz there?” she asks.  “And how do I use social media to do this?”  Loyal Sparkplug customers know Kara will figure it out, and  legions of sleepy, red-eyed Canadians in need of a good cup of coffee are looking forward to the day she does.