I’ve seen a lot of Molson’s beer ads in my time. I’ve also been pitched to by their sales and marketing reps as the gatekeeper to a thirsty student market when I managed an on-campus pub in downtown Toronto. On the flip side, I’ve been in boardrooms to witness a thankful sigh from record company marketing managers because someone announced that the brand would be sponsoring one of our struggling Canadian rock bands. Ah, the good old days of the Mass Media Age. Back then, a good beer advertising campaign was pretty much:

1) figuring out who was drinking beer

4) making nice with the bars that served your beer and giving them some coasters for free.

Yes.  Beer and Barbecue’s? Absolutely. How about beer and your buddies? Check.

(Cheers!) Let’s give a round of applause to the collective marketing efforts of beer companies everywhere for cultivating the marriage of our lives and their products so that events without their product seem almost, well…uneventful.

In 2013, this corporate video was made to show the highlights of Molsons’ plan for all their brands but it appears there’s something very important missing from their strategy.

What’s Missing? How about beer and social media? Not a mention, even though we see a glimpse of traditional media plans in play. You can read another SMBP blog on Molson -Coors by Candace Berner-Rubie here. In this blog,  she provides research about Molson’s social media strategy from her perspective in 2013.  It’s interesting to see where she saw the strategy going and where we are today comparatively.

At some point between between 2013 when this video was made and 2015 they needed to find a way onto the walls of our chosen social media platforms in order to keep the vibe alive, especially with those organic craft beer companies hot on their heels grabbing up their Millennial marketshare, not to mention a host of other international beers brands ramping up their efforts. 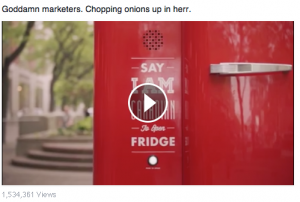 The screenshot to the left is taken from my Facebook feed on Canada Day a couple of days ago. A friend of a friend liked it. As you can see, he has made a heartfelt comment (pardon the french, and he meant ‘here’, not ‘herr’) about how the commercial impacted him emotionally.  I didn’t have to watch it because I knew what it was going to tell me since Molson Canadian has been telling me that ‘I am Canadian’ since the early 1990’s.

Truthfully, I still beam with pride when I see this ad because back then? Budweiser drinkers still wondered aloud if we lived in igloos in their ads in the southern United States. This commercial was ground-breaking stuff and spot on for the social temperature it was introduced in – it was a zag to the zig amongst the ‘beer and babes’ ads that were running at the time and it hit us right between the ads as young beer drinkers flirted with international brands like Corona and Foster’s lager. You couldn’t just command it up when you wanted to share it with a friend.  You had to re-enact it over the campfire at the cottage or make sure to catch it during the hockey games on CBC if you wanted to know what your friends were talking about.  For television advertising, it was really a game changer and Molson sold a bunch of beer and still talk about the impact that one commercial made.  Nicely done.  Canadian fact: Did you know it was inspired by Farley Mowat? True.

Look at the ‘still’ featured on the front of this video above. It features a woman of Asian descent who looks to be around the age of a Millennial. She is overwrought with emotion about whatever it is that Molson has done to make her feel that way, as three woman behind her look on curiously and with glee. There’s a multi-cultural moment about to happen here, and if you’re feeling it.. Molson is going to deliver it to you. When? Ah, On Canada Day no less.  Canada Day and Beer on a patio? Perfect. Again.

The video also features the silly frustration that delights the people of many cultural backgrounds as they try to vocalize “I Am Canadian” in different languages (as a team) in order to crack the code to get a beer? Subliminally, this is marketing magic at its’ best! And with Pan Am Games days away..c’mon.  Slam dunk. 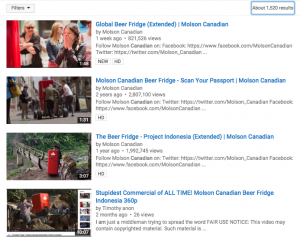 But not everybody thinks these beer fridge ads are ‘all that’. When you manually search for the ad on Youtube rather than viewing it on Facebook as an embedded link, as Molson intended, in order to measure the impact, you’ll find a mere four videos down – someone who is not so impressed with the ‘beer fridge’ concept.

The risk of mixing your medias.

What Molson doesn’t know, nor does my friend who posted it, that just below this post was a tribute from a close friend to her father, who passed away on July 1st several years ago.  I know this family and I know why he passed…and its’ not good news for you, Molson’s.  Yes, that. (whoops, again). Maybe that’s why they initially didn’t have a plan for social media. I also subscribe to a bunch of charitable organizations and health sites that tell me the opposite of what this ad is trying to sell me.  That’s a problem too.

A ‘Canadian’ isn’t a beer, it’s a person but Molson Canadian wants us to believe otherwise because anyone who drinks beer wants to feel good about that choice. It feels forced and contrived. There are places that I would expect to see beer ads, I’m just not sure it’s in my Facebook feed…and if social media is where everybody is, then Molsons’ need to find a way to connect to the interactive Millennial, but bringing out old concepts and dropping them into a new social media paradigm? It’s short-sighted and lacks understanding about what they are really selling.  In my opinion, Millennials are much more savvy consumers and are weary of the smoke and mirrors conjured up to re-direct a brands’ authentic purpose, which is what I feel the beer fridge ad campaign does.

The unintentional marketing story of Bob and Doug MacKenzie.

If the beer companies had a hand in this, you wouldn’t have known. It exploded because it felt like it was created for our entertainment value only, not to sell us beer. But it did. Perhaps not as pretty and patriotic, but uniquely authentic, honest and transparent (and funny!) – that’s social media gold and it doesn’t insult this generation’s widely informed  intelligence.

Nobody disliked the Bad Boy furniture advertisements more than me.  (Noooobody!) But I am writing about it here and if I need a leather couch at a good price I know where to look.  And? I’m writing about Molson’s and the impact they will probably have with this campaign so I may have ignored the post initially but it stuck with me and probably all the other people who saw it but chose not to click-in or like or share.

The Canada Day Beer fridge ad had reached well over 1.5 million views on Youtube by noon on Canada Day and it is almost 2 minutes long! That’s an eternity in this day and age to keep the attention of the intended consumer…but will it sell beer or sell Canada? In the deeply competitive market they find themselves in 2015 it has to be – beer.