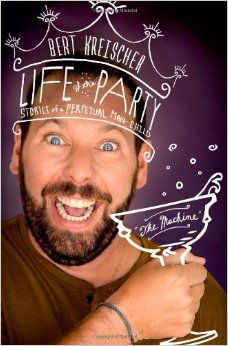 The life of a stand-up comic is like no other. Day after day on the road, performing live…alone….and with the script YOU wrote. That is all challenging enough without the added pressures of being self-employed and at the mercy of the crowd…you better be funny.

Comedians choose this life and if it works out…what a life it can be. The prevailing personality traits of comedians tends to be opposite of the “suit’. Think about it, the escape from the 9-5, the “grind” and working for someone else. This is what makes them who they are, allowing them to live this life and to find the funny. What’s funny is, if they are successful enough, they can become big business! In fact, businesses are learning a lot from stand-ups on how to leverage social media, and to engage online.

Put stand-up comic Bert Kreischer (@bertkreischer)in any social setting and see who becomes the life of the party. If you have never heard of Bert – the movie about the imfamous partier “Van Wilder” was based on his time at college in Florida.

What is social media, if not at its core a simple social gathering online?

Its no wonder businesses are taking note on how to engage an audience via social media and build a following. Comedians are leading the charge on all fronts from Youtube to Facebook , Podcasting and most of all Twitter. Stand-ups are putting peices of themselves (their product) out there for the world to see, free of charge.  Some of my favorite follows are comedians because I get something from following them….a laugh.

Below are 2 examples from Bert’s twitter feed. He is the host of the tv show Trip Flip on the Travel Channel. Bert shares a video of one of his crazy adventures on the worlds tallest rope swing, simultaneously giving his audience something to enjoy, promoting his emplyoer and building his brand online.

In the next tweet he shows the perfect example of the power of social media in marketing…he used a picture from his show as content and is advertising his next tour date for fan’s to come see his stand-up ! Talk about cross promotion.

What we can learn: Be the life of the party!

Comedians are setting the bar for marketing on social media. Whether it’s taking on a heckler, handling critisism, receiving praise or promoting your next stop…

Social Media experts will often advise businesses that “Content is King and to be personable, authentic, funny, informative and engaging”. If you have ever listend to a speaker talk about social media you have no doubt heard this before. They are adivising you to be more like a stand-up comic.