The Internet used to be just about people: sharing, liking, pining, shopping, posting photos, playing games, reading. It was for people and about people. The Internet was the most transformative technology ever invented. We can’t live without it. It changed the world.

As time ticks on, the new Internet is poised to change the world again. Connecting things. Things that can share their experiences with other things. Machine to machine: M2M. Here is Benson Hougland, VP of Marketing for Opto 22, describing this term at a Tedx Talk:

If you do an Internet of Things (IoT) -related web search, and you’ll quickly notice the overuse of the term “smart.” So, what does it really mean when something is smart, and what makes an object smart? How would a refrigerator or a toaster oven for example become a smart appliance? Your old toaster that mechanically controlled the color of your toast now has a micro control unit (MCU) in it which controls the color of your toast. The toaster completes its task more consistently and reliably, and because it is now a smart toaster, it has the ability to communicate with you electronically using its touchpad or switches. After a device becomes smart the next logical step is remote communication with your cell phone or mobile device to help make life easier. Here are a few examples:

Smart Doors:
Brivo Labs – an Internet of Things company creating applications for security management – shows us just one example of how these types of applications can and will be used in our not too distant future. The app uses Brivo’s “SAM” API — SAM stands for Social Access Management and API is Application Processing Interface. The ap is called OKDoor.

As the company’s home page explains, the API “provides developers with the ability to change the way people interact with physical buildings and devices.” Here is an example:

Lee Odess, General Manager of Brivo Systems and VP Marketing at Brivo Labs, speaks at a conference in the following video. He shows how the company pioneered the emerging field of Social Access Management while growing an Internet of Things innovation unit. 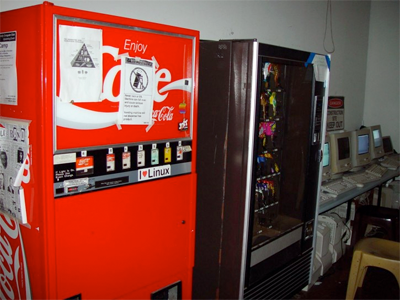 Smart Vending Machines:
Although the concept wasn’t named until 1999, the Internet of Things has been in development for decades. The first Internet appliance, for example, was a Coke machine at Carnegie Melon University in the early 1980s. The programmers could connect to the machine over the Internet, check the status of the machine and determine whether or not there would be a cold drink awaiting them, should they decide to make the trip down to the machine. 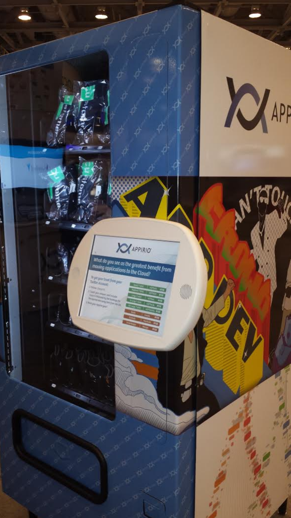 An interesting, okay really cool example of a fun and low risk application that involved social media was a social vending machine that was powered by tweets. It was brought to a conference in 2013 called Dreamforce by Appirio.

It required users to interact with it socially to gain access to some of the “swag” items held within the machine while visiting the Appirio booth. To view the short demo, view it on Appiro’s Facebook post here.

Smart and “Social” Robot:
To mark the 40th anniversary of  BNP Paribas’ sponsorship of the French Open in 2013, the bank worked with We Are Social to design an event that allowed Twitter users to play a game of tennis against Jo-Wilfried Tsonga. Or, more accurately, they could remotely operate a social media-controlled robot that launched tennis balls at Tsonga live on a tennis court. Here is how it worked: 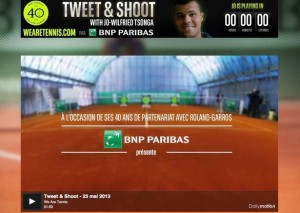 After logging into a microsite through Twitter, users could drag-and-drop a tennis ball on a virtual on-screen tennis court to adjust the positioning of their shot. The on-court robot, connected to the internet and Twitter via 3G, then selected users’ tweets at random and fired tennis balls at Tsonga, with each shot mapped precisely to the positioning of each user’s choosing.

The user’s shot was then encoded as a hashtag and placed into a tweet from them, to which they could add a personal message to Tsonga before it was sent. Here is a video on the project:

They received 5,865 Tweets, and over 180,000 viewers and media attention on numerous websites like Advertising Age.

Just as the Internet phenomenon happened not so long ago and caught like a wildfire, the Internet of Things will touch every aspect of our lives very very soon. Are you ready for it?

1. The Internet will greatly transform our lives via the interconnectedness of all the devices, services and appliances we use in our daily life. It is predicted that by 2020, nearly 26 billion devices will be on the Internet of Things.

2. Will our toaster be able to read our minds? Not quite, but managing our home life, could be as easy as the touch of a button, or the blink of an eye.

3. The mobile experience could be the difference between success and failure for many products.

To contact the author of this entry please email at: bettycoop99@gmail.com