Chipotle started out as a small idea from a man named Steve Ells. After completing his education at the Culinary Institute of America, Steve saw the potential in selling low priced Mexican cuisine. The first Chipotle restaurant was opened in 1993 in Denver, CO. After one month in business the location was selling over 1,000 burritos a day. Within the next 5 years Ells successfully opened another 4 locations.

Their big break came in 1998 when McDonalds made an initial investment in the small chain of restaurants. By 2001, they had become Chipotle’s biggest investor and the small Mexican fast food restaurant jumped from 16 locations to over 500 within a 7 year span. Now a days, Chipotle sells to over 750,000 customers a day worldwide at more than 1,500 locations.

Transparency at its finest:

The world of food is changing around us. Whether its on our own table or at a restaurant, people want to know what they are eating. The organic food movement and full disclosure regarding where, when and how different ingredients are brought to the table has become a norm in our society. Chipotle saw the ongoing trend and decided to do something about it.

Chipotle took a big risk in March 2014 and labeled all the ingredients on their menu including GMOs. By doing this they set history as the first fast food chain to voluntarily show GMOs in their products.

“If anything, it engenders more trust when you’re more forthcoming about the food you serve,” Chipotle Spokesperson.

Not only did the chain decide to show the general public what exactly went into their food, but this was a first step to eliminate as many GMOs as possible moving forward.  In 2013 alone they served up to 15 million pounds of local produce. Today, Chipotle claims to be GMO free. The fast food chain now uses organic ingredients where possible, antibiotic-free beef and sustainable pork.  Customers can check out the Chipotle FAQ sheet for a better understanding of what they are purchasing and consuming. 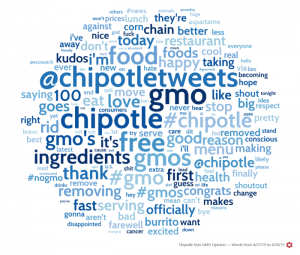 Chipotle decided to showcase their farm-to-table marketing campaign through a number of social media outlets. One of the most effective outlets was a video that was created by Chipotle to shed some light on the future of fast food. The goal of the film was to bring awareness to the general public regarding processed foods and show the ongoing commitment Chipotle has to creating “Food With Integrity”.

Chipotle has also created “the Chipotle Cultivate foundation” which focuses on creating a sustainable, healthy and equitable food future. The fast food chain has put in over 2 million dollars through this foundation to help fund different initiatives for sustainable agriculture. 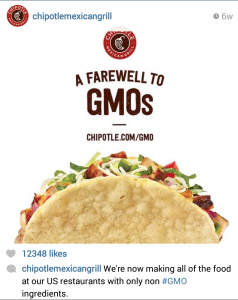 The Mexican food chain supports local events like “Cultivate Festival”. These are free events with live music, food and activities. It’s a day of fun, but also the events are set up to educate people on how different foods affect your body and further detailed information on creating a sustainable food future. Event info can be found on all of Chipotle’s social media outlets. 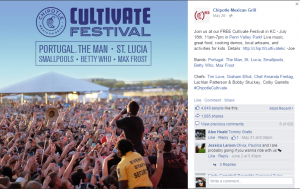 It’s a risk for a company to pursue transparency as Chipotle has done, but in their case it’s credited a huge reward. Here are some of the pros and cons to the Chipotle GMO free menu strategy:

1. 42% of the response to the online campaign was positive, while 31% was negative.  Overall the campaign did not hurt the brand, but the negative risk was certainly there.

2. Being open and honest with your customers can lead to larger changes in the way the industry works. Chipotle being the first to go GMO free makes them an industry leader which has proven to be very profitable.

3. The campaign was mainly based around scientific facts regarding hormones and other genetically modified ingredients. This type of information given to the public can create unnecessary anti-GMO hysteria and negative media around your brand.

4. A larger discussion can be created around the farm-to-table movement both for and against. The sound clip below digs further into this trend and what changes need to be made.

5. Distrust can be created with this type of campaign if the public feel they are being deceived. The food served at Chipotle is now GMO free, but other items such as their beverages are not.