Fallout is a series of post-apocalyptic role-playing games, created by Interplay Entertainment before it was acquired by Bethesda Softworks in 2007. Previous games in the series include Fallout 3 (2008), which won multiple awards including IGN’s Game of the Year for 2008, and sold over 4.7 million units in the 1 week period following its release, earning over $300 million in sales. Fallout: New Vegas (2010) was met with similar acclaim, selling over 5 million units at launch and earning another $300 million.

It’s been five years since the last Fallout launch, and to say that Fallout 4 is much anticipated by fans and the gaming community would be an understatement. In December, 2013, a hoax countdown to Fallout 4 launch spawned almost 1500 comments on one subreddit thread alone, and caused the Fallout subreddit to trend for several days, passing 100K subscribers. Fans use social media like Facebook, Reddit, and Twitter to share Fallout reviews and experiences, make predictions for future games, and request features or updates.

Bethesda announced in February they would host their first E3 Conference in 2015, scheduled for June 16th – 18th, prompting more hype around what games they would announce and whether Fallout 4 would be announced. However, when the Press Invites went out for E3, Fallout 4 was conspicuously absent.

All this explains why, when Bethesda posted this tweet to @BethesdaStudios on June 2nd, it caught everyone by surprise and the news spread through the gamer community like wildfire. The tweet is not even an official launch – just a load screen image Fallout fans will recognize, and a link to a page with a Fallout inspired message: “Access Error: Vault-Tec Central Mainframe has been restarted. Please attempt re-access. Have a pleasant day.” 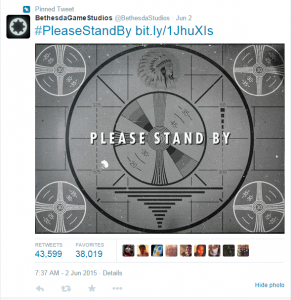 In doing so, Bethesda used their own Twitter account to engage fans where they were in advance of the E3 Conference – fans who took this news, retweeted it almost 45 thousand times, favourited it 38 thousand times, and left Twitter for all the other fan-made artifacts – pushing /r/Fallout to become the fasting growing non-default reddit on June 4th and spurring all video game coverage sites to scramble over each other to publish Fallout 4 articles and hype.

The tweet was accompanied by a countdown to June 3rd, and at its completion Bethesda released a trailer on YouTube (currently with over 9 million views and almost 60K comments), and screenshots of the game.

Rumours abound about a potential E3 gameplay video, potential game features, whether there’s a new game engine that will fix the (notoriously buggy) problems of previous games, and whether the game will hit shelves in time for the 2015 Christmas season.

They’ve basically ensured that Fallout 4 will be the primary focus of gamers leading up to E3, traditionally a time where all game developers compete for the limited attention of fans and news outlets.

Here are some things that Bethesda has done by using social media to announce Fallout 4:

Not all companies own multi-million dollar game titles that gain this much hype in such a short time, but all companies can learn from the Fallout 4 announcement – in particular the ‘rules’ of social media – meet your audience where they live, speak their language, and don’t use social media as an ‘ad hoc’ strategy – understand the environment and leverage it when making announcements or launching new products.

To contact the author of this entry, please email at: mmaw@uwaterloo.ca