Canadians Don Triggs and Allan Jackson had been in the wine and beer industry since the 1960s when they were both employed by John Labatt. When Labatts opted out of the wine business in 1989, the two businessmen bought them out and became the owners of four Canadian wineries. It wasn’t until 1993 when they launched their very successful Jackson-Triggs label.

The Jackson-Triggs winery is located on 11.5 acres on the edge of Niagara on the Lake, Ontario.

The meticulously tended vineyard features three classic varietals: Chardonnay, Pinot Noir and Riesling grown from vines custom grafted in France. They also have a beautiful open air lobby for the public to wander through after they have visited the vineyards and of course the wine shop. 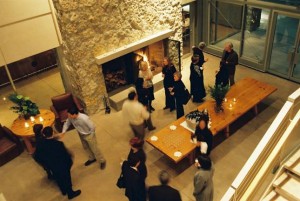 Jackson and Triggs opened the winery around the time when the world wide web was cutting its teeth on home computers, and email and chat rooms were more water cooler chatter than actually used in the office. Today, the business is run by the worlds largest wine company Constellation Brands, (NYSE: STZ and STZ.B) based out of New York state and Mississauga, Ontario.

Its website claims Jackson-Triggs is the “Canada’s most awarded winery.”  Over the past fourteen years, Jackson-Triggs’ wines have won close to 1,500 awards across western Europe and North America. It has been voted “Best Canadian Winery” an unprecedented 21 times in International and Canadian wine competitions.

But lets look beyond Jackson-Triggs’ popular award-winning wine. Behind the vines, grapes, casks and bottles is the team that engages its customers successfully through Social Media marketing.

Jackson Triggs’ Facebook page, with an impressive 114,000 likes, seems to become a busy hive of activity as soon as a photo, story or special is posted. They post at least once a week, and the conversations and engagement is immediate and friendly. For instance, when the winery posted a new television commercial about its boxed wine, they received 172 likes, 31 shares and over 30 comments. Even the woman who sang the song (Adaline Sings) posted a comment and shared the video on her Facebook page.

Jackson-Triggs is quick to comment, thank or answers any questions that followers have posted. Someone even listed the benefits of buying boxed wine for taking to the cottage. Two minutes later, Jackson-Triggs responded to the post: 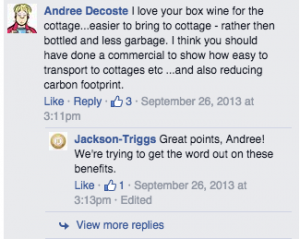 This customer received the satisfaction of sharing his positive comment to the commercial, but also made a suggestion on how the commercial could be improved, to which Jackson-Triggs immediately responded. The winery has made customer engagement a two-way street using social media which can only benefit the company in loyalty and sales.

The winery also posts photos on Pinterest and then links it to their Facebook page. One photo elicited a comment from someone in southern Alberta during the flooding in June of 2013. Jackson-Triggs responded with a very heartfelt reply: 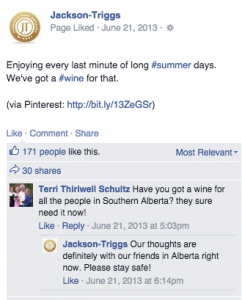 Customer engagement doesn’t lie solely with the company’s winemaking. Jackson-Triggs also has an extremely popular Summer Concert Series that was launched in 2001. Entertainers such as Sam Roberts Band, Barenaked Ladies, Alan Doyle and John Mann, to name just a few, have performed on the stage that is set in an intimate outdoor amphitheatre amid the grape vines. Tickets are sold on-line and concert-goers await by their computers and mobile devices in anticipation of the announcement of the season’s line up and then when tickets are available to purchase. 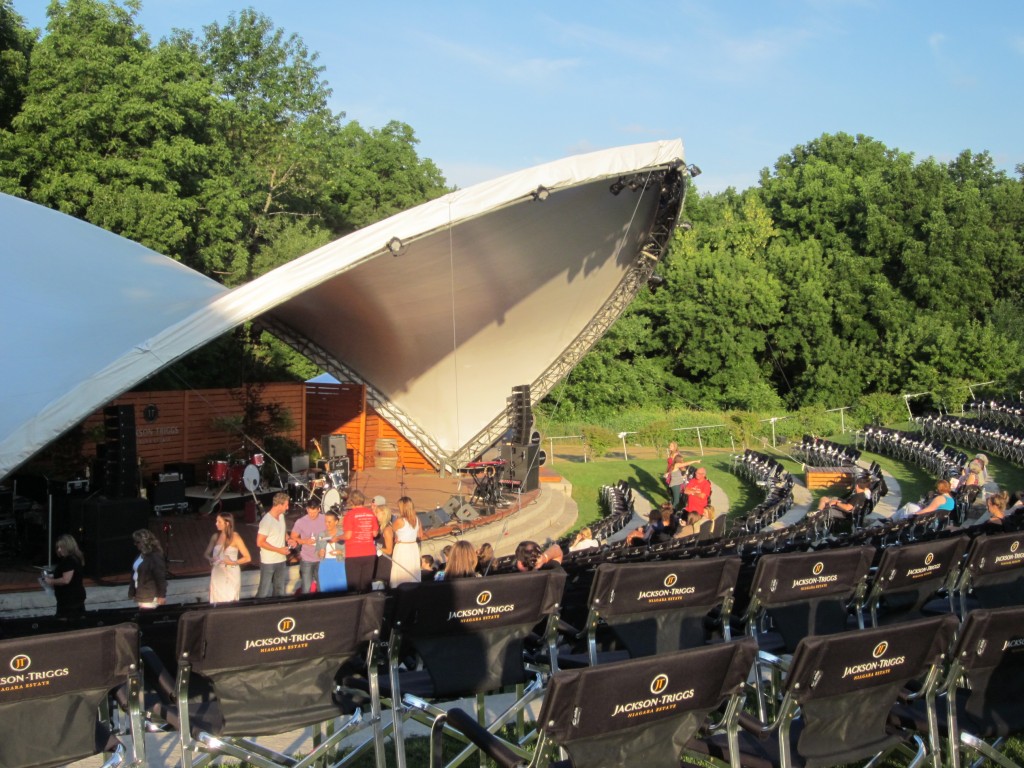 The winery’s Twitter account, launched in 2011, now has almost 5,000 followers. They currently are promoting an on-line auction where followers can bid on two tickets to see Canadian singer/songwriter Chantal Kreviazuk at their sold-out summer concert series. The money raised goes towards the charity War Child Canada.

Jackson-Triggs sold more than 1.8 million cases of wine in 2014, according to Constellation Brands Annual Report, and sales jumped 19%. Their social media program is helping to keep customers engaged, entertained and thirsts quenched!

To contact the author of this entry, please email at: bettycoop99@gmail.com