Today we celebrate Canada Day, and; it is with incredible honor, and perhaps a touch of synchronicity, that I have chosen the great Glenn Gould as my focus for this independent study for the collective blog on Social Media Metrics. Wait. Time out. Glenn Gould?? Metrics and Measurement?? Absolutely. In fact he touches on the topic of measurement in the quote below:

“The ability to portray ourselves in terms of those things which are antithetical to our own experience is what allows us not just a mathematical measure of the world in which we live (though without the negative we would not go far in mathematics) but also a philosophical measure of ourselves; it allows us a frame within which to define those things which we regard as positive acts.”  Glenn Gould (Reference)

Do you know Glenn Gould? 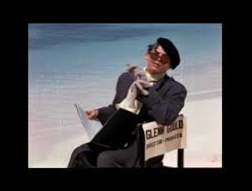 If you haven’t googled Glenn Gould before, I suggest you try it. If you think you’ll find a nerdy Canadian Pianist? YOU are in for a real treat. Fan pages, Twitter pages, Youtube videos, articles from the New York Times, and a zillion places to buy his music worldwide is what you’ll find. He’s not Madonna, but if you are into classical music, he might be Elvis.

An already developed base of fans, likely with good intention, volunteering to share every little piece of media that exists on Glenn Gould?? That’s a challenge in and of itself for any musician these days…but we aren’t going to explore that here. We’re going to talk about why anyone would want to measure the metrics of a dead Canadian pianist.

Faye Perkins, a colleague of mine, had been working with the Glenn Gould Estate for many years when she asked if I could take over the online Twitter presence for Glenn Gould Limited, an entity meant to expand the brand of Glenn Gould. The account had been started but not actively used for marketing or measuring, but more of a slightly used communication tool. The Estate knew they needed to get into the Social Media game because they knew that Glenn Gould was being shared via several social media platforms and; like many organizations, they hadn’t really acknowledged the power of a new marketing economy that would be spearheaded by Social Media. I was honoured that she trusted me with the responsibility, but there was some careful thinking about the limited resources available and whether they should be spent toward social media.

“Glenn Gould Limited is an incorporated company started by Glenn Gould in 1960 that shares, promotes and protects Glenn Gould’s artistic legacy.  It is “Glenn Gould on Glenn Gould.” Faye Perkins 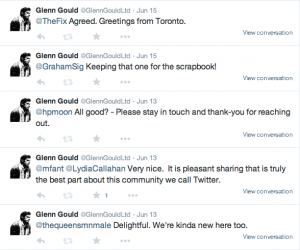 I guess you could say that I am an official “Twitter ambassador” for one of the most prolific and respected pianists of the 20th century. Glenn Gould is on my mind every day as I fashion interesting tweets that keep his legacy current and exude the essence of the man and his music for the entertainment of his Twitter following on behalf of the Estate of Glenn Gould. 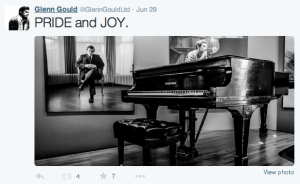 Measurement is organic at this point as we slowly allow followers to discover us everyday and hopefully, capture their imagination allowing for the “the right eyeballs” (Ref: Radan Practical & Social Media Measurement and Analysis) for the Glenn Gould brand. We don’t #hashtag and we don’t retweet. That was a collective decision by Faye and myself, believing that it would exude a personality that was consistent with Glenn Gould.  We also follow back most followers, because this was in line with Glenn Gould’s vision of equality and community. We want to hear about them, if they are willing to hear about us. We also keep the tweets to a small amount of easy words that are meant inspire and teach the audience about the personality of Glenn Gould and it is easier for our international followers to understand.  We use words that he would use and the tone and politeness that is known from Glenn Gould.  We introduce ourselves with “Greetings from Toronto” to subtly suggest his roots and also to appear in any searches for “Toronto” on Twitter. We search daily and “digitally hug” followers who are talking about Glenn Gould, favourite or if appropriate reply in a manner that is in the same humour as the icon.  In many ways the dialogue has opened up from disciplined classical music followers to music followers who are willing to learn about Glenn Gould. We can see that by the profiles of the followers and it provides us with a previously unknown window of who a new Glenn Gould customer might be providing information that wasn’t available to us previously using metrics from traditional marketing data, which for Gould was largely drawn from retail sales.

Glenn Gould is also on the mind of several other people who are appointed with the responsibility of guarding the integrity of the man, not to mention,  the vast musical library he left behind, when he died in 1982, just days after his 50th birthday.

There are a few entities that would be interested in the measurement of Glenn Goulds’ presence on social media. Sony Music Classical is interested because they are the licensed distributors of his musical releases. There are also charitable Foundations that are interested because his likeness and brand are aligned with their charitable movements. In fact, the majority of Glenn Gould’s earnings are given as an important contribution to charitable organizations such as The Humane Society and The Salvation Army. You can read an interview with Stephen Posen, the sole executor of his estate here in which he talks about why Glenn Gould donated his earnings to these causes.

We can say that earnings on Glenn Gould is consistent in the low hundreds of thousands per annum. The main goal is to keep generating income for the beneficiaries through stronger branding and licensing revenue streams. The market for Glenn Gould is quite niche, with the majority of his consumers over the age of 50, which as we know, is the smallest segment of the population engaged on social media (**Reference: Social Media and Product Innovation/Kalypso White Paper by Bill and Amy Posten).  This is not to say they are not on Social Media, but rather that they are not participating, instead choosing to be spectators of social media, so metrics are hard to nail down to rationalize the ROI of a social media campaign. Enter: Glenn Gould Limited.

With an artist that doesn’t tour, give interviews or create new music – how do you keep the legacy alive?

The video above is the brand new album from French DJ Nicolas Godin from the popular electronic music duo Air. This new project is based entirely on the music of Glenn Gould, which he cites as an inspiration. You can find more information on this project here.  (which is admittedly my own blog about –  You guessed it! Tweeting for Glenn Gould) 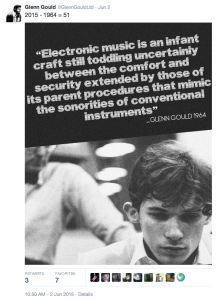 As mentioned above, the majority of his existing fans aren’t participating on social media.  It is however;  one of the few markets left that can be met with traditional marketing plans. We also know that Millennials represent the largest population participating on social media –  so new projects, like the ones above created by a younger generation in the name of Glenn Gould provide Glenn Gould Limited with a way to connect with this audience. Briefly, we need to understand if Glenn Gould’s legacy is still relevant in a musical spectrum that has evolved into a territory that is still recovering from a massive evolution and using social media as a tool can help us deliver this data.

Fortunately, Glenn Gould was a futurist who predicted the popularity of Electronic Music. He stopped performing live to concentrate on the studio and the technical aspects of music.  It is because of that instinctual shift that Glenn Gould Limited now has something they can work with to bring Glenn Gould to a market that participates in Social Media.  Glenn Goulds’ fascination with new technology connects the new audience with the existing audience intriguing a new generation to discover Glenn Gould and his uncanny ability to predict the future of music, without abandoning his original audience. An exploration of EDM music would make sense to all Glenn Gould fans. Not your average concert pianist huh? Glenn Gould Limited believes he deserves to be brought into the future and I agree. 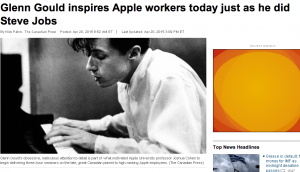 Did you know that Steve Job’s  Apple University uses Glenn Gould’s Variations as a teaching tool to illustrate the way he wants his executives to execute their ideas? True.  Talk about a platform with which to measure a social media audience! 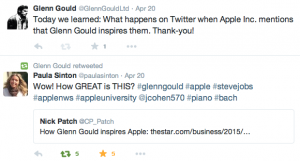 You can read more about Glenn Gould and Apple here.

The future of Glenn Gould’s brand lies in the imaginations of the people who have chosen to discover Glenn Gould Limited.  Traditional lead generation is really just idea generation that is now manifested on the walls and the feeds of Social Media. The more we can share the breadth of the man we know as Glenn Gould to an audience capable of creating art in the name of his brand, the more opportunity Glenn Gould Limited has to capture useful data.

Eventually, Glenn Gould Limited will expand to include an official Youtube channel and will use the Twitter platform to market project releases.  At present, the plan is just to re-introduce Glenn Gould to a whole new world.

and finally, Greetings from Toronto.