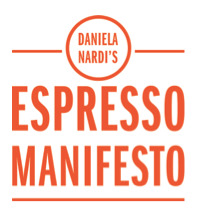 Espresso Manifesto was born out the personal passion of Canadian Jazz artist, Daniela Nardi, to inspire awareness of her Italian cultural roots though live musical performance and speaking events. See Video: Espresso Manifesto for a glimpse of the projects’ essence and message.

“Italian music, art and culture are well known and loved all over the world,” Nardi explains. “Most global citizens can hum ‘O Sole Mio, recall a Fellini film or describe the Mona Lisa, but there is so much more going on in Italian culture. I want to shine a light on the new and different traditions, and I want to help create some more,” she adds.

The Espresso Manifesto Project is: 1) an album recording 2)  live musical show and 3) a speaking series.  They all work together to compliment each other and provide lots of content for its’ social media campaign and to keep its’ tribe engaged over the course of the album release, which can last up to 2-3 years.

We are going to focus in on the Speaker’s Series for the purpose of this case study. Salone Di Cultura is a ticketed event that occurs quarterly each year and is held in downtown Toronto. This event is an opportunity to gather the intended targeted audience with the collective goal of creating an Italian cultural movement designed to inspire and also to bring attention to her live music shows and musical recordings inspired by Italian musicians.

Salone Di Cultura is promoted through the Espresso Manifesto Facebook and Twitter pages that have been cultivated for over 5 years.  There is a WordPress blog dedicated to Salone di Cultura which is featured on the Espresso Manifesto webpage. For an event, a social media platform is a tool used to entice an existing audience to return with a view to attracting new fans so that they can present bigger and bigger audiences over time.

Tribal Yell: Expressing the reason for your movement in a personal way is a great way to connect with your customer and social media audience.  In this video, Daniela reaches out to her tribe and authentically communicates her reasons for the event.  She expresses how she feels about being an Italian Canadian. Her exploration can help her discover new fans through her Youtube channel to find like-minded people who may want to attend her her event.

Cost Efficiency: Today, not only are social networks a part of marketing and PR plans, but more often than not they drive the plan.  And? most importantly they are a cost-efficient way of promoting the event.  Given the costs of marketing, very few venues and promoters will commit to significant marketing spends to support a live event, instead, relying on the performers or speakers to activate their fan base via social media.

Timing: The social media campaign should begin about 2 months before the actual event. A good start could be to reflect on the previous event to showcase what the potential ticket buyer can expect for the next one. 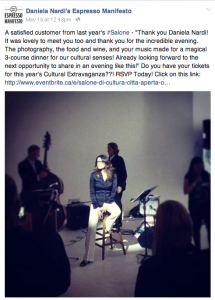 Highlights from the last event is a great way to begin promoting your upcoming event on social media .

Conversation: You’ll need to keep the conversation from the beginning of the campaign through until the actual event.  During this time, the goal is to build anticipation and develop  a story that will entice your ticket-buyer to start thinking about whether they would like to go and who they will invite to go with them. A great way to build excitement is to engage  members of traditional media about your event on a social media platform that you are both active on. You can also engage other social media events that pertain to your own event mandate.

Engaging traditional media partners in your event can elevate exposure to their audiences.

Illuminating Community events that align with your event mandate can help to target your audience.

Channel Partnering: Espresso Manifesto can also create a buzz for their events by creating social media channel partnerships with the collaborators involved in the Salone Di Cultura event.  Each event has many participants who will likely have a social media presence.  They can include: the event space, each of the musicians, the speakers, the caterers, the publicist, the management company, the sponsors, the event ticketing agents etc. It’s wise to choose participants who have a social media presence so that you can reach into their audience in addition to your own, hopefully inspiring them to  them re-tweet/post to their own audiences. 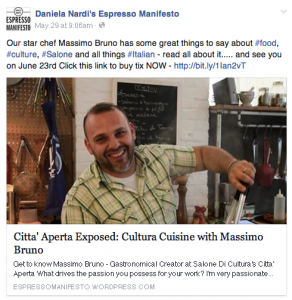 The chef will also promote on his own Facebook page. 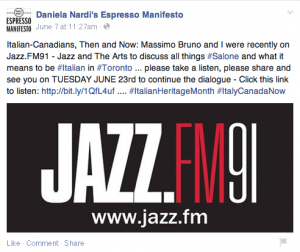 Traditional Media plays a role and has a large social media audience. 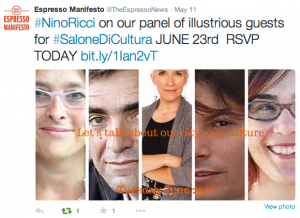 Choosing speakers who have engaged social media audiences of their own.

The final push: We’re down to the wire, the event is a week away!  Hopefully your tweets and posts will be about your event being sold-out! but if not – you can up the Social Media effort by having the Speaker’s do video snippets with personal invitations. Here is an example of  playful video that can be used a few days leading up to the event.

During the event: Pictures, pictures and more pictures.  You’ll want them to showcase post-show and for the wind-up for the next event. Hire a good photographer who will encourage ticket buyers to pose with the Speakers and the Host, in this case – Daniela Nardi. You’ll also want event attendees to take pictures themselves and post them to their social media platforms. You can ask the host of the event to mention the #hashtag and ask them to @mention you.  You will then re-tweet this to your audience post show. You could additionally have signage behind the Speakers directing the audience to your Social Media platforms. It adds another “live” layer – a digital keepsake that engages possibly even more ticket buyers in the future.

Post-show: The story needs to continue so that your social media audience can see the end of the story.  Hopefully there will be reviews to post!  And? Your ticket-buyers will want to see pictures of themselves from the show on your social media pages and sponsors will want to see pictures of who attended that will prove to them that their money was well spent.

Other Resources: An excellent example of a step-by-step social media plan for events was prepared by the Event Social Media Examiner.  In this short how-to article, the author gives the reader tips about what an event planner can do to “push” market an event out into social media platforms. Although I believe that it is part push, but mostly Social Media personal engagement that encourages your audience to come out and support your event.

And finally: When a social media campaign is properly executed, you can inspire loyalty that will be unwavering not only as event attendees but also as promoters of your future events.  A social media base is the foundation and using your cultivated network in tandem with your social media communications tools is vital to engage your potential customer.

Prepared by: Paula Sinton for Business Performance for Social Media