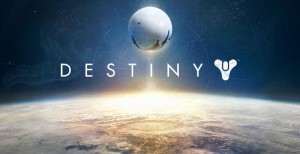 Give your customers what they want.

It sounds overly simplistic… because it is. The Destiny™ developers understood their market prior to the launch of one of the most highly anticipated video games of all time. They launched a beta test just to add to the hype. Keep in mind, most games do not do public beta testing and if you’re not confident in your product already, this can be a big risk. If things are bad, everyone will know and your hype will have disappeared before anyone had a chance to spend a dime.

By releasing the (already heavily tested) beta, the developers included their customers in the process (why pay testers when the market is dying to help) and they also helped drive the hype for their product! Talk about a win-win.

In the beginning,  you needed a code to download the beta version and test it out. This “exclusivity” made for even more of a frenzy. Of course you could always get a code by pre-ordering the game and they would provide you with a couple of codes to share with friends …even more “wins”

Eventually, everyone was able to download and try the game , and 4.6 million people did.

“We surpassed even our own goals and the feedback was invaluable.” Pete Parsons – COO Bungie Studios

The many uses of social media !

With all these users, spread around the globe, the company was able to gather feedback and respond to inquires in a public forum using social media. Meanwhile they were building an online community, and creating conversations related to their product. Twitter accounts @destinythegame and @bungiehelp still continue to engage the customer base in troubleshooting issues and providing constant realtime feedback for online multiplayer issues. 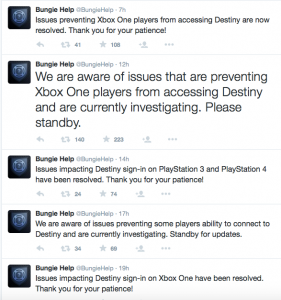 “Gamers seem to like being involved in the development process”

For additional context on how in depth some of this feedback can be, check out this IGN review of the game :

Social Media has become an integral piece to video game develoment and design. Now more than ever developers can have open lines of communication directly with their consumer base and can design a product the market wants. Often business are taking educated guesses on what a potential customer needs. Nobody NEEDS a video game (well depending who you talk to) so why not ask what the customer wants and how you can improve ?

Destiny™ is often compared to the wildly successful Halo™ franchise of games. The much anticipated  Halo 5™ was recently announced at the Electronic Entertainment Expo (E3) and gamers were given a preview of gameplay :

A quick browse of the landing page of their website shows that there are building the community early. Taking a page from the Destiny™ playbook.

It will be fun to watch the final phases of development leading up to the big release – and the role social media is going to play .