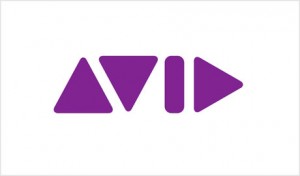 Television editor Mike Stewart was frustrated.  He was editing the episode of a television series and had run into a problem.  He had repeatedly tried to get the editing software to generate an onscreen title, but was having no luck.  Frustrated and with a deadline closing in, he vented on the Twitter account belonging to AVID, the company that makes the editing software he was using.  The reply he received was not what he expected:  “Why don’t you join the beta testing program?” The person behind the reply was Keith Gerrard, the Senior Creative Products Video Beta Coordinator.

There are a number of different software products editors can choose to edit films, television shows, commercials or news spots but Media Composer, the software that gave Stewart the problem on that trying  day,  is considered by many editors to be the best.  The first of its kind, it was released by AVID in 1989, when software and hardware limitations made editing slow and clunky by today’s standards.  Editors using Media Composer today are using version 8.4 – a version developed, to a great extent, by their peers through AVID’s beta testing program.

Beta testing, the practice of releasing software to a select group of end users for their feedback prior to general release, was introduced by IBM in the 1950s.  According to AVID’s Keith Gerrard, the Media Composer beta program has been around for more than 15 years.  He has been in charge of it for almost nine.  The program’s long life means that Gerrard doesn’t actively recruit instead, he has a pool of approximately 100 regulars he can draw on.   He also takes on new testers on an as needs basis.  These  may be referred by company representatives in the field or selected from the messages they post on the AVID community boards.  Interestingly, a subset of the beta testing group is usually made up of testers that are in what Gerrard calls “informational mode”.    These are often resellers or high level customers.  They don’t provide feedback, but are party to the comments from the core testing group.  The work flow looks like this: 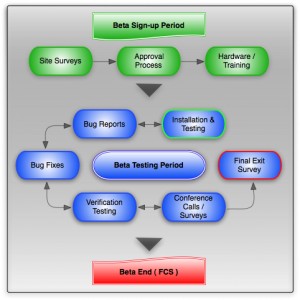 Beta testers who work for AVID commit to using the test software for a certain number of hours per week.  They provide feedback largely by answering questionnaires and posting comments, questions and requests on an internal forum.  Different threads are set up for different discussions, and some reports are prioritized through a numbered ranking system.  Stewart did take Gerrard up on his offer and became a beta tester.   He explains why in this audio clip.

Stewart says the testers are collaborative and “really talk to each other”.  On the forums, feedback is always technical and honest.  Gerrard says testers are direct but keep the boards professional “because testers realize they are talking to other professionals”.

Stewart experienced the power of beta testing during one test cycle a couple of years ago when he made a “feature request” asking that the software be changed to include a feature that would allow him to adjust audio levels with a quick mouse click.  Other beta testers made the same request and the feature was included in the next generation of Media Composer.   “It was great to see AVID respond so quickly”, he says.

This quick response to a request is not only evidence that AVID’s beta testing program is working well, it means the company never forgets that their beta testers are, first and foremost, customers.  This customer service or support based approach is important to Keith Gerrard.   In addition to his technical expertise, he has a background in customer support and believes an important part of his role is to champion the needs of his customers.  “Editors work long days and our software is their bread and butter.  We do everything we can to get the best fix.”  This is critical when you consider that support is a huge part of the total customer experience in IT and that consumers rank support second in criteria when selecting a technology.  In other words, customers buy software when top notch customer support is part of the sale.    The human touch is also a big deal in beta testing – even when the product  is software and the testers are dedicated computer geeks.  Over the years Gerrard has developed close working relationships with a number of testers – some have even sent him wedding and baby gifts.

In addition to overseeing the inescapable bugs, glitches and fixes, Gerrard has also experienced the satisfaction of knowing his beta testers contribute to greater innovation at the company.  Application Manager, a feature that helps to manage downloads, licenses and some small add-on devices “is significantly different from the original version because of beta tester feedback” according to Gerrard.  The feature was initially only offered for Media Composer, but is now being rolled out across the AVID product line.

If you’d like to see how much time an editor typically spends using Media Composer when working on a one hour episode of a scripted series, watch this fun video from one of the editors of the  series “Chuck”:

The collaboration that results when using social media for beta testing can make for efficient and cost effective product development. Companies that conduct beta tests with customers where a primary goal is solid customer support can also create long lasting and mutually beneficial relationships.