This weeks’ blog topic  ‘Supply Chain Management’ couldn’t be further from my past work experience or for that matter – current abilities.

In the entertainment business, we have a supply chain management system but it is more along the lines of ‘project’ or ‘event’ management.  We are asked to pull together talent for the purposes of producing an event quickly with deadlines that are mostly un-yielding. Like a product, there are several components that need to be organized and communicated while in the process of ‘manufacturing’ the event. Imagine co-ordinating a symphony of several different instruments, musicians, producers, composers, event management, graphics, media, social media etc. There’s a way we do it to keep everyone in the loop as we build toward the date – and for this we use a cloud based social system called Basecamp.

And then it hit me. There must be companies that use this incredible system to move products along their supply chain system.  Inspired, I logged into the Basecamp website and found a company called Budnitz Bicycles. I had never heard of the brand before. Wow, I sure know who they are now!

Budnitz Bicycles creates a fast, light, and what critics have said is “the most beautiful city bicycle in the world”. They are manufactured in titanium and crumbly steel.  They are handmade, designed to last a “lifetime” and; as the website quips “are a blast to ride”.  You can read more about Budnitz Bicycles here.  Or even better – watch this incredible film/ Video. It exudes the passion of the brand and? no word of a lie, it made me cry.  (But be warned: You may want one and they retail for over $2,000 at minimum.)

Who is Paul Budnitz?

Paul Budnitz learned a lot about supply chain management when he started a company called Kidrobot in 2002. The company is described as an ‘art toy emporium’.  The company grew rapidly from just two employees to 90–and from $300,000 in sales to more than $15 million. He designed and refined software, wooed artists, ran marketing, traveled to China to settle disputes with suppliers, and generally worked all the time. Eventually, he had to hire, train and bring new collaborators into the foray of his business quickly in order to expedite his product to meet consumer demand.  This is when Paul Budnitz originally met Basecamp.

Kidrobot uses Basecamp to communicate with suppliers and distributors over four continents with hundreds of active projects.

In The New Instant Companies, Business 2.0 describes “how todays startups are going from idea to a $30 million hit — overnight.” The article talks about how Kidrobot, a retailer of limited edition art toys and apparel, saves tens of thousands of dollars and tons of time by using Basecamp to collaborate with its engineers in China.

Briefly, Kidrobot’s designers would first sketch the characters using Adobe Illustrator. From there, they would move to Basecamp. Budnitz and his team would share the Illustrator files with engineers in China who would transform them into clay or wax models. One week later the models would arrive in New York. With Basecamp acting as the messenger, the two sides would repeat the back-and-forth until the toys met Budnitz’s approval. The final design — along with specs for paint and form-fitting packaging — would then be uploaded to Basecamp, and 30 days later finished toys march off production lines in China.

“I can have as many as 40 toys in various stages of production at one time, and we can still manage all of these projects with just a few people”  Paul Budnitz

Back To The Business of Bicycles. 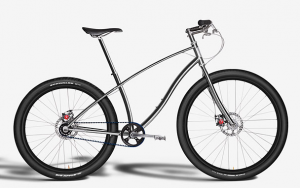 With a proven system such as Basecamp in place, Bidnitz Bicycles to allows customers to build a top-of-the line custom bicycle using an online purchasing interface. Just-in-time production allows them to ship custom orders within just a few days. All bicycles feature top-end components, the majority developed for bike racing by small boutique fabricators in the USA, Europe & Japan. Does that sound like a company that has a need for a strong supply chain management system? It sure does.

So how does Budnitz Bicycles manage their supply chain management system to support such a quick and custom manufacturing process? They do it with Basecamp.

There’s not much I can add to the above video to illustrate how Paul Budnitz uses a social platform like Basecamp to build his beautiful bicycles, except (of course) BRILLIANT!

The only lesson I took away from researching this company is that every company should be using Basecamp regardless of industry.  It is a simple system that is clearly behind several success stories and made supply chain management a wonderful topic to research (even for me).