Title: Afghanistan – not all bad news!

In November 2013, Afghan Zariza (Millennium), a first-of-its-kind news and current affairs magazine was born in Afghanistan, seeking to provide cutting-edge reporting while redefining journalism in the war-ravaged country.

Afghan Zariza was launched a year after thorough research and market analysis, which found that it must fill the vacuum in a lacking print media market while maintaining a strong presence online. 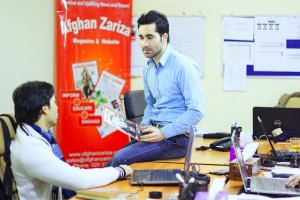 In an email interview, Zafar Mehdi, Afghan Zariza’s editor put the magazine’s purpose into context, saying: ‘Most of the news flowing out of Afghanistan is based on half-truths and propaganda. Our aim is to give insider’s perspective on Afghan issues with more clarity to both Afghan and international readers. We wish to become the voice of ordinary Afghans and tell their untold stories to the world.’

While Afghan Zariza exists as an English-language online and print magazine, it also aims to reach Afghans themselves through its online and print presence in the Dari and Pashto languages. So how does the magazine overcome the challenge of reaching out to this latter audience, especially in a country where social media is a fairly new concept?

Zafar describes it as ‘a Herculean task’ for the magazine to reach out to Afghans within the country. The magazine’s staff pass out leaflets, pamphlets, brochures, while teaching fellow citizens how to access content on social media in simple-to-understand language. 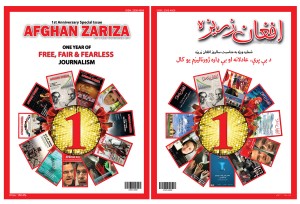 Afghanistan is a country where a transparent, free press, while guaranteed in the Constitution and by politicians, remains a dream. Zafar says that even in such an environment, he, as an editor, always emphasizes the importance of reporting the truth, ‘even at the risk of our lives.’

Maintaining transparency, fairness and openness are sacrosanct ideals for the magazine, and readers are engaged through social media to get their views on particular topics/stories. If responses are negative, the Afghan Zariza team sits down and works out where it may have gone wrong, and how to better itself. This, Zafar describes as ‘important for our reputation because we have toiled hard to carve a niche for ourselves and earn respect of our loyal readers.’

Another challenge facing any online magazine is that of knowing if feedback received is genuinely from its target audience. In an online world where fake profiles have grown alarmingly, Zafar admits one of the more important tasks of Afghan Zariza’s social media team is separating fake from genuine profiles.

Social media as a vital medium for engagement

As mentioned, Afghan Zariza realizes social media is a vital medium through which to get feedback. A dedicated web team at the magazine responds to comments in an effort to engage readers and appreciate suggestions and ideas. 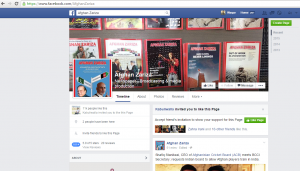 Zafar says that readers, especially through social media, often have incredible ideas or constructive criticism to offer, and that the magazine is always open to receiving them.

In a lesson that many companies have learned, Zafar says, ‘When you respond to readers on social media and push the conversation forward, they develop an intimate association with your magazine/newspaper/news channel.’

Afghan Zariza does not just simply talk of appreciating reader feedback, but acts on it. A reader once commented on the magazine’s Twitter page suggesting that the mobile version of the website be made more user-friendly. The team swung into action and made the necessary changes. Zafar personally thanked the reader for the suggestion, who went on to recommend the magazine to his circle of friends, ‘and that is how word-of-mouth promotion helped us get more followers on Twitter.’

Zafar says that Afghan Zariza, since its inception in 2013, has improved considerably, especially through engaging ever more readers inside and outside the country, mainly through social media.

While this engagement is about getting to know the audience, it is also about readers’ participation which helps the magazine’s staff understand what kind of impact their journalism is having. 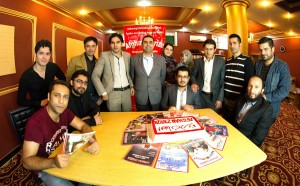 The intimate relationship the magazine has developed with readers/followers on social media has resulted in the introduction of new sections like a reader’s blog, a section on young Afghans, travelogues, and interviews with Afghans living abroad among others. Proof that engagement done right pays off, even in the toughest of conditions.