Canada is the main market for Neal Brothers and the brand is now breaking into foreign markets such as Asia, the Middle East and the United States with the brand hitting the coveted organic shelves of  Whole Foods Market in the Fall of 2015.

The food items that Peter and Chris Neal personally represent are sold through grocery retail distribution channels and are mainly comprised of Finger Snacks, Sauces, Dips and Dressings. For the purposes of this blog, I am going to focus only on the Neal Brothers brand items. Neal Brothers products are priced well amongst its’ competitors and they are within reach to customers who desire snack foods with organic ingredients. Neal Brothers was one of the first of its’ kind in Ontario entering into the marketplace in 1988 officially, and in 1990, distributing Tortillia Chips under the Neal Brothers’ name.  Chris and Peter Neal are admired entrepreneurial visionaries winning accolades from their peers for their keen insight to an organic market that we have all watch explode in the past decade. Neal Brothers has doubled their revenues every 5 years. (Ref: Toronto Star – January 14, 2014) 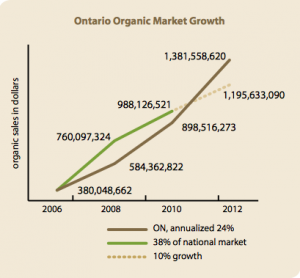 “Using Social Media in Product Development is not straight forward. There are no time-tested industry practices to turn to as a guide”

Neal Brothers Foods knows I’m writing this blog. In fact, Peter Neal kindly offered an opportunity to interview him but unfortunately the timing was just too snug before this blog on the role of Product Development on Social Media was due.  I didn’t panic – as there really isn’t anything Peter Neal needs to inform me of because admittedly, I’ve been studying Peter and Chris Neal and their company for a little over 4 years now, and I didn’t even know it.

I would define myself somewhere in between a ‘Joiner’ and a ‘Spectator’ when it comes to Neal Brothers Foods. It was Peter and his personal Facebook page that turned me from  an ‘admirer’ to a ‘cheerleader’ of the brand. In fact, please listen to what I learned from Peter Neal over those 4 years and what I believe was partially responsible for the proven success of this incredible company via SoundCloud

“When the owner shows up, it lets people know that you really care, it no longer makes you a faceless brand.”  – Peter Neal

When Ted Rubin (Forbes Top 20 Social Media Influencer) says that Social Media is a way “to digitally look your customer right in the eye”, I believe this is truly one of several Social Media strategies Neal Brothers Foods adapted early and culminated in an edge over their competitors today in their proven markets.  Social Media for Neal Brothers is a natural digital extension of Peter’s stated belief quoted above.

“Social media did not exist when we were starting our business in the late 1980’s. We know it would have been an incredibly valuable tool back then and I think it is one of the reasons we have embraced it so strongly today.  Social media gives a business the ability to curate a narrative around lifestyle, personality, brand positioning and platform. It provides the opportunity to virtually hug the consumer. That is an incredibly powerful engagement and when done well it can create loyal followers of a brand.” – Peter Neal, on the impact of Social Media on Product Development.

The Neal Brothers brand was recognizable by its’ black and white logo with packaging that was personalized only by an enticing quip about the product placed above the listing of ingredients that exuded a ‘seal’ of approval from Chris and Peter. This was ground-breaking packaging earlier in the Millennium, but by 2011, this was pretty common practice for several of the organic food products trying to enter the marketplace. It was in 2012, that a turning point shook the snow globe of their growing business and when Peter and Chris needed to take a hard look where the focus really needed to be if the company was going to succeed further. Peter talks about this turning point here.

It was time for their cultivated market to learn more about the guys who had stuck behind their products for almost 25 years. Neal Brothers Foods had shown us that they were more than chips, pretzels and salsa on social media.

Time for Traditional and Social Media to Unite!

The main difference between traditional media and social media is that the former is going to cost you $$. A public relations campaign with nothing to sell is a waste of money and time.

1) A decision had been made to bring the personalities of Chris and Peter to the forefront of the brand by using their images that highlighted their enduring legacy on their actual products. 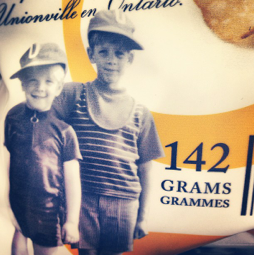 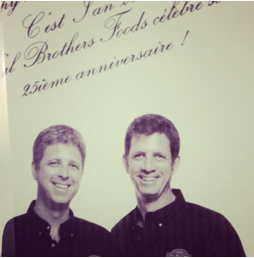 2) They also had been working to bring new products onto the market, specifically an update to their potato chips bringing new and innovative  flavours like Himalayan Pink Salt, Maple Bacon and a Curry-flavoured chip inspired by reknowned chef Vik Ramvij (Dragon’s Den) that opened up a nice channel on Social Media via one of the most popular national TV programs at the time. 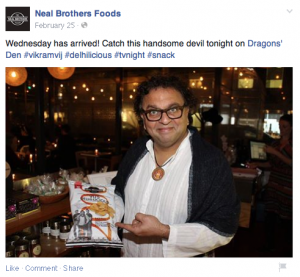 3) There was an anniversary looming to shout about as well! They could officially celebrate 25 years in business which meant Neal Brothers was officially here to stay.

These were stories traditional media could work with! Peter began a promotional tour in the regions that distributed their brands. Alongside of local TV media appearances, Neal Brothers garnered strong features in national print media including the National Post. The posts on their Social Media platforms exalted the coverage even more while we ‘fans of the brand’ all watched our local ‘brothers’ do us proud warranting a heartfelt “Congratulations!” from their followers on Facebook and Twitter…not to mention their brand new Instagram account! 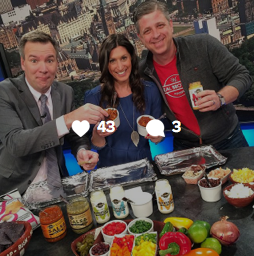 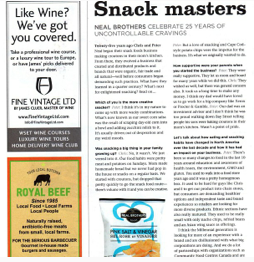 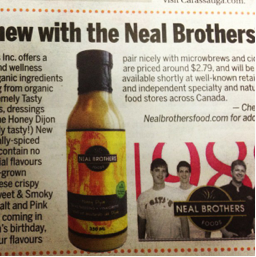 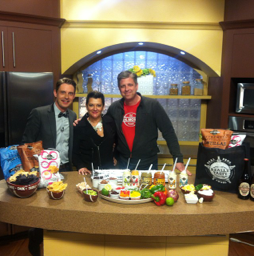 Chris and Peter both still actively monitor their personal Facebook pages and continue to make us feel included by keeping us updated so that we can continue along with them on their journey.  Their new Instagram page will exhaust you. It heralds enthusiastic employees, sponsored heart-centred events and shots of their food products with their consumers.  Peter Neal “credits Social Media with creating regular and dramatic sales spikes that occur after Community Events” (Toronto Star – January 14, 2014). They correctly recognized early that participation in community events can provide an event to get face to face with their consumer and could also provide visual content on their Social Media platforms. In the early Spring of 2015, the campaign began to wind down.  The work is by no means over but the mandate to celebrate their legacy in the business and announce their new packaging and a few new chip flavours by way of a concise campaign appeared to have been executed successfully, in my opinion.

The rewards of being right.

‘Last July, Ernst & Young contacted Peter and Chris to advise them that they had been nominated along with three other finalists for 2014 Entrepreneur of the Year (Food and Hospitality sector) for the Ontario region. Although they did not win, it was an extremely proud moment for the founders of this first-generation business and “affirmation that we were doing something right.”  (Ref: Edible Toronto/June 7, 2014)  Read the rest of Lisa Kates blog on Chris and Peter Neal’s journey here.

The Neal Brothers are constantly sharing and listening to their Partners, Lead Users and Early Adapters in both traditional Closed/Internal Collaborations (i.e. company retreats/branding companies) and in modern Public Networks like Facebook/Twitter and Instagram.  I believe their core target market (i.e. Adults buying healthy snacks!) fall into three of the five Levels of Participation that Kalypso (Peter Carr: Lecture Series/Product Development) outlines as: Joiners, Spectators and In-actives which can make it challenging for them to grow fast on Social Media.  I’d like to see more interaction with Collectors, Creators and Critics and I believe that this will happen when they launch a new product that will entice a younger consumer. (which I have been told is very close to release!)

Rules of Social Media according to Forrester

From what I have observed, Neal Brothers inherently follows what I would consider the most important rules that Forrester has set out as a guide to positively engage their social media platform as a part of their Product Development strategy via Social Media.  Specifically they:

2) Are honest about their intentions

3) Keep the dialogue going and;

4) Exhibit good execution via interplay with their existing Marketing team

I can say with confidence that when Peter and Chris Neal tell us that something tastes good on social media most of their followers on their Social Media will listen and then tell everybody they know. This must have an impact on some of the product moving off the shelves. The essence of a well-executed Social Media plan should always boil down to this: MAKE something and BE someone worth sharing.

Prepared by: Paula Sinton for Social Media for Business Performance/University of Waterloo