Increasingly, we are all watching businesses express their brands and choosing to adopt massive social media campaigns around the world as a means to connect with their customers. Strategically, using employees to ‘test drive’ future strategic mandates on Social Media platforms is an excellent way to engage an invested participant who is willing to share with their circle of influence. If you are a Fortune 500 company with several employees, a Social Media Employee Engagement program can be game-changer. Or? what about a media giant?

Let’s assume that one of the mandates of the Toronto Star is to convince the public of its’ influential purpose in order to compete with the several blogs and on-line media entities popping up everywhere, everyday. You would definitely take a hard look at the Social Media opportunities within your organization. Torstar has a built-in army of writers who can come up with a 120 character promotional tag line over their morning coffee and? a tool like Twitter to communicate that message quickly. The @TorontoStar Social Media Department can efficiently Tweet/Re-tweet a post to their thousands of engaged employees, not to mention the hundreds of local TorStar-owned Corporate Twitter accounts across the country. Narrowing it down, a small example of this could be illuminated by the question: Do you suppose that the Torstar Head Office encourages social media interaction with their country-wide freelance writing staff? Of course they do. And? The writers are happy to do it because they can align themselves with one of the largest media giants in Canada and gain exposure for future writing jobs.  We know how the big leagues work the Internet airspace and this is no secret to anyone who is on social media or in the business of promotion. After all – Rob Ford didn’t end up on Jimmy Kimmel all by himself.

..but what if you are a small business in a small town?

SEATING INC. is a small, family owned office chair manufacturing business employing no more than 25 employees in a small-town in upstate New York. They are the largest employer with the exception of the local high school. There are no media channels and no social media departments with big promotion budgets. The business has survived mostly on relationships that have been built over their 25 years in business serving a handful of states to the south, east and west of them.

“We have competitors with bigger budgets who are utilizing social media and so we have to adapt to that. We also have suppliers who need to see that we are current and customers who can use it as a way to communicate our services to their end-users”

Seating Inc. is a large beautiful vintage factory situated in one of the most scenic parts of upstate New York. Their management team consists of four members of The Hart Family – Judy and Doug Hart (the owners) and their two daughters, Emily and Kathleen, who grew up and went to school in the town they operate in. 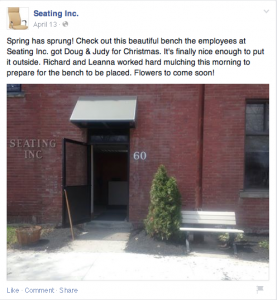 Challenges: Seating Inc. is a small operation with the majority of their employees operating as skilled workers on the production line. Most do not have a post-secondary education and are happy to adopt a ‘work to live’ attitude preferring family picnics and weekends attending their kids’ sporting events for entertainment. 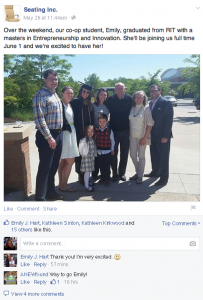 Opportunities: The whole family is part of the deeply rooted equestrian community in the area that surrounds the factory and have been charitable building good relationships with local politicians and other business owners. Emily Hart, the youngest daughter has just graduated with her MBA in Innovation and Entrepreneurship and is very familiar with Social Media. Their daughter Kathleen also grew up on Social Media as a teen and has a good understanding of the rhythm and etiquette of many of the social media platforms.

“It was then that it just made sense to create our own Seating Inc. page because if the employees liked interacting with us, maybe our suppliers and partners might like to see that we were a family owned company that really acted like one”

In late 2013, Seating Inc. decided to ramp up the social media aspect of things. They hired a business consultant who saw that they could fairly easily create potential to expand their exposure by getting a little more serious about their Facebook page.

Judy is an advocate for employee safety, especially because the work that they employ involves hard manual labor. They want to keep the skilled workers they’ve cultivated for as long as possible, with as little injury as possible. Some of the workers have worked there for as long as the company has been in business. They are the heartbeat of the organization and its’ most valuable asset.

Seating Inc. began with their immediate circle of influencers. We’ll call them channel partners. They: 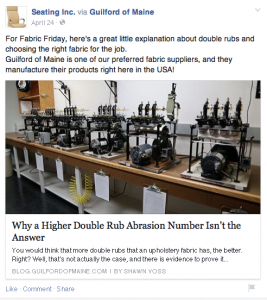 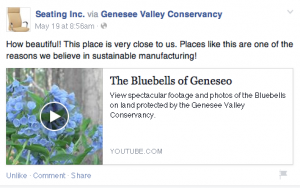 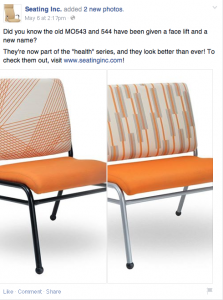 The Employee Engagement Roles for Social Media for Seating Inc.

Judy Hart: Judy is hands on with the employees and every aspect of their working day. Her role: To choose content for Facebook that is in line with her views regarding employee safety and keep them working efficiently. It also ties in nicely with the vision for their “ergonomic” product-line. 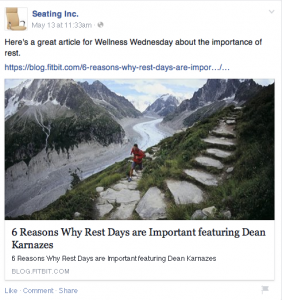 Kathleen Hart: Knows everything about the inventory – orders coming in and going out and deadlines for product shipment. Her role: To gather the samples that they are currently promoting and Facebook them. She encourages audience participation by putting relevant information for their suppliers and customers. She oversees most of the posts and responds to the comments made. She also adds an entertaining element to the Facebook page adding elements that emphasize the history of the company and their legacy within the community. 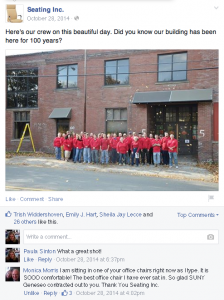 Emily Hart: Emily’s role is business development with a focus on making the company ready for the future. Her role: She researches ways to engage environmental and educational facilities so that they keep on trend, and keeps an eye on the competition and what they are doing by watching and following their social media pages. She posts relevant information on new technologies and shares the ways that they have implemented these ideas on Facebook. 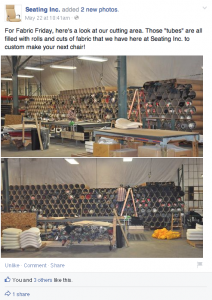 The Factory Workers: They work with their hands, meet supply demands and are SEATING INC’s most valuable asset.  Their role: They co-operate with management and allow them to take pictures of them working. 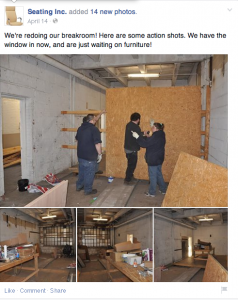 “While we can’t say specifically that our Facebook presence results in more units being shipped out the door, we can say that we have seen ROI in other ways. We received a government grant and this may have been due in part to the story that was cultivated on our timeline. We also did a radio interview with one of the larger radio stations here in Western New York and that might not have happened if we weren’t on Facebook”. 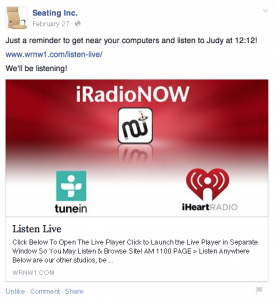 SEATING INC. will also say that they are asked for more sponsorship opportunities and the word of mouth for their product has increased, creating new customers instead of relying on the just the relationships they had. They have just started a Twitter initiative with a view to directing traffic to their nicely developed Facebook page. 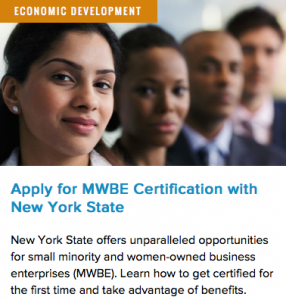 If you search “social media employee engagement” on Google or YouTube you’ll find a lot of fancy charts or strategies about how to grow big business with large administrative and marketing departments, but it’s also important to understand that the majority of the businesses do not operate this way and need to engage their staff in a way that fits.

It is with this in mind that I explain the chosen headline for this blog – ‘Take Me To Your Leader”.  At the end of the day, that’s what your social media plan needs to do – express the leadership and vision of the brand you are cheerleading in a way that is shareable.

And SEATING INC.’s leader Judy Hart? Well, you won’t see a post or a tweet from her any time soon but she is an admired leader who cares deeply for her employees and who:

2) Communicates that need to their employees

3) Includes it wholeheartedly as part of the strategy

4) Has a business story to tell and;

5) Employees who want to share it and play along.

Wouldn’t you want to share The Hart Family’s vision if you were an employee or a customer?

Prepared by: Paula Sinton for The Social Media Business Performance May 28th, 2015