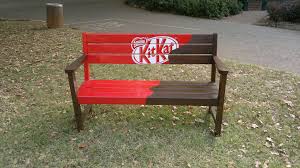 The Bench as Traditional Advertising

The KitKat bench is a great piece of creative advertising. It seems to appear on every list of the best bench ads. In this video listing 25 Incredibly Creative Bench Ads, it falls at #3, bested only by a moving Melbourne Citymission bench on child homelessness and a ingenius Nike RUN bench.

Judged according to traditional marketing metrics, it scores well. The message is great: “Have a Break, Have a KitKat” (Get the play on words? Because it’s a break-able bar…); it’s visually appealing; relays benefit (please sit on me and relax); and is reflective of the brand’s character.

Even the shape of it reflects the product—the bench is shaped similar to a KitKat bar and is slotted and brown, just like a KitKat. There are a few different versions and the bench was used in print ads too. 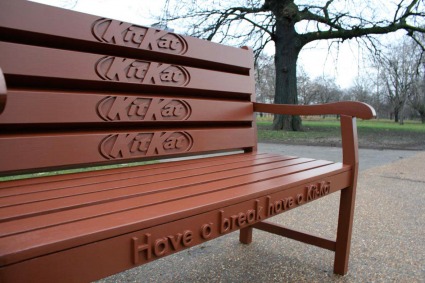 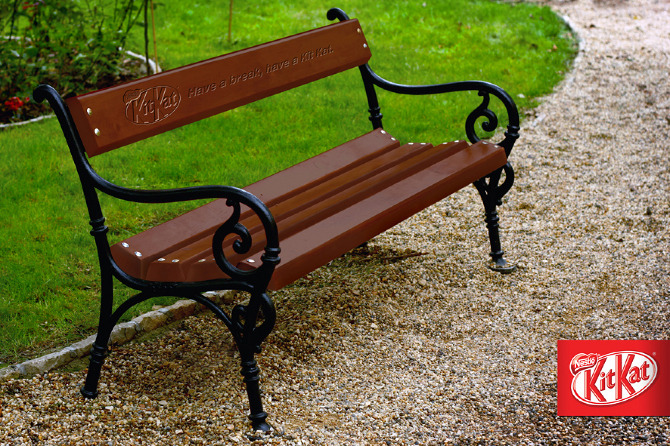 Then, of course, you have the imitators… 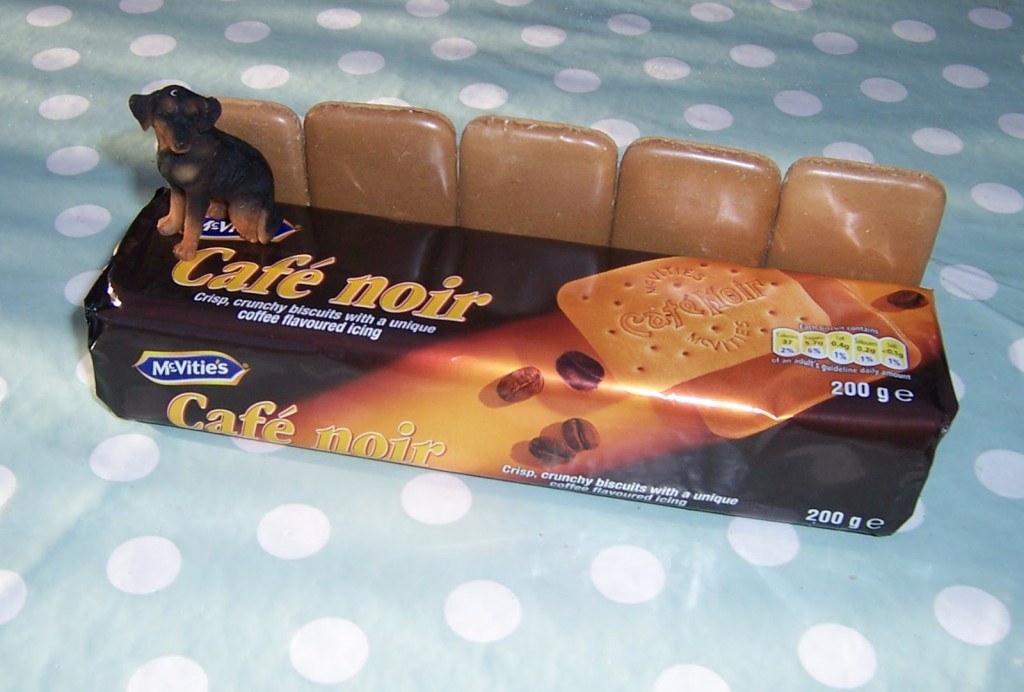 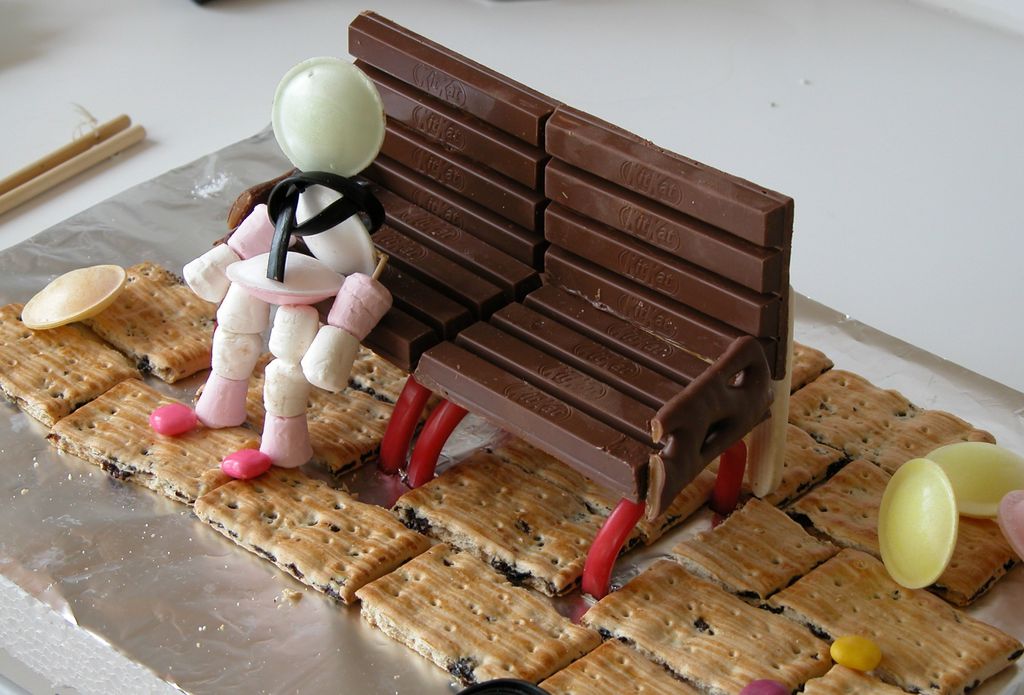 The bench is a creation of J. Walter Thompson, an ad agency founded in 1864 that has more than 200 offices in over 90 countries. JWT is one of the most influential agencies in the world and has a rich history of firsts—the first full-service ad agency, pioneers in ad careers for women, the first to produce sponsored TV programming, and to pioneer end-dish marketing (promoting the dish the product ends up in). I mean, these guys are credited with–if not actually inventing the grilled cheese sandwich–at least making it synonymous with the Kraft brand. 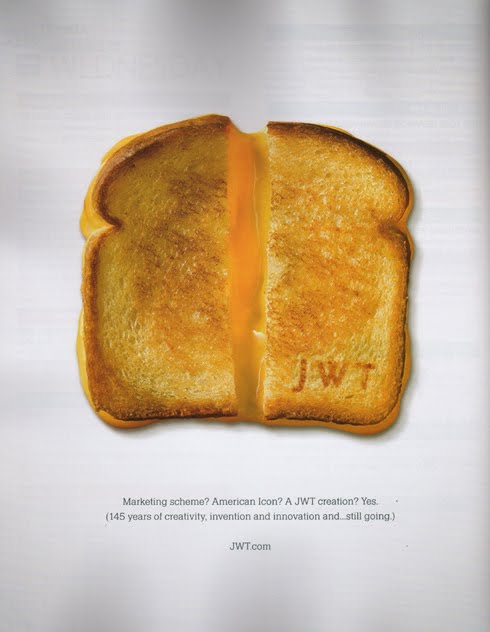 The bench is simple and memorable, cost effective and impactful. If I saw one of these benches, I’d probably go buy a KitKat bar almost immediately. But how many benches were made and what are the chances of my actually stumbling across one in person? And how about the billions of other people in the world who might enjoy this creative bit of advertising?

The KitKat bench campaign has transcended traditional marketing. It works well in person (if the benches are even in still in existence), but it has also gone viral on social media, giving it a timelessness and spread that is truly impressive, not to mention wonderfully cost effective for the organization.

I saw a picture of the KitKat bench this morning on my LinkedIn feed. At the time of this writing it had 75 likes and more than a dozen appreciative comments:

“Doesn’t work with Oh Henry though…”

The bench campaign began in December 2008! What’s it doing on my daily LinkedIn feed more than 7 years later? And it’s all over Twitter too…and flickr, Instagram, Pinterest, Google +, Facebook, etc. My review of several social media sites reveals that this ad is still being continually posted, shared, and appreciated.

The dream that is going viral

Viral marketing is a business strategy that uses existing social networks to promote a product. Its name refers to how consumers spread information about a product with other people in their social networks, much in the same way that a virus spreads from one person to another. While social networks are obviously not the only way to spread a viral campaign, they certainly are a popular option.

Andreas M. Kaplan and Michael Haenlein put it well in their 2011 article in the journal Business Horizons entitled “Two hearts in three-quarter time: How to waltz the social media/viral marketing dance:”

…according to the U.S Center for Disease Control and Prevention (2010), approximately 60 million Americans contracted the H1N1 virus between April 2009 and April 2010—more than 150,000 per day! Although only 265,000 were actually hospitalized and 12,000 perished, many of us won’t soon forget the panic surrounding this ‘swine flu.’ Now, consider an epidemic of another sort. On July 14, 2010, Procter & Gamble uploaded a 30-second video spot via the social media application YouTube, to promote its Old Spice brand. This video, entitled The Man Your Man Could Smell Like, was viewed 23 million times in 36 hours—representing 15 million ‘infections’ per day. If H1N1 had spread with the same rapidity, 60 million infections would have been reached after less than a week, and the 35 million casualties of the Black Death would have taken no more time than a long weekend.

While many think of viral marketing as referring mostly to videos that get passed and played by tens of thousands of people, viral advertising doesn’t always have to be a video commercial–as shown on this Pinterest page (notice the top middle picture!). In fact viral marketing spans many mediums and platforms, offline and on, from print to screen.

The big question is how to get your campaign to go viral? Lots of sources offer hints, techniques, advice: get it seen and passed on by influential people, make it an easily share-able media, unique, visually appealing, engaging, etc. There’s even a WikiHow on it.

But beyond all the advice, it’s hard to ignore that luck plays a big role in whether an marketing play goes viral or not. Kaplan and Haenlein acknowledge this importance of luck, as do many others. 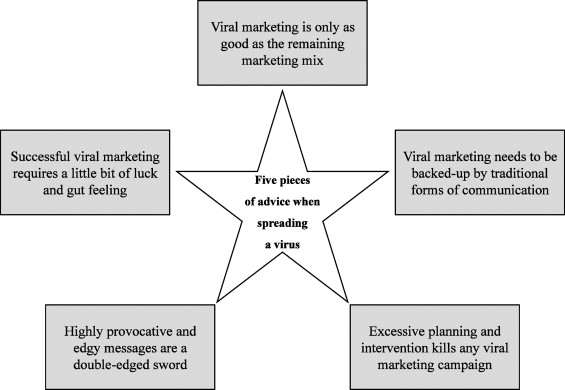 Was the KitKat bench meant to be as enduring and viral as it’s become? Hard to know, but my guess is that marketers usually hope their campaigns will be iconic, timeless, viral, even if very few actually are.

Wonderfully creative, visually appealing, share-able marketing that has a memorable message always has the potential to become viral. Keep this in mind when designing a campaign and make the right efforts to help promote it’s ability to be spread widely and over time. You never know.

To contact the author of this entry please email: debrabeck@decamedicalwriting.com