The Internet has come a long way since it’s inception, evolving to suit human needs and transforming to become more accessible to people around the world. The Internet has changed the way people communicate, network, share opinions, do business, shop, get jobs, bank, make donations, and learn, and is continuing to shape the world in countless other ways. The Internet is making its way into people’s lives and “has provided us with infinite ways to do something very human, and that’s connect”.

websites and applications that enable users to create and share content or to participate in social networking.

It is a technology that is reshaping our world, and the way many experts see it, Social Media is here to stay. Likely it will continue to evolve to a point where the Social Media of the future no longer looks like it does today or is even still called Social Media but it will still at it’s fundamental level be a way for people to connect and shape the world. Social Media is an incredible tool that has become very relevant in the development of the world and the fight for social and political changes. 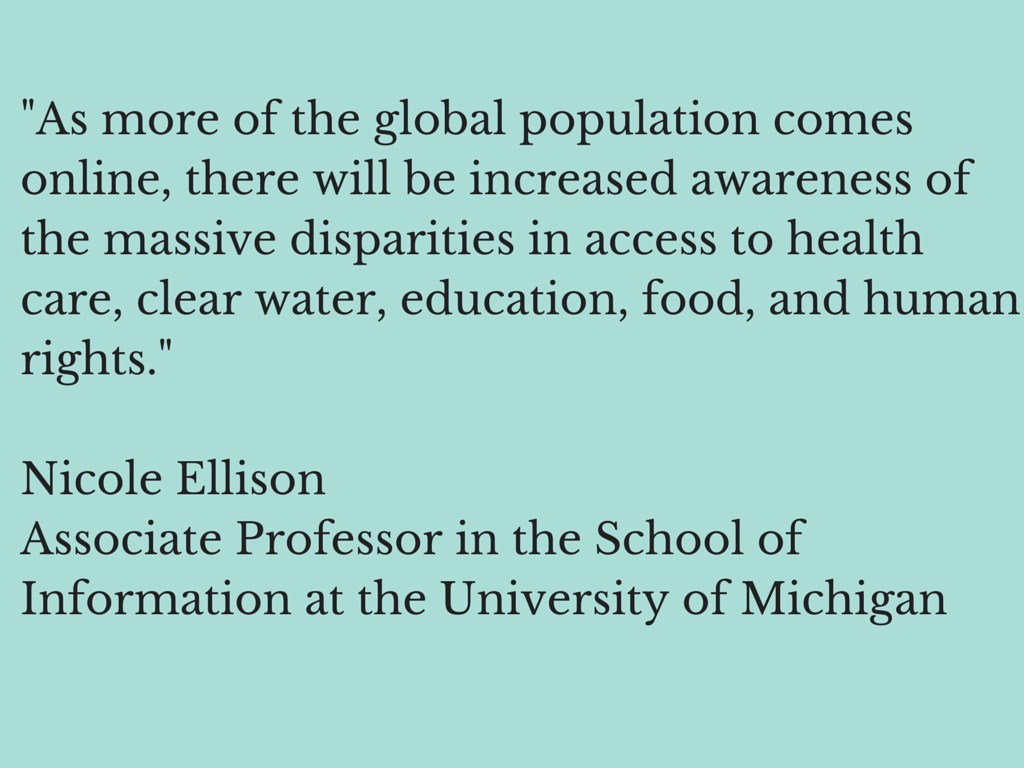 Social Media has changed the way we communicate between our friends, family, businesses, coworkers and even others around the world. Social Media is lending itself to being more than just a place to share videos of cats and keep in touch with family far away. It is evolving into a tool to be used to change the world politically and socially. Studies show that “citizens who have access to the Internet and Social Media platforms are more aware of their social, political and economic environment than those citizens who lack access.” 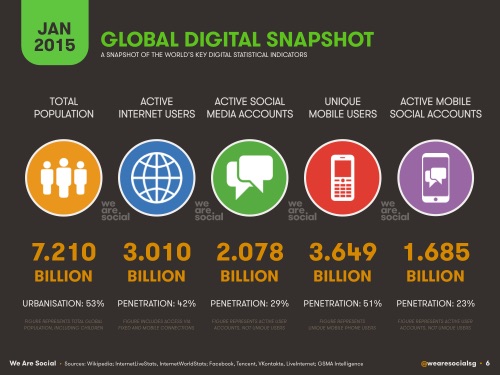 As of January 2015 We Are Social gives us a snapshot of what the online (or Internet and Social Media) community looks like globally.

Currently Social Media has just started being utilized for global change. As technology changes and becomes more accessible on a global scale we will start to see even more action through Social Networks that will demand change from people globally rather than just locally. It will be a lot harder to ignore problems that are happening around the world when everyone is so easily connected. The future will see people having more of an input because governments and officials won’t be able to ignore a global community demanding change without severe repercussions.

There are so many examples of how we are beginning to use Social Media for Social and Political Change and likely we are going to see the numbers and events just explode and grow with the ever expanding online community. See the following examples of where Social Media will be growing from and imagine the good that can be done in the world with the creation of an all encompassing online global community.

In 2013 Change.org petitioned to have all pictures, groups and videos that advocated sexual violence and sexism deleted off of Facebook. They raised awareness about the petition across Facebook as well as Twitter with the hashtag #FBrape. Ultimately their gathering of signatures and the way they were able to spread their message across social media resulted in Facebook deleting of many of the pages.

In 2014 #WhyIStayed & #WhyILeft  on Twitter united survivors of domestic violence. It brought to light the global problem and created a space and community of support.

Also in 2014 we saw #ICantBreathe unite the movement to end police brutality. The hashtag came out of the encounter that Eric Gamer, an unarmed black man, had with a white police office who placed Eric in a fatal chokehold.

The latter two haven’t necessarily seen direct action taken as a result of their viral conversations but the awareness and conversation is a lot further than it previously could have and would have gone. These are the beginnings of social change, creating awareness so that change can be made and action can be taken because it is demanded by the population.

“Power is no longer absolute, but must be grounded in shared principles. If the social contract is breached, there will be a heavy price to pay and social media will play a major part in exacting that price.”

The 2011 Egyptian uprising motivated tens of thousands of protestors (through social media) for 18 days of demonstrations and, ultimately led to the resignation of Egyptian President Mubarek on February 11 2011.

Obama’s 2008 Presidential Campaign took to Social Media networks to engage and bring out the young vote. At the time 83% of 18-24 year olds in the United States had social networking accounts and 2/3 of them used the sites for political activity. It was a new strategy and by immersing themselves in the social networks, the Obama campaign managed to connect with this demographic on what was important to them and see how their wants/needs aligned. See some discussion around the follow up to that campaign with the reelection campaign in 2012.

“In the past, media provided a filter. If something was on the front page or the evening news, it was considered important. If not, it wasn’t. Yet today, anyone can broadcast – whether it be a distraught mother or a crusading journalist. Nobody needs to ask for permission, even in a corrupt, authoritarian country.”

With Social Media anyone can broadcast the news as it is happening around them. It means that protestors can be posting videos and statements from the front lines – recording actions that journalists might not hear or be able to see because they are minutes or hours away from being in the action themselves. It allows everyone (with access to the Internet) a voice to share injustices and events as they unfold and have the world around them come together and offer support.

There also has to be recognition that there are problems with these technologies. Social Media also lends itself to cyber bullying, cyber crime, sharing of untrue facts and much more. People want to condemn it for it’s problems but we have to look at Social Media with a bit of optimism. It is still not very old and the technology is ever changing, everything has it’s faults but maybe with the evolution of the technology there will be a way to combat and resolve these problems.

So what does this all mean for the future? 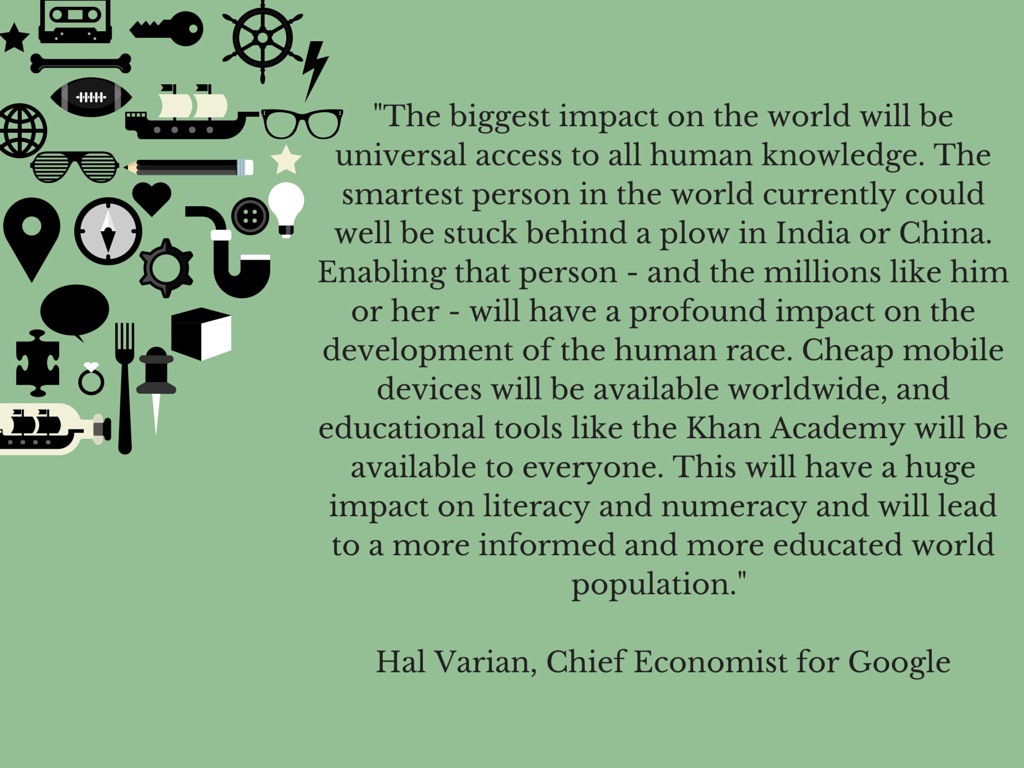 We are only in the early stages of seeing the effect social media will have on the world. We can’t accurately foresee how the world will change, how technology will grow, or anticipate how long changes will take. But we can see that no matter which direction the future takes it will still come from a place of basic human nature; communication. Communication is key to development and is the basis of Social Media, which is why it has been adopted so readily. Social Media began as a basic conversation between friends and will continue to evolve into a global discussion due to our desire to share and interact with others.

We will see technology develop to become more affordable and advanced so as to be accessible worldwide. This will bring the Internet and Social Media to the global community creating the ultimate global conversation.  Social Media’s role will change to become a platform where the global community can discuss issues and policies and from this create actions for the betterment of people. We will see more integration between citizens and governments with the voice of the people enacting change in policy at a rate unparalleled, being able to resonate with billions. Social justice issues will no longer be segregated to communities or countries but seen as global issues and Social Networks will be in place to support these conversations and the actions that need to take place.