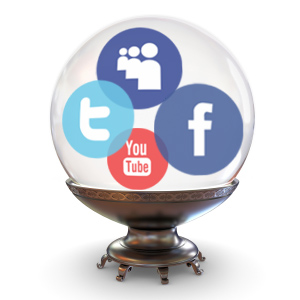 The future of social media -for the next 15 minutes!

There is no data on the future, only predictions, estimates and best guesses. We will benefit from remembering how the Danish philosopher Søren Kierkegaard saw it, “Life can only be understood backwards; but it must be lived forwards.” With this, we can assume not even the pundits can predict what lies ahead when it comes to Social Media.  Not long ago, a popular forecast was an imminent death of Facebook due to the declining interest of young people. Wrong. The company increased their number of users steadily with the addition of diverse age groups and business applications and earned $2.96 billion in ad revenue in the third quarter of 2013, up 64 percent from just the year before, as stated by Hootsuite’s CEO Ryan Holmes.

Eleanor Ross projects Ello as the next Facebook. This site is currently in beta phase but it’s already had so many requests to join that it has had to close their operating “invite system”. The hype around Ello is #FOMO (Fear of Missing Out), and that’s probably one of the reasons why it gets so many joining requests.

Social media addiction & the meaning of the word “Friend”.

It has become an acceptable social norm for people to be glued to their devices texting away non-stop and apparently missing the outside world, or as many social media foes would say, “not being present in the moment”.  There is even a new widespread demand of chiropractors to treat Text Neck, the new epidemic of excessive “connecting”.  Yet, social networking already accounts for 28 percent of all media time spent online, and users aged between 15 and 19 spend at least 3 hours per day on average using platforms such as Facebook, Twitter and Instagram. Businesses of course profit from these staggering behaviour numbers reaping the rewards of marketing campaigns aimed at increasing consumerism as seen in AdWeek’s Infographic

A lot has been written recently about the devaluation of the word friend and Conversations about Conversations.  We gather snippets of information and we quote other people’s work to collect more likes, clicks and friends.  And it can become very addictive. But it’s undeniable we are in the midst of a social and technological revolution. And if we are to learn from other, more violent and destructive revolutions through history, the outcome, potential benefits or undeniable faults are impossible to know.

What we  know for sure today is  that with one platform or the other, social media is here to stay. Viewed from the lessons of the last 10 years, it is predicted to grow, continue to change social dynamics, disrupt business processes, drive us mad with frivolous conversations and fill us with instant wonder at the same time.

At least we know that is the future… for the next 15 minutes. After that… who knows?

If you have concerns as to the accuracy of anything posted on this site, please send your comments to Peter Carr, Program Director, Social Media for Business Performance pdcarr@uwaterloo.ca