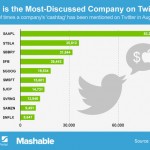 Description of how social media is used in stock analysis

Social media stocks are outperforming the wider markets; no surprise. Also not surprising is that a social media Exchange Traded Fund (ETF) has been developed to provide would-be investors with a convenient way of tracking the upward trajectory of social media.

There are myriad ways to analyze stock markets. Values, growth, momentum, etc. They can be split into two basic types of market analysis: fundamental analysis and technical analysis. But there is also sentiment analysis, which attempts to measure investor attitude and its interaction with the markets. But it’s not what you think: sentiment analysis actually starts with the assumption that the majority of investors are wrong. These guys are contrarians and they look to move in the opposite direction from the majority of market watchers.

It seems there is a new kind of sentimental analysis trending: using the vast space that is social media to provide predictive trends in the market and in specific stocks.

According to Adobe (and as of the beginning of 2014), there are 12 social media platforms that each boast more than 100 millions users. (see infographic below)

This data needs updating, since, as a previous post of mine discussed, Instagram now has more than 300 million regular users, and Twitter, 288 million, but you get the point.

These numbers give a whole new meaning to talking up a stock pick to entice others to buy, but what it also does is provide a new metric for judging a company’s performance.

Are they reaching their target audiences where they live? Are they able to generate buzz? Do they engage their customers, crowdsource product development, keep employees happy? How are they managing their brand? What are people, specifically “experts” Tweeting about them?

Financial discussion on social media, platform creation and user adoption has deepened in the last few years. Ever heard of cashtags? Twitter unveiled cashtags in July 2012. They are stock ticker symbols that are prefixed with a dollar sign and they’re commonly used on Twitter to associated content with tradable equities.

Three guesses which is Twitter’s most popular cashtag. 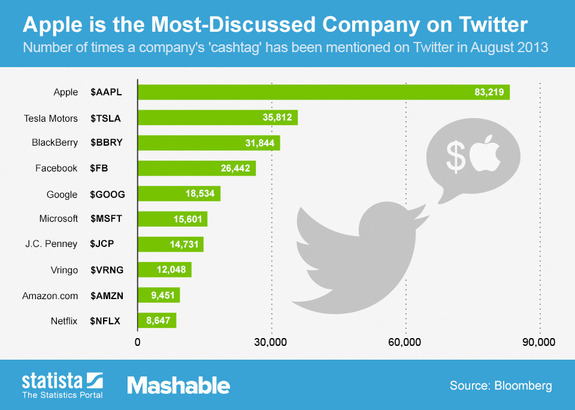 What if you bought the stocks that were most often mentioned with cashtags? Interesting idea. In fact, a peer-reviewed study by 2 Microsoft software development engineers concluded:

“Cashtags, in particular in combination with other cashtags or hashtags, can be very useful for analyzing financial information and provide new insights into stocks and companies.” (Hentschel M, Alonso O. Follow the money” A study of cashtags on Twitter. First Monday 2014; 19.)

Take a look at this graph from the Hentschel paper. The figures show overlays in tweet volume (number of tweets per day) with market performance (closing price per day in US dollars) for 4 stocks: 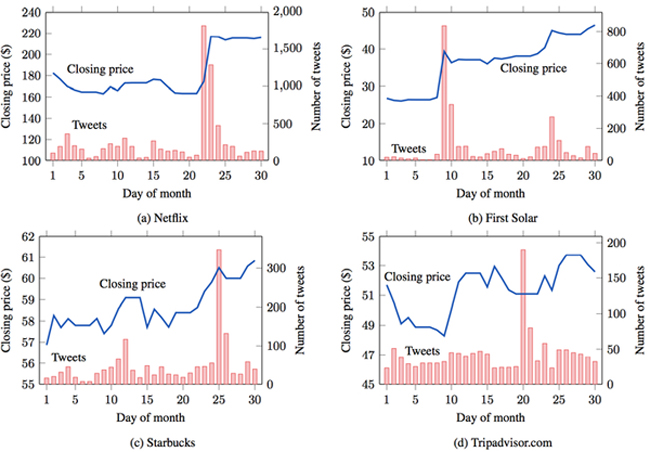 The study authors concluded that these examples “suggest that there is a correlation between tweet volume and stock market performance, but not always.” As always in the social media world, more data is needed to draw firmer conclusions.

Cashtags are just one example of many ways in which the financial markets and the social media world is colliding. In the 2014 Whitepaper written by the folks at GNIP, several others examples are given. GNIP is one of the world’s largest providers of social data; they were acquired by Twitter in April 2014.

As always, the devil is in the details, and as with marketing, branding, and engagement efforts, it’s hard to filter the noise and measure true impact.

What is the future of social media?

It’s here to stay, that’s for sure. Everyone’s using it. 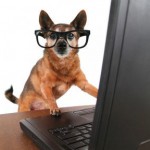 Its impact will only continue to grow, particularly as people find better ways of measuring said impact. Could you one day soon develop a successful stock picking technique based entirely on how company’s are engaging with social media? I’m sure it can be done, and probably is being done already, but I would suggest it might be safer to use social media as just one metric to consider when assessing a company’s stock.

I leave you with a few words on the subject by Bill Gunderson, President of Gunderson Capital and an active Tweeter (>20,000 Tweets and >5000 followers). Yes, he goes off a bit about lobster fishing, but I do think he hits on what will be a big part of the future of social media as it pertains to business.

Picking stocks is all about having the right information. Try seeing how that company is doing on social media.