I had the privilege of attending the Social Innovation Bootcamp presented by Queen’s University Centre for Social Impact in Kingston this past weekend.  Basically a 24 hour marathon event that featured speakers addressing some of the major aspects of Social Innovation, the bootcamp culminated with a pitch competition that saw participant teams putting it on the line with their ideas for combining socially beneficial goals within a sustainable business model.  Social Innovation is a new, complex and politically sexy domain of thought that incorporates elements such as sustainability, social justice, impact investing, social entrepreneurship, social innovation, social enterprise, legal frameworks, really a whole alternate universe of thinking and doing.  As I sat through the session your humble blogger was of course thinking of the implications on and around Social Media and not surprisingly there were many to be found, not the least of which that Social Innovation would  likely not exist in anything like its current form if not for the emergence of Social Media.  I also formed the opinion that the two will advance together and their paths will cross many times, their futures thereby intertwined.

It is no coincidence that Social Innovation and Social Media share a key word in common.  Put the word ‘social’ in front of other big concept words and stand back to watch the excitement as a debate is likely to follow (think of social engineering, social contract, social security, social welfare state).  Fortunately the whole situation can be viewed with the aid of some devices that act as helpful lenses as we try to look to the future.

The first device we will exploit is the concept of diffusion of innovation.  In this context it is important to distinguish between technology and innovation as we step forward.  Before the explosion of digital technologies the world was a simpler place and new technologies were seen to succeed or fail based on a relatively straightforward theory of adoption.  In general new products, whether TVs, jeans, shampoos or cars, were marketed to segments based on adoption patterns, and like a set of dominos earlier adopters would influence the next set of consumers in an orderly and predictable fashion.

Another related framework that also added clarity back in the day was the product life cycle, which can be conveniently superimposed over the diffusion curve to form a simple, elegant framework first described by Everett Rogers.. 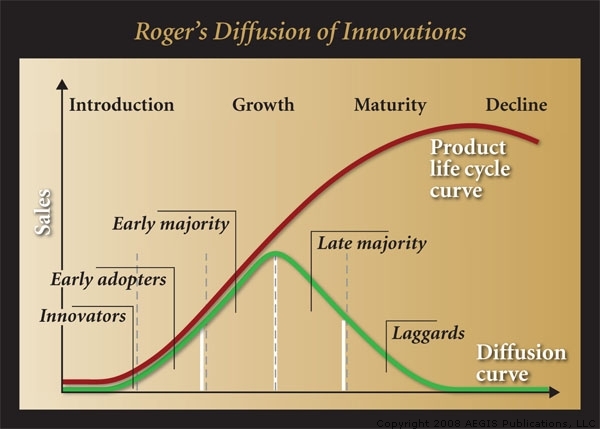 I grew up with these models and can say they served me well.  No doubt the version of reality they attempt to represent survives, but do they ever feel inadequate to describing the emerging world that we face today, so well represented by the paradigms that define SI and SM.

The diffusion of innovation is a decidedly different phenomenon from getting people to buy the latest and greatest shampoo.  For simplicity’s sake I will define innovation as a transformation or change of primary behaviours and resource flows.  Also, while normally seen as a positive and desirable outcome, innovation often carries a dark side.  As an example that demonstrates these points I would offer iTunes .  As an innovation it has played the central role in changing how people engage with and consume music, and the shear numbers would lead one to believe that iTunes is great stuff.   There is always more to the story so let us not overlook how it impacts the music industry.  Were artists and music companies making too much money before?  Who are the winners and losers?  Is music as an art form better off?  Important questions and I think the answers are not nearly settled.

This all leads to the obvious conclusion that understanding new realities requires different tools and frameworks.  I introduced the Gartner Hype Curve in a previous post.  It is an example of a more recent model that provides alternative and additional perspectives helpful for understanding complex innovations such as social media, and how they may evolve into the future. 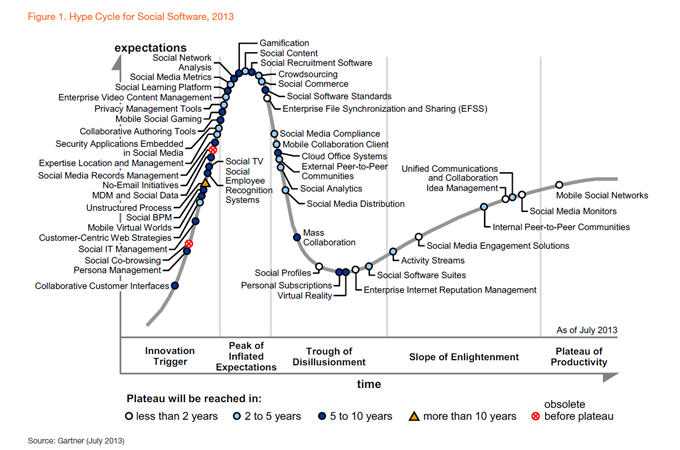 Obviously I am a fan but I think a fair criticism of Gartner’s curve is the relative focus on technology, and the lack of evident ‘social science’ in the framework.  While the flow of new technologies will continue unabated for the foreseeable future, Gartner or someone clever might consider unpacking the time axis and expanding on what expectations, disillusionment and enlightenment are describing.  I think many interesting insights can be gained in this area.  Sooner than later I expect to see a curve describing Social Innovation and the various related element as there is no immunity from the telltale signs of hype.

Another device or way of thinking that can help focus our view on what might lie in the future of Social Media and Social Innovation are the various models that deal with how complex systems adapt to change.  Jerry Kane from Boston College has focused on researching the connections and common themes linking the drivers of Social Innovation and how they can be used to better understand Social Media.  As might be expected his work is academic and precise, but the implications are worth pondering.  The following video provides as much as you might care to take in one sitting (about 30 minutes) but I recommend you try.

For those not feeling so brave I will highlight some key takeaways in the items below that can be useful for imagining the future.

The Behavior of Natural Systems

A foundational concept in Social Innovation is the notion of natural processes, in other words what Nature dictates to happen. Every ecosystem (whether traditionally thought of as natural or man-made) can be reasonably expected to experience transformations that follow a familiar pattern of events.  As an example, over a long enough time span, say 100 years, we know that a forest will experience processes of renewal, growth and devastation,  followed again by renewal, the so-called complex adaptive cycle.  How these processes manifest will depend on things like climate patterns, neighboring forests, animal life, and when and where lightening happens to strike.  But the point is the patterns are distinctive and apply broadly.  The similarities far outweigh the differences.

If you buy into the idea of man-made ecosystems, think of the smartphone market. The story starts in the mid 1990s with RIM dominating a distinctive market space for 8 or 10 years.  Most people have concluded that RIM got fat and happy over these good times and was beginning to act like a sick organization.  Then lightening struck and the iPhone landed followed by Android and a bushel full of competing products.  RIM burned.  Today Apple and Samsung are like what RIM was.  Notwithstanding ups and downs and as competitors struggle to survive, they control the market making tons of money in the process.  The complex adaptive cycle poses a number of key questions – How many phone options does the market need?  One or two, or many?  What market niches are under-served?  What new products are coming into the market and why are they succeeding?  Are the incumbents staying fit through renewal?  Are they too big to renew effectively?  Can the incumbents continue to grow for the foreseeable future?

Tomorrow… will it come?

The future of Social Media is destined to include various technological steps and leaps.  No doubt the next version of FaceBook will be neater than what we have today.  Money will be won and lost; the world may be better or worse off.  Imagine yourself as an investor with 2 options.  Place your money into a diversified set of technologies and hope to make your money back and then a bit.  Or take a gamble on one or two key technologies that might ‘hit it out of the park’, but then again… in the end who knows?  But that it is worth investing there is little doubt.  I would add a third option though that is emerging and enabled by Social Media.  The implications of Social Innovation dwarf the predictions and rhetoric surrounding Social Media.  As it moves through he hype curve Social Innovation stands to define more than how Social Media might evolve.

Back to the Future

When I fall into the trap of trying to predict the future I have learned to do one thing, look directly at the past.  So from 1999 I offer you a view of the future.

To contact the author of this entry, please email at:  gtmatulis@gmail.com