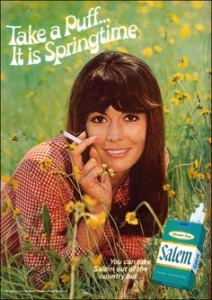 Smoking. Eww.
I was born in the late 80s. I grew up in a household where both my mother and father smoked. Not only did they smoke, they smoked indoors. It was their house, their rules as they would say. All of their friends smoked. Everywhere you looked, people smoked. Smoking was seen as glamorous. Celebrities constantly lit up smokes in movies and on television. Advertisements littered magazines, billboards, and newspapers. Sponsorship dollars from the tobacco industry fuelled major sports especially racing. Even with the odds against me, did I take up smoking? No.

Flash forward to today. I still don’t smoke (and never will). None of my close friends smoke. When I count the number of people I know who smoke, I can do so on one hand. So, what led to this switch? Surprise – smoking kills. It’s the number one preventable cause of death. As the studies rolled in and deaths associated with smoking increased, the number of people who smoke declined. Perceptions changed. 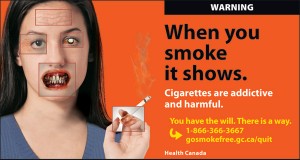 Advertisements for cigarette have stopped, no one smokes in movies, and sponsorship from tobacco companies have ended. The Tobacco Act, introduced in 2003, made it virtually impossible for cigarette manufactures to promote their products. In Ontario, this has been taken even further with Smoke Free Ontario/Tobacco Control Act preventing all advertising at the point of sale and require anti-smoking graphics on all cigarette packages. 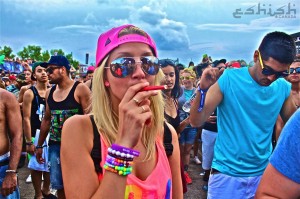 Enter e-cigarettes
When one industry dies, especially with a cult following like smoking, another industry is waiting on the sidelines to take it’s place. Welcome e-cigarettes! An e-cigarette is a battery-powered vaporizer which creates an aerosol smoke. E-cigarettes do not contain tobacco although many do use nicotine from tobacco plants.

E-cigarettes have grown from an unknown product to a booming industry across North America. In the U.S., sales have increased by over 2,000% in only 4 years (2010-2014) to over $1.7 billion annually. 15% of all Canadian and 20% of Canadian youth have tired or are actively using e-cigarettes. This contrasts traditional tobacco smoking which stands at just 16% to demonstrate how popular e-cigarettes have become. How has this happened? E-cigarettes do have to follow a number of the legislative bans for advertising but not all of them. Most notably age restrictions on product use.

“Many people believe social is for anything and anyone, but when you’re working with brands that are restricted in their advertising, sometimes even having a social presence is difficult. Brands like tobacco, alcohol and pharmaceuticals are some of the biggest advertisers out there, but are very restricted not only federally, but sometimes even regionally about how they can interact with audiences online.” – Lucy Leiderman – Director of Digital Strategy at PILOT PMR

In Ontario, the government has moved to ban teenagers from purchasing e-cigarettes. Under the proposed law, consumption of e-cigarettes would be banned for anyone under 19 as of January 1, 2016. Their use would be restricted to the same places a regular cigarettes.

eShish Canada
eShish Canada launched in 2012 when they saw a gap in the e-cigarette market. The company had previously been operating in the UK and were looking to enter the Canadian market. As e-cigarettes became more popular in Canada, they saw a gap and introduced their line of luxury e-cigarettes that were more stylish to cater to the younger market. Their products became an immediate success. eShish products are currently sold in Toronto’s top nightlife venues, hotels, boutiques, and upmarket independent stores throughout Ontario.

Although, I do not support smoking (in any form), I feel that eShish has done an excellent job using social media in a unique way to market their product in a restricted market. I first learned about this product when I met with PILOT PMR last week – Toronto-based public relations, branding, and digital strategy agency.

Social proof
PILOT PMR worked with eShish to craft a campaign centered on social proof. To combat negative associations with traditional smoking, they created a social campaign that leveraged the social features of shish culture and the social experience that comes with it. Over a two week period the product was introduced at numerous luxury venues, parties, and invitation-only events including TIFF.

“For eShish, we were faced with an e-tobacco product that had to adhere to Canadian regulations, meaning that it could not have any tobacco or nicotine in it. Still, no social media would let us advertise and negative media was piling up. We had trouble imagining how to create a positive brand presence without social exposure or a website. We decided to let users of the product become our brand ambassadors and create content by pulling the API of other peoples’ and brands’ social profiles that mentioned our product and collating it into a visual site that would let users make the statement for the company.” – Lucy Leiderman – Director of Digital Strategy at PILOT PMR

eShish Canada created several social media channels and developed a non-traditional web presence to share their social proof. Using API technologies of several social media outlets, a website was built as a tiled “social proof wall”. As new content became available, the wall was updated, reflecting the real-time social experience of eShish users. Contests were also used to spur social activity between events, and users were encouraged to find themselves and their friends online. Today, eShish was a strong social media following on their Facebook, Twitter and Instagram pages.

Lessons for others
eShish had the right combination of timing, product appeal, and market to make their product incredibly successful in the Ontario market. Although they had to overcome a number of barriers to entry that resulted in them taking on this social strategy, I think most businesses can learn from their use of social media marketing.

Think outside of the box
eShish faced huge barriers in successfully launching their product – many organizations might have looked at this and decided not to launch. Instead, eShish partnered with a local agency that had a deep understanding of the Toronto market. Together they created an innovative plan for social promotion that complied with legislation while allowing them to launch their product.

Find the right target audience
I think that the success of eShish can be attributed to their strong understanding of the market. They provided a product that filled a gap, tailored that product to their needs, and did an exceptional job of positioning the social aspects of the product. 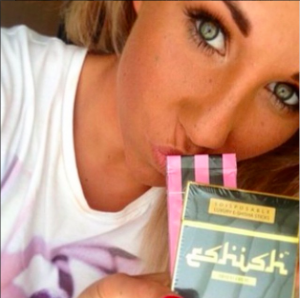 Let your customers sell your product for you
Using social media and social proof to market eShish was incredibly innovative. Their target audience is immersed in social media and highly active on all platforms. By simply providing them with the product – their users sold it to their friends by sharing it across their platforms as brand ambassadors. By taking a photo of themselves using the product and sharing it on Instagram, hundreds of people were now exposed to the product. Every nightclub in Toronto has a club photographer who posts photos online the next day – if everyone in those photos has an eShish stick, people are going to start talking.

To contact the author of this entry please email: aliciambedard@gmail.com

If you have concerns as to the accuracy of anything posted on this site, please send your concern to Peter Carr, Programme Director, Social Media for Business Performance.