There’s little doubt that there’s a ‘cool factor’ to being a photojournalist.

Movies such as The Bang Bang Club and Under Fire have dramatized the lives of conflict-seeking photographers. Clint Eastwood portrayed a fictitious hunka-hunka National Geographic photographer in The Bridges of Madison County. And of course there’s “Animal” — the unshaven shooter in the hit TV series Lou Grant.

The public’s curiosity about photojournalism is palpable: Whenever a news photographer is on assignment in the street, there’s often a camera buff nearby asking what gear the photographer is using, what lighting he or she is using, or what’s their favourite lens.

Yet Taras Slawnych, visuals editor at the Toronto Star, Canada’s largest-circulation daily newspaper, argues that few people really understand what goes on in the daily working life of a news photographer.

So in an effort to pull back the veil on how Toronto Star photographers ply their trade the photo department has, over the past two years, produced about 60 short episodes. They provide practical tips to curious shutterbugs and shed light on the working life of daily newspaper photographers.

The first series, which ran weekly until the summer of 2014, was called Master Glass. It featured Star photographers giving video tutorials in controlled settings (not on location).

The series that’s currently being produced, called On Assignment, takes a different approach: photographers explain their work while in the field.

But social media also played a part in shaping the product.

For more than a century the Toronto Star has provided a valuable service to society. Without dwelling on the news media’s role as public advocate and watchdog, The Star supplies its readers with information, and provides readers and advertisers with advertising.

The Star’s main products are stories and images that appear in the newspaper’s print edition and on its website.

Original content — including Master Glass and On Assignment — boosts the strength of the online product.

In a brief interview Slawnych said Master Glass and On Assignment were prompted by camera manufacturer Canon when The Star’s photo department switched to uniformly using Canon gear a couple of years ago.

According to Slawnych, Canon representatives wanted a non-traditional advertising vehicle.

The result was Master Glass, a series of more than 50 video tutorials in which Star photographers gave tips on how to photograph fireworks and frenzied city hall scrums; how to shoot video and recover image files; and, as the saying goes, much much more.

Typically, each video was viewed about 400 times on YouTube and many more times on The Star’s website, Slawnych said.

But the tongue-and-cheek finale — in which Randy Risling coached shutterbugs on how to kibosh a wedding by being as intrusive as possible — racked up more than 100,000 views on YouTube alone. 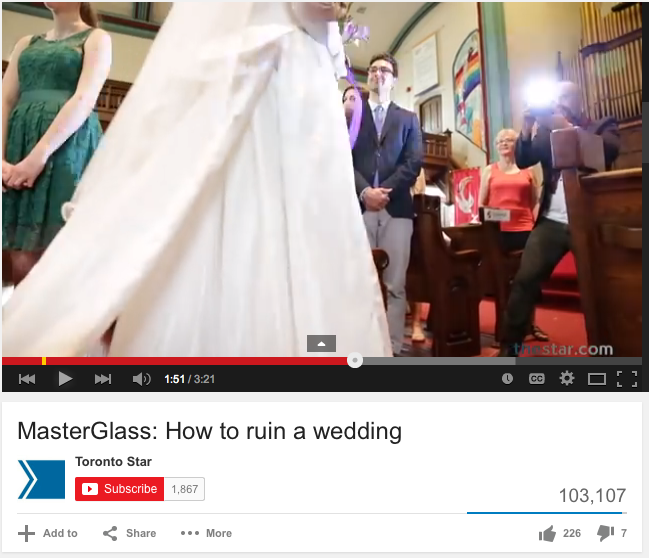 Slawnych said that many of the ideas for Master Glass came from readers.

“Everything from lighting to lenses to how to shoot sports,” he said.

“Anyone who is a photography buff always asks any photographer on the street: ‘What do you use? How do you shoot that? What’s your favourite lens?’ ” he added.

“We’re just taking those questions that the public usually [asks] us and making it in a forum that’s really easy for people to see and learn from.”

After a year, Master Glass had run its course and the series evolved into On Assignment (also sponsored by Canon).

“On Assignment is something that we just thought we’d take it to the next level and see what the public thought of that,” Slawnych said. “It was better if we actually went with the photographer to the assignment, compared to just talking about the assignment afterward.”

In addition to boosting The Star’s online product, the series highlights the value of news photographers’ work, Slawnych said.

As North American newspapers underwent major rounds of cost cutting during the past decade, some photography departments were gutted.

For example, in early 2013 the Chicago Sun-Times laid off more than two dozen staff photographers before taking back four of them.

And in early 2014 the Globe and Mail laid off all but two of its staff photographers.

Master Glass and On Assignment are, in part, designed to promote the importance of The Star’s photo staff, Slawnych said.

There are also more quantifiable benefits.

“We’re making money with this as well,” Slawnych added. “Every episode we do is actually sponsored by Canon . . . We’re actually a revenue generating department.”

MORE SOCIAL MEDIA ON ITS WAY

The Star always has social media projects in the works, Slawnych said.

“Who knows what’s going to be next,” he said. “There might be something within the next year that we have to brainstorm and think of where photography is heading and how can we keep this up.”