Can you determine what X and Y are?

X is a democratic country located in the Baltic region of Northern Europe. It has a population of 1.3 million and is one of the least populated member states of the European Union. Final hint: its capital is Tallinn.

If you guessed Estonia and Estonian Air you would be right.

Since 2006, Estonian Air was in a precarious financial situation.  It had a rising debt ratio and was operating on a net loss basis – year after year.  The 2008 crisis only added to the misery of what had been, and still was, a deteriorating balance sheet.

Social Media and Crowdsourcing to the Rescue

Estonian Air named Tero Taskila as the CEO and President of Estonian Air on 1 June 2011.  The Executive Board gave him a rather “broad” mandate: give Estonian Air a complete makeover. Tero, who is regarded in the industry as a highly innovative individual, decided to launch a unique social digital media campaign based on crowdsourcing to further enhance the airline’s services and “win over” more passengers.

“We started to build a new Estonian Air with the launching of a project called “My Estonian Air”. The project allows our employees, customers, owners and partners to participate in shaping their own airline for the future. Our objectives are to involve customers in the process of developing a new Estonian Air, to engage customers through social media and to continuously gather customer feedback to improve our services and products”. – Tero Taskila, former CEO and President of Estonian Air

Customers were given the opportunity to provide feedback to the airline executives on what type of services they wanted – whether it be an enhancement to existing services or the introduction of new services.

Estonian Air engaged with them via social media and reached out to them using various platforms such as direct email, social web and Facebook. 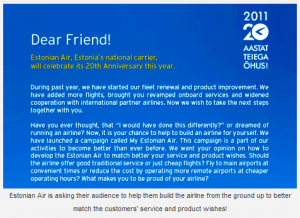 By allowing passengers to take ownership of the airline, the results were immediate.  On the first day the “My Estonian Air” campaign was launched, 300 responses were received.

“We got 5500 ideas from 3000 customers. Roughly 80% where from residents of Estonia”.– Tero Taskila, former CEO and President of Estonian Air

There were two major “complaints” that dominated the conversation. Passengers wanted more European destinations added to the flight routes and as well as a higher frequency of flights to existing routes.

As per the passengers’ suggestions, the airline proceeded to enhance their travel reach and launched new flight services by opening new routes to destinations such as Venice, Vienna, Helsinki and Hannover.

The executives also introduced a higher frequency of flights on a weekly basis on key business days (to popular destinations) in order to customize flight schedules to meet the customers’ requests.

A frequent passenger suggestion was to “enhance” the quality of food served during the flight.  Estonian Air took this very seriously and introduced the “Chefs on Board” innovative service whereby passengers were served gourmet meals presented by a leading Estonian chef who designed the meal and served it himself DURING the flight! 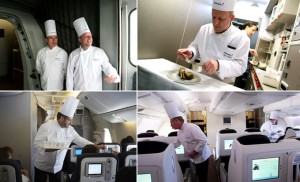 Another big “coup” was the introduction of the AirScore loyalty program, a first-of-its kind reward program launched by the airline. This is a program that rewards subscribers for spreading the word about the airline – they do  NOT have to fly with the airline to participate in the program, all they have to do is to communicate the merits of the airline with friends, relatives and the general public. The subscribers earned points by posting and sharing information about the airline with other people (such as on Facebook). They also get points by having other people join in the AirScore program.  The points can be redeemed to obtain a discount on airline flights or free access to lounge area. Two weeks after the launch of this program it had recorded over two million impressions. 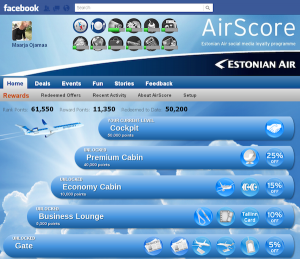 Crowdsourcing Pays Off – Up and Away with Awards

“The airline was selected as the world’s best airline to generate revenue through social media. Esto­nian Air became the first airline and company in the world to have a social media based loyalty program”.

“The best social media campaign – award was received during the annual Mega Awards in Miami, USA”.

In 2012, one year after listening and implementing numerous requests from loyal and new passengers, Estonian Air was proud of the results:

There is no doubt that some of these successes were directly attributed to the innovative social media campaign that Estonian Air undertook to adapt their services and meet passengers’ requests.

The key takeaway is that if executives use collective intelligence, feedback and suggestions gathered from their target audience (in this case loyal and new passengers) and use that information to enhance existing services and create new services, it can yield royal dividends. Companies should listen and adopt the feedback provided to them by their customers (or the general public) in order to incorporate these elements while designing new products or services. 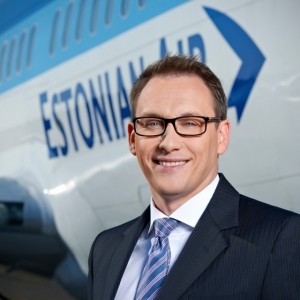 I was fortunate enough to have the opportunity to connect with Tero Taskila to ask him a few key questions surrounding his key strategic initiative to launch the “My Estonian Air” campaign.

You had decided to actively engage with your customers via social media to further enhance your existing airline services and to implement new services  based on their feedback and suggestions. What was the reasoning behind this crowdsourcing initiative?

The campaign was two-fold. Estonian Air was lacking a clear brand identity. Once it became government-owned, the branding was aligned towards being the business card for the country, which is known for IT successes such as Skype etc. That in mind, we wanted to create something to engage local people and make them take the airline to be their own national pride. For the foreigners, we wanted them to start thinking Estonia. Of course, from the marketing perspective, we always wanted to look bigger than the airline that we really were. The “my Estonian air” campaign was success. We got 5500 ideas from 3000 customers. Roughly 80% where from residents of Estonia.

What were the top comments/suggestions you received from your customers and how did you address them (i.e. how did you change or introduce new services to meet those requests)?

We clustered the ideas into three categories

– difficult but we want to do

Do you think your campaign was successful?

Yes. We measured the brand image after the campaign and got improvement on all the metrics.

How important do you think it is for businesses to engage with their customers in order for them to develop services or products that “they” (i.e. the customer) want?

It’s important. The customers will talk about the business anyway. The businesses need to pay attention and ideally also try to guide the discussion. That’s why we wanted also to create AirScore. It was the first social media loyalty program. The purpose was to attract people to engage with, talk about and actively promote the brand under our supervision and terms. This program was a runaway success. AirScore got one million impressions in just couple of weeks (not bad for airline which carried 450 000 passengers a year).

Do you believe companies should let customers “design” and propose new innovative ways on what they (the company) should sell?

Yes. All businesses shape the product based on customer feedback. You can get it in social media or with physical events.

How do you see the future of crowdsourcing?

It will allow us to develop products and services faster and cheaper, which in turn will lead to products serving more specific and sometimes narrower group of customers. This in turn will fragment the crowd sourcing approaches. At the end, the lifecycle of the products will be shorter.

Yes. We have reached that point already a few years ago. The companies need to be able to adapt to a changing environment. Good example of this is the automotive industry. The demographics are changing so fast that the manufacturers are now creating investment companies and crowdsourcing funds. They seek to find ideas and startups to help them design future direction of the products and services.

Can a business survive without engaging in social media?

Most likely not. At least they will not be as successful as they could be with faster, and more convenient engagements with the clients.