How social media is used for business performance:

My wife has been captivated by Icelandair’s social media offerings lately. She regularly nudges me to peek at her laptop screen to check out an online marketing campaign or a clever tweet by Iceland’s flagship airline.

As customers (my wife and I have flown with Icelandair several times during the past two years) we’ve tuned into Icelandair’s online messaging and have often been amused — and it appears that’s no accident: The airline has ramped up its social media activities in the past five or six years, and is fully integrating its marketing campaigns across multiple social media platforms.

The Reykjavik-based company — which, according to a recent annual report, transported 2.6 million international customers in 2013 — regularly posts messages and photos on Facebook, YouTube, Instagram and Pinterest. But Twitter seems to be the social media platform that Icelandair uses most often to connect with the public and build customer relationships.

Here are a few examples of how Icelandair has used Twitter to celebrate the achievements of its customers; to run contests; and to respond to customer complaints.

A mop-topped nine-year-old boy draws a picture of an Icelandair passenger jet. Someone takes a photo of him proudly holding his latest masterpiece. Icelandair sees the photo and tweets it, including a link to a video of him drawing the picture. And if that’s not enough to celebrate the boy’s accomplishment, Icelandair also published the photo in its glossy in-flight magazine. Through a few simple gestures, Icelandair has strengthened its relationship with a little boy, his family and friends. 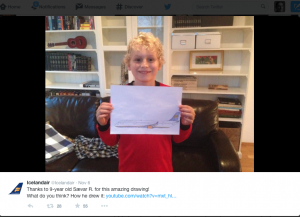 As another example, in November 2014 Icelandair tweeted a photo of the special welcome it gave to a team of chefs returning home after winning gold medals at the Culinary World Cup. 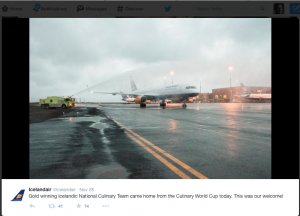 To advertise the resumption of seasonal flights from Halifax, N.S., in May 2015, Icelandair ran a scavenger hunt using Twitter to send clues daily for three days straight. Check out #HaliFindUs on Twitter to see how excited some Haligonians were made by the campaign. Winners were given two free tickets to Europe and were congratulated in tweets and through the video (below) posted to YouTube.

And as part of a larger ongoing campaign to entice trans-Atlantic customers to stop in Iceland for up to seven days, without incurring extra airline fees, Icelandair is conducting a promotion called “Stopover.” The campaign also includes a contest. In addition to promoting the campaign on its website, Icelandair’s coordinated social media marketing strategy connects with its customers through Facebook, Twitter, YouTube, Google+, and Instagram.

A lucky young traveller named Kat, from Seattle, got a surprise 48-hour stopover during which a personal guide whisked her around Iceland for a series of adventures. Of course, all of it was captured on video. Kat was so smitten with the experience that she choked up while giving a brief testimonial.

Visitors continue to generate online buzz by for the Stopover campaign by adding #MyStopover to their tweets and to the photos they post on Instagram, which Icelandair frequently retweets and sometimes posts on its own Instagram page which, I believe, makes customers feel engaged and valued.

Responding to customer questions and complaints:

As well as being a vehicle for Icelandair to broadcast messages and exchange heart-warming experiences, Twitter is also a platform for fielding complaints.

When one well-built Icelandair customer complained about being uncomfortable in his airplane seat, the airline responded with humour — and a compliment. The response drew an amazing reaction from Icelandair’s Twitter followers: It was retweeted more than 700 times and favourited nearly 900. 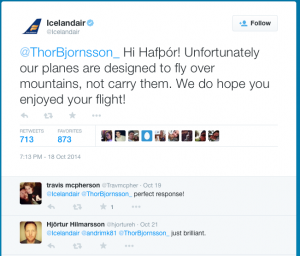 But the witty social media crew at Icelandair doesn’t always deploy humour when they respond to criticism. In the fall of 2014 a customer used Twitter to complain that her camera went missing and that Icelandair was responsible. Icelandair responded politely — but without a hint of humour — by asking the customer for details and to contact yourcomments@icelandair.is Five months later, at the time of this posting, it appears that the issue still hasn’t been resolved.

In an interview for the ebook Brilliant Online Marketing, by Alex Blyth, Icelandair’s Katrina Erna Gunnarsdottir said that as part of a branding overhaul starting in 2006 an email campaign was developed to connect with existing customers and build brand loyalty.

According to Blyth, during a nine-week period in 2009 the email campaigns more than doubled the number of Icelandair website visits (to 200,000) compared to the same period in 2008 and significantly boosted online bookings.

Of course, Icelandair’s efforts to build customer relationships through social media sometimes fall short. For example, my request to speak with an Icelandair representative for this blog initially got a positive response. After I tweeted a request for information on the airline’s social media strategy, within two hours someone at Icelandair, via a direct message over Twitter, sent a company email address for me to contact. Unfortunately, someone at Icelandair dropped the ball: Nobody at the company directly provided information for this blog post.

With regard to email marketing, Gunnarsdottir offers three tips: finding out what customers want is trial and error, but make sure that you know what you want to achieve before starting your campaign; don’t underestimate the power of surveys; and don’t rely too much on personalizing emails — strong creative ideas and good execution are key.