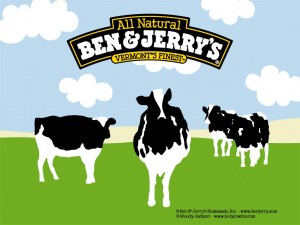 Businesses and their consumers in the twenty-first century are engaged in a constant conversation online through social media platforms. Now, more than ever, consumers are aware of what is involved in the products and services they are purchasing. With social media technology ever advancing, businesses are using transparency and honesty to create a trusting relationship with their clients. One business in particular, has been doing this since the beginning. Not only do they make great ice cream, they have created a business that is profitable and socially responsible with a name that we have come come to know, love and trust.

Meet Ben & Jerry, two normal guys with a passion for ice cream. Their humble beginnings began in 1978 with a $5 correspondence course in ice-cream making and a $12,000 investment. From there Ben & Jerry opened their first ice cream scoop shop in a renovated gas station in Burlington, Vermont. The ice cream business they built is as legendary as the ice cream is euphoric. In 1979, Ben and Jerry celebrated their one-year anniversary by holding their first-ever Free Cone Day with free scoops for all, all day long.  The annual ice cream give-away still continues today in scoop shops around the world.

The company shows its transparency and value not only for their customers, but also for communities and social causes. Customers can access recipes online, familiarize themselves with personalized messages from founders and staff, and learn about Ingredients Sourcing & Purchasing Practices, Manufacturing Practices, People & Community & ‘Giving Back’ Practices.  The Company product values are stated passionately along with their current initiatives including Fairtrade, Marriage Equity, Climate Justice and Peace Building.

The brownies that go into Ben & Jerry’s ice-cream are made at Grayston Bakery, a unique company that creates job opportunities for people with troubled backgrounds who might otherwise have had difficulty finding employment.

In an interview with Democracy Now! Co-founder Jerry Goodman emphasizes the importance of being transparent and open with customers regarding ingredients. In regards to GMOs, he explained that it wasn’t about the debate over the health factors of GMOs, relabelling their products was about the consumers right to know.

“People are really passionate about the right to know what’s in their food. And that’s what the issue is here, is simply about the consumers’ right to know. It’s about transparency and being honest, so people have the right to choose what sort of foods they want to buy and eat themselves and feed their families.”

His passion and logic went as far as to say:

“It is just so hard to imagine that other food companies wouldn’t want to tell consumers what is in their food.”

It’s not just an advertising strategy, it’s a way of life. Ben & Jerry’s have been listening to their customers for years. Digital Marketing Manager Mike Hayes in an interview with On Brand shares how the infamous Chocolate Chip Cookie Dough flavour was invented after some college students came down to the shop with cookie dough in hand, wanting to add it to their ice-cream. Five years later it was being sold as one of the most well-liked concoctions and remains a fan favourite to this day.

From suggestions via postcards to the more modern #CaptureEuphoria instagram contest, fans have been sharing their input with B&J for many years and they are being heard.

Ben & Jerry’s takes the time to listen and glean from their fans. They initiate a conversation through social media asking questions such as, ‘which flavours would YOU combine to create YOUR perfect milkshake?’ They also takes the time to `like` or respond to their Facebook comments. Most comments involve ice-cream fanatics loving their vast range of irresistible flavours, but some are not so upbeat.  One ‘udderly’ dissatisfied customer was messaged back with a genuine apology asking to be contacted through private message to have his issue resolved.

Creative campaigns are another way this company attracts attention. The following tag lines have appeared on the company’s colourful Facebook page:

1  Keep your costumers engaged.  Respond to both positive and negative comments.

2  Create innovative campaigns to draw customers back to your social media platforms.

3  Create a brand that is invested in consumers and their communities.

To contact the author of this entry please email at:  lfodor@uoguelph.ca OR katelyntina@gmail.com – U of W, Social Media for Business Performance students.