General article on crowdsourcing and crowdfunding

Nearly a decade ago, Jeff Howe‘s groundbreaking article in Wired magazine – “The Rise of Crowdsourcing” – marked the beginning of the crowdsourcing movement.  In a blog that accompanied his June 2006 article, he wrote:  “Simply defined, crowdsourcing represents the act of a company or institution taking a function once performed by employees and outsourcing it to an undefined (and generally large) network of people in the form of an open call. This can take the form of peer-production (when the job is performed collaboratively), but is also often undertaken by sole individuals. The crucial prerequisite is the use of the open call format and the large network of potential laborers.” (source Wikipedia) (As an aside, Wikipedia is a fine example of crowdsourcing.  Started in 2001, this self-proclaimed ‘free-content encyclopedia’ boasts more than 76,000 active contributors working on more than 31,000,000 articles in 285 languages.)

Later that same year (2006), the TIME magazine cover and article featuring its person of the year picked up on the theme of crowdsourcing and featured the impact of the individual user in the information age. 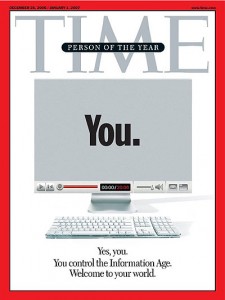 Crowdfunding – a way to use social media to raise funds – was inspired by crowdsourcing and has also been on the scene for many years, growing in sophistication and application.  Like crowdsourcing it is very much related to online communities and social networks. The crowd can already exist as a community but they can also suddenly form from disparate groups around the world who all happen to share an interest in funding a person, project, event, or a campaign.  Platforms on the web exist to help develop campaigns.  They include, among others:

And small business uses crowdfunding to find investors who are interested in being involved in a start-up company, as described in this sound clip from CNN “Crowdfunding could change the face of small business”:

The reasons for crowdsourcing include but are not limited to: solving problems that cannot be solved internally, getting inspiration from the crowd, creating buzz for new products, using crowd contributions for market research, accelerating the product development process, reducing costs for creative work, and identifying potential talent for future hires.

And crowdfunding continues its evolution.  The National Crowdfunding Association of Canada (NCFA) holds its first-ever conference on crowdfunding March 2015.

To contact the author of this entry please email at:  mhood2323@gmail.com