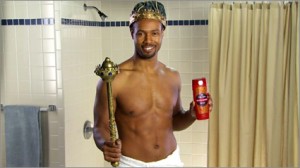 The grooming and personal care industry is extremely saturated and highly competitive. When you walk down the soap aisle, you have hundreds of products to choose from. How do you decide what’s the right choice for you? Claims of superior quality and cleaning power only go so far. It boils down to which brand has created top-of-mind awareness through their advertising and social media campaigns.

As the first to market, Old Spice practically invented body wash for men. As the category heated up, so did the competition.

With over 70 years of experience in the personal care category, Old Spice was a seasoned player with a solid understanding of how to market their products to their primary customers, men. After losing significant market share by 2006, Old Spice looked to the Wieden+Kennedy advertising agency to help them stand out from the competition.

Through extensive research, Wieden+Kennedy discovered that women purchased 70% of the body wash for men in their households and they were purchasing female-focused products. Old Spice had to change this. They realized that they now had to appeal to both men and women while showing that men needed their own products.

The Old Spice Man was Born

In 2010, Old Spice launched the highly successful “Smell Like a Man, Man” campaign. This campaign, created by Wieden+Kennedy, was one of the most memorable and creative campaigns of all time. It changed the way companies use social media to engage their customers.

The first commercial featured Isaiah Mustafa (former NFL wide receiver) standing in a towel in a bathroom. The commercial starts with “Hello, ladies”. This was a significant change for the Old Spice brand who focused solely on the male audience.

Getting Social with Old Spice

The commercial initially launched on YouTube in February 2010 and then premiered on television a week later. This ad enabled Old Spice to capture 75% of all conversations in the category by promoting the video across multiple social media channels including Twitter and Facebook. It was a overnight success and became a cultural phenomenon. This kick started their venture into social media marketing. 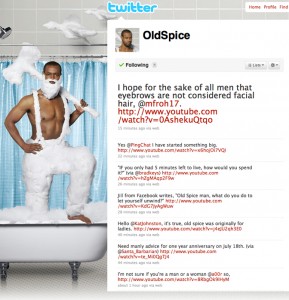 As the video gained viral success across major social media platforms, Old Spice began engaging with their customers across the platforms. Customers began asking questions, starting conversations and providing Old Spice with feedback. Old Spice engaged customers with the next step of their campaign – personalization.

“It’s always our goal to engage our consumers in a way that’s not only entertaining but also relevant, humorous in our own Old Spice tone and worthy of their attention. Digital is perfect because you can quickly gauge the reaction as people are very open to providing feedback to the advertising.” – James Moorhead, Brand Manager at Old Spice.

Over two days, customers were encouraged to ask the Old Spice Man questions on social media for a chance to have a personalized response via video. Questions were sent in by everyday customers, brands, and celebrities including Starbucks, Twitter, NHL BlackHawks, Alyssa Milano, Huffington Post, Demi Moore, Kevin Rose, Ryan Seacrest, and Perez Hilton.

In response to select questions, Old Spice filmed over 185 videos in the two day span. Videos were posted to YouTube and across social media channels. By strategically selecting videos, Old Spice increased their brand awareness through cross profile sharing. For example, Ellen Degeneres submitted a question on Twitter and received a response back. She shared this video on her social media platforms, website, and even played it on her television show.

The results that Old Spice obtained by focusing on customer engagement and response marketing for their initial campaign were overwhelming:

Old Spice has set the bar for what a successful customer engagement strategy via social media looks like. Here are the five lessons we’ve learned from the success of Old Spice:

1. Stay Informed and Understand Your Audience

Just because you’ve been operating in an industry for a long time, doesn’t mean you know everything. Old Spice was comfortable marketing to men and failed to realize the changes that were happening around them. Had they known that women were responsible for the majority of body wash purchases, they could have began appealing to them earlier and held on to more market share.

Especially if you’re going viral video route. You need to develop content that appeals to your audience and aligns with your brand profile. Old Spice did an excellent job of appealing to women, transitioning to appeal to men and using humour that everyone could relate to.

People like to talk and interact with other people. When connecting with your customers via social media, use their name in the response – it goes a long way! When Old Spice created their personalized videos, they used the customer names, read their question and crafted a personal response.

There is nothing worse than tweeting a complaint to a company and having radio silence! Old Spice does an excellent job at responding to their customers. When a customer posts to their Twitter account, Old Spice typically responds within the hour. This engages the customer and makes them feel like they are heard. Additionally, Old Spice focuses on creating conversations. When a customer posts something funny, Old Spice posts something even more humorous. This back-and-forth typically continues until one person gives up!

5. Connect With Your Network

We’re all connected – why not take advantage of it? Old Spice strategically selected the questions that they created video responses for in hopes that these companies would continue to share the videos – and it was a smart move! By selecting companies such as Starbucks and Huffington Post, Old Spice guaranteed additional exposure. 7.19 million people follow Starbucks on Twitter and by a simple retweet, these 7.19 million people have now been exposed to Old Spice and will likely continue to share with their followers.
Old Spice has continued to use this formula for success throughout their advertising over the last 5 years. 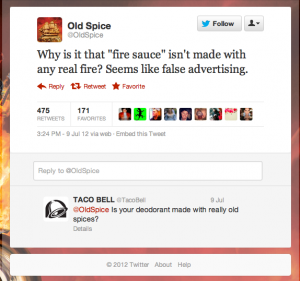 Old Spice did a lot of things right, however, it can be argued that they haven’t continued to engage their clients after the campaign. Gary Vaynerchuck, Co-Founder and CEO of VaynerMedia criticises Old Spice over not continuing to engage their followers. The most important lesson is once you’ve got them hooked, you have to repeat the process.

To contact the author of this entry please email at: aliciambedard@gmail.com