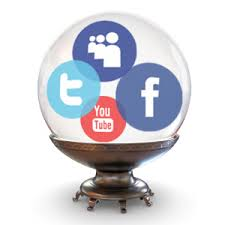 It’s been an epic year for social media marketing, and you’re probably wondering what the future holds for next year.  What will 2015 bring in terms of new developments and trends in social media?

With the rapid proliferation of mobile devices, and the explosion of the Internet of Things, people will be carrying, utilizing, and depending on their devices more than ever. Smartphones and tablets have become the center of consumers’ multiplatform lives.  This shift to mobile is reflected in the amount of time consumers spend on their devices daily.  But, the shift will not stop there. We are already moving beyond smartphones and tablets to ‘smart’ cars and wearable technology.  To support consumers’ demand for new technology and their relentless quest for connectivity and information, new platforms will evolve.

When asked to share his predictions on the future of social media and the ways in which it will impact businesses, Jayme Pretzloff, Online Marketing Director at Wixon Jewelers(@jpretz) says,

“The social media landscape in the future will continue to evolve into a segmented multi-platform world, making it continually difficult for marketers to ensure they are reaching their target audience in the right place. Leveraging multiple platforms in the correct way will allow for a significant boost in brand awareness, share of voice and even more touch points with your potential brand advocates.”

“Social media is increasingly being used for real-time sharing. Users depend on short snippets of text, photos or videos to consume information. For this reason, platforms like Twitter, Vine and Instagram continue to be hugely popular.”  Read more at www.business2community.com

According to Erik Qualman, author of Socialnomics: How Social Media Transforms the Way We Live and Do Business, “social media is here to stay. It became the most popular activity on the Web in less than three years and appears to satisfy a profound human need to understand what the majority of people are doing, despite the fragmentation caused by the Web.”

Technology has redistributed a portion of marketing power from corporations to consumers.  To be successful, businesses need to be aware that social media is changing the way the marketing game is played.  One of the most viral videos, demonstrating how powerful social networks have become, is the Social Media Revolution.

Bruce Power is the world’s largest operating nuclear generating facility.  The Bruce Power site has a long and proud history that goes back more than half a century.  It has evolved from its roots as the Douglas Point Nuclear Plant to an eight unit site, supplying roughly 6,300 megawatts of electricity to Ontario’s power grid, powering nearly 30 per cent of 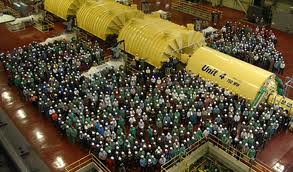 homes, schools, hospitals and businesses in the province.  Supporting this kind of growth over the years has required communicating the benefits, costs and risks of nuclear in transparent and objective ways. Managing stakeholder communication is critical for Bruce Power given limited public understanding of nuclear, changing political tides and media bias, to name a few challenges.

In order to enhance its reputation, build awareness and continue its educational outreach, Bruce Power has recognized the necessity and value of engaging with stakeholders and the public through social media.  Over the past 6 years, Bruce Power has steadily, and now with increasing focus, established a multi-platform social media program.  It now stands among leaders in the Nuclear Energy Industry on social media. 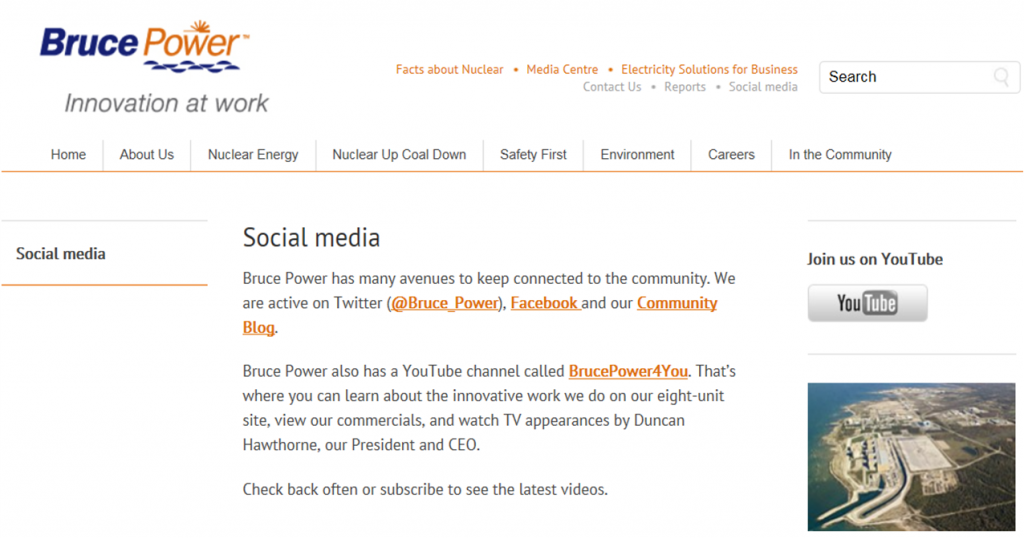 How do employees view the company’s social media efforts?  Here is one comment from Denise, a Bruce Power employee:

Beginning with You Tube in 2008 and a website make-over in 2011, Bruce Power has added Twitter –  @Bruce_Power (1800+ followers), Facebook (800+ fans) and a Community Blog to its repertoire of tools.  Understanding the relevance of mobile technology, and in alignment with goals to educate and engage the marketplace, Bruce Power has recently released iPhone and iPad apps.  To build energy usage awareness and focus on environmental sustainability, there’s an app for that.

While social networks represent enormous branding opportunities, they can also present reputational risks to businesses.  Says CEO, Duncan Hawthorne, “A reputation holds the highest price, because you don’t give yourself a reputation, everyone else gives it to you.”  Nowhere is this more important to realize that in today’s digital marketplace. The speed and reach of social media can put companies today at much greater risk of losing control over how they are perceived.  Reputations that may have taken more than half a century to build can now be damaged in a matter of moments.

Heading into the future, however, Bruce Power will “stay the course”, says Communications Specialist, Dwight Irwin, and continue to leverage the opportunities presented by social media.  To minimize risk, it will monitor and “listen carefully” to social media networks, he adds.  Bruce Power will emphasize creating quality content that pulls people toward the organization rather than encouraging overt sharing of opinions.  While Bruce Power still has an important place for traditional communication channels and public relations strategies, it will also stay close to developing social media technology in an effort to learn what tools best suit its audience and its industry.  Dwight Irwin sums it up this way:

Will the big three (Facebook, Twitter, and YouTube) continue to dominate the social media space or will we reach a point of saturation and fatigue?  Will people take a discerning step back to ask themselves, “What is really important to me?” and “How can I cut through the all the other noise?”  Robbin Phillips, President of Brains on Fire, purports that, “As the ‘return to real life’ becomes a higher cultural priority, we’re going to see people eagerly embracing technologies that empower them to achieve greater balance.”

According to an article in Social Networking Success, “look out for new social networking sites designed around very specific purposes. Rather than a very general network like you find on Facebook, you will find sites devoted to people with specific interests and/or specific business connections and interests like groups in sites like Linked-In.”

Yet, social media is not a fad, it is an evolving change in the way we communicate.  As Raghav Singh points out in his article The Last Social Network: The Future of Social Media  “once the novelty wears off, the technology has to be seen as being capable of delivering some specific value. When that happens, the technology enters the mainstream — eventually becoming something like a utility. We become dependent on it, but we increasingly notice it less and less.”

We don’t have a choice in whether we use social media, but we do have a choice in how we use it, how we build our messages, and if we choose to deliver content that adds value to the lives of our audience.  The key to the future is to stay connected, be flexible and willing to adapt when the social media game changes.

The future of social media marketing rests in the hands of the users. Users will have to decide where to spend their time and energy. There’s only so much time in a day, and the noise is deafening.

If you have concerns as to the accuracy of anything posted on this site please send your comments to Peter Carr, Programme Director, Social Media for Business Performance.