I have a confession to make. I like to eat McDonald’s food – particularly the French fries and Big Mac. I always have and chances are I always will. That said, I certainly don’t go to McDonald’s to get my ‘greens’ or ‘veggie-full.’ I know better than that.

However, as one of the world’s largest and well-known brands in the world, McDonald’s is constantly critiqued and questioned for its menu’s nutritional value, as discussed by the company’s Director of Nutrition Julia Braun.

In this day of age, social media can serve companies such as McDonald’s as a strategic marketing resource, which the company is doing with more than 54 million ‘Likes’ on Facebook, over 2.6 million followers on Twitter and utilizing Instagram, Google+ and Pinterest to attract consumers and market product promotions. However, the reception hasn’t always been positive. Being criticized on Twitter and Facebook for introducing a Happy Meal mascot that some consumers deemed too frightening is just one of many examples.

To help dispel the notion that McDonald’s menu is unhealthy, the company recently launched a question and answers-style ad campaign, promising to provide “real answers” through various social media channels. Most likely, the decision to introduce such a campaign is the result of a recent study conducted by Brand Keys. According to the report, Millennials reported a 20% decrease in visits to fast food chains, 13% indicted fast food was “cheap” and “edible” but not much more than that. Fifty-three percent (53%) characterized it as “dollar food,” the result of a habituated reliance of fast food brands like McDonald’s (credited as the originator of the ‘Dollar Menu’) to boost sales. Baby Boomers indicated an 18% drop in fast food restaurant visitation, citing that they were looking for “quality food,” and didn’t expect to get it at places like McDonald’s. Gen Xers reported an 11% decrease in visitation. They wanted their food fast, but even that’s something McDonald’s has been reported struggling with.

“People are looking for faster, more straightforward responses to their questions about our food,” Ben Stringfellow, a spokesman for McDonald’s USA, said in a statement. “We’re looking forward to engaging in two-way conversations with as many people as possible.”

It’s too early to tell at this stage if the campaign will be a success or not. Hopefully it won’t generate the negative publicity its Instagram ad promotion did this past summer.

To compensate for decreased sales, McDonald’s ran a number of sponsored ads on Instagram to promote the Bacon Clubhouse burger. What better way to attract the attention of hungry, young, smartphone-users?

“While we are unable to provide specific details about our media strategies, we are always looking to engage with our guests and fans in fun and relevant ways in social media. Instagram allows us to share compelling and entertaining photos about our brand, food and more in unexpected and innovative ways,” said David Martinelli, digital marketing manager at McDonald’s.

Unfortunately, the campaign ruined many appetites. 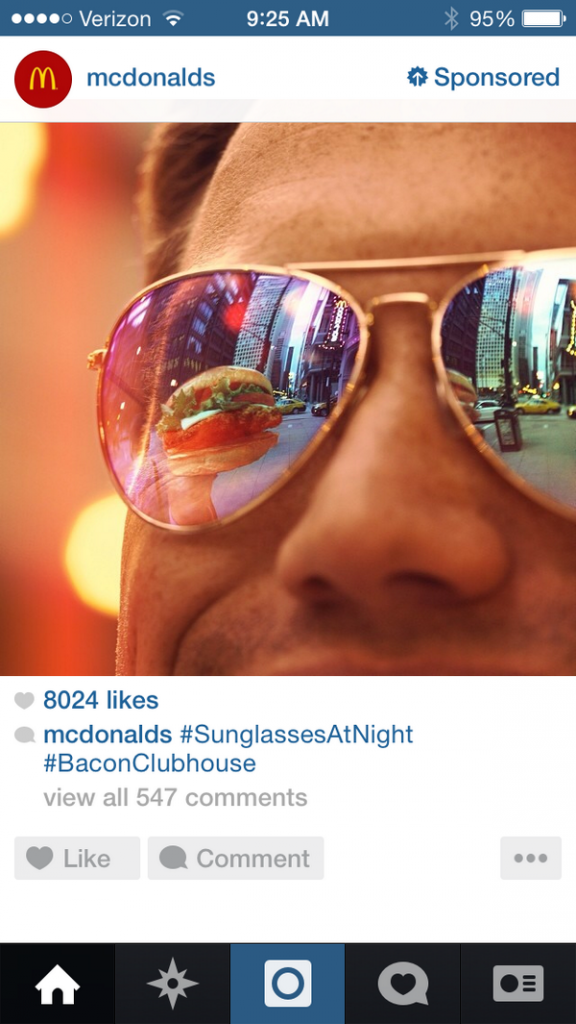 One such ad appeared on a Monday morning. The post had 45,347 “likes” and 1,941 comments, many of which were negative from users who were upset at seeing a McDonald’s ad in their newsfeeds.

By “forcing” its ad campaign on Instagram users, the company created a backlash from fans and non-fans alike. Hopefully history won’t repeat itself.

Disclaimer: the author of this blog enjoyed a Big Mac and fries while editing her post.

To contact the author of this entry please email at: traceypearcedawson@yahoo.ca

If you have any concerns as to the accuracy of anything posted on this site please send your comments to Peter Carr, Programme Director, Social Media for Business Performance.