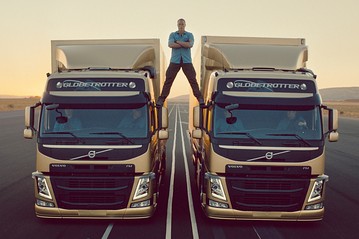 Description:
Social media is not a fad, rather it is the present and future of communication. It is a constantly evolving form of communication that connects people around the world in ways we never thought possible. Businesses are able to interact with customers on a personal level to gain insights on product performance, while advertisers embrace targeted marketing through social media.

Here’s a podcast by Harvard University on the effects of social media:

“If we talk to our salespeople in our 140 markets all over the world,” Vilhelmsson said, “they tell us very often one of the first things prospective customers bring up in conversation is the viral film.”
– Anders Vilhelmsson, PR director for Volvo Trucks

This campaign featured multiple “test” videos that demonstrated the advanced technology that Volvo Trucks can offer drivers. Actor Jean-Claude Van Damme successfully performs the splits between two Volvo trucks that are reversing down a closed off highway. This campaign was targeted specifically at truck drivers, but due to the immense success of the “Epic Split” video, the campaign went viral around the world. The video amassed over 73 million views and multiple parody videos by fans and comedians. The campaign picked up a number top prizes at Cannes Lions; 20 awards, including eight gold prizes and two prestigious Grand Prix in categories Cyber and Film.

The “Epic Splits” video is a great example of the power of social media and how a viral campaign can improve a brand’s exposure in the global market. “Truck buyers are surrounded by a lot of influencers, and the largest group is truck drivers. And you can’t reach truck drivers with traditional advertising,” said Engstrom of Forsman & Bodenfors, the agency behind the video. “We needed to go broad, and we didn’t have a media budget, so we decided viral was the only way to go.”

Lessons Learned:
– The future of social media is moving towards the integration of new technologies and interactive hardware
– Viral campaigns help boost brand credibility and exposure no matter the size of the company. It all depends on the popularity of the campaign.