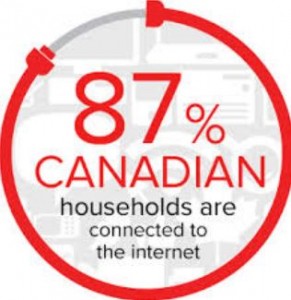 Did you have any idea that Canada is the country with the globe’s highest number of Internet users?  In 2009, 68 percent of Canadians participated in on-line activity.  In 2013, Canada continues to be one of the most ‘wired’ countries in the world with nearly 87 per cent of Canadian households connected to the Internet.

According to a January 2013 Huttington Post article, Canadians continue to be the heaviest internet users despite uncompetitive prices and speeds. A 2013 Factbook from the Canadian Internet Registration Authority (CIRA) reports that Canadians spend an average of 45.6 hours online per month, compared to 40.3 hours in the U.S. and a world average of 24.4 hours.  As internet usage continues to rise year over year, small business must seize the opportunity to utilize mobile social media to attract new customers.

Last week I began to explore geo-location based tools to try to attract people off the beach and into the Sauble Trading Post store – specifically Foursquare.  I have continued to research the social media marketing strategy and found the it is important to use an application with a “large installed base” so that efforts to reach customers has a return on time invested.  It appears that the Foursquare application has struggles and is said to be losing popularity.  Given this new data, I have decided to take advice from last week and engage in social media marketing in a platform I am comfortable working in.

Currently, the Sauble Trading Post only has a Facebook page. I recently learned that in October 2014, Facebook launched a new feature to make advertising for businesses easier and more effective.  It is called “Local Awareness Ads“.  A local awareness ads would give the Sauble Trading Post the opportunity to place an ad on the mobile device of a Facebook user when they are physically close by the store. This may prove to be a very cost-effective way to advertise to reach the day trippers sitting on the beach.  See the Facebook Local Awareness Ads video for information on this newly launched service.

Julie Morse discusses how Facebooks’ Local Awareness Ads are created to provide targeted exposure via Facebook. Promotions are generated purely through GPS services. Businesses give Facebook their physical address and precise geographic radius of where they want to advertise. Subsequently, Facebook targets individuals who are near or are within that radius. Establishments can then adjust their target audience by specifying demographics such as age and gender.  The Sauble Trading Post would target the radius from French Bay Road and Southampton Parkway in the South to Lake Shore Road and Main Street Sauble Beach in the north extending 2 kilometres from the beach.  It seems like a reasonable radius to target the travelling public.

I talked to Jason Nagel, Executive Director – Avenue A Advertising in Owen Sound, about their social media capabilities.  Jason said, “It is no longer just a college trend. Facebook has evolved into a critical business promotion tool. Our clients use Facebook to foster better customer relationships, build interest in their brand, and stay in front of a market with an increasingly short attention span.” Jason directed me to the video below that outlines their social media offerings.

I guess my question to my existing Facebook friend and fan base is: “Do you think it is cool or creepy that I will be able to reach you on your mobile device and share information from the Sauble Trading Post?  Do you mind if I send you advertising letting you know that we have a new flavour of ice cream or a new video release?  I want to use social media to attract new business, but I don’t want to annoy my existing and loyal customer base.  I encourage you to leave a comment on my Facebook friend and fan pages with your feedback.