Company: Toyota
Industry: Automotive
Description: Toyota is a Japanese motor vehicle production and sales company with its Head Office in Toyota City, Japan. Founded in 1937, the company is guided by Kaizen, a Japanese principle that entails making continual small improvements to business processes, which possibly has contributed to its wholehearted adoption of social media. 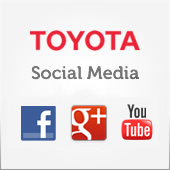 If you happen to have produced a lemon, make lemonade!
Somewhat active on social media since about 2008, Toyota stepped up its activity in 2010 after having to recall 2.3 million vehicles because of faulty accelerator pedals. Overnight, Google and Twitter were a-buzz with bad comments. Since at the time Digg had between 37 and 44 million unique visitors, the company chose to address the situation through an interview on Digg Dialogg. The clip that features Jim Lentz, President of Toyota USA, runs 28 minutes and is still available online.

At a company annual event a year or so later, Toyota data analysts presented a study they had done with data collected from Facebook and Twitter. The study showed it was possible to identify people who were in the market to buy and in the process of deciding between a Toyota and another make. The company invested in further R&D and Toyota’s sentiment-analysis system was born.

Create engaging content, monitor, repeat
Using this system, Toyota analyses free text and other content to see what people are saying about its brand and models. The information gathered is then used to make more accurate sales forecasts, determine customers’ favorite t.v. shows for ad and tie-in placement, identify problems and determine engagement with the brand.

Since the more active it is, the more data can be collected and examined, the company is very active indeed. Every opportunity serves to get its message across and engage in conversation, starting with its several websites, the pages of which can be shared on every imaginable application or social media site.

In a very informative interview conducted in 2009, Scott DeYager, Toyota Social Media Supervisor, shares the company’s strategy related to its online news room, how channels are chosen for specific campaigns, how trolls are dealt with, whether accounts are moderated and other important issues social media marketers need to consider. The audio clip, too voluminous to embed on this page, is available here. The interview also covers the use of personal accounts for brand promotion and choice of personal vs corporate accounts for social media channels. 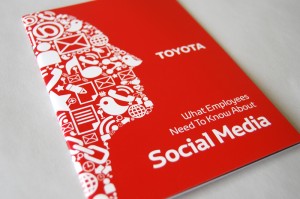 The customer as “part of the family”
Toyota adopts various styles of communication, from offering prizes through Facebook and YouTube, to engaging with people on Twitter and seeing to everything from public relations to customer service. To create a beehive effect, Toyota trains staff in social media and allows them to engage directly with customers. Its approach also covers community building and just plain socializing as a friend. Toyota social media department meetings include several other departments and content is developed by anyone with a good idea and shared where appropriate. Even the company’s strategies and insights are shared on the Toyota Social Media Marketing Facebook page, created for dealers and their employees as well as suppliers. Toyota car owners and fans can also access this page that connects Toyota Social Networks and Online Communities. This access goes a long way toward giving the impression of transparency, a feature that is now almost required due to changing customer expectations. As an added bonus, the strategy increases customer loyalty.

Open and available at all times

Toyota runs creative social media campaigns such as the 15 second video above. These short productions are posted on instagram and pushed through Facebook ads. Advertising costs are low, but the target market is reached and the videos garner likes and foster positive sentiment toward the brand. Clients and fans can also share on other photo-sharing apps like Vine and Snapchat, which further increases trust and engagement.

Sharing images such as the one above-(Toyota’s current facebook cover pic)-and videos through its Facebook pages helps Toyota get fans to connect with aspects of the brand as a whole. Open-ended questions are regularly asked on this channel, a strategy that allows customers and fans to express themselves while also providing data that otherwise would not have been available. Toyota also published another custom Facebook page that allows fans to do good works by voting for a charity they feel should receive a free car. (The campaign is called “100 Cars for Good.” )

On YouTube, Toyota features car models, commercials, how-to segments and community stories. In October 2014, Toyota USA’s YouTube channel had 62,641 subscribers and had been seen by over 81 million people. Clips like the one below featuring B.B. King engage at an emotional level.

If you have concerns as to the accuracy of anything posted on this site please send your concerns to Peter Carr, Programme Director.

Toyota’s use of social media has been covered extensively. For more information, see the following:

Stieglitz, Stefan and Krüger, Nina, “Analysis of Sentiments in Corporate Twitter Communication – A Case Study on an Issue of Toyota” (2011). ACIS 2011 Proceedings. Paper 29.

For more on social media and customer engagement, see:

Building a brand and lifestyle through customer engagement.

What is the definition of customer engagement?