Description of how social media is used in business performance: 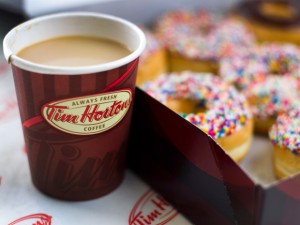 On August 26, 2014 Burger King agreed to purchase Tim Hortons for 11.4 billion.  The combined company will be majority owned by Brazilian investment firm 3G Capital and remain based in Oakville, Ontario.

Tim Horton’s has appealed to a broad range of tastes, with a menu that included premium coffee, hot and cold specialty drinks, including lattes, cappuccinos, espresso shots, specialty teas and smoothies fresh baked good and sandwiches as well as soups and other food products. As of December 29, 2013 Tim Horton’s had 4485 restaurants, including 3588 in Canada, 859 in the united States and 38 in Gulf Cooperation Council. 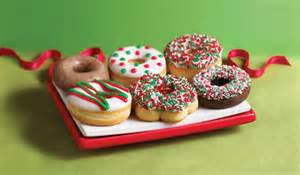 For Tim Horton’s 50th birthday they celebrated it with “The Bring it Back” promotion. Canadian customers voted for older items that were previously on the menu and bring back items with,“Tims Bring it Back” which will return to stores later this year, according to Huffington post.  These favorites include Tim Horton’s éclair and the pie and duchy timbit.  Customers chose from five favorites from each decade, which began with the 1960’s.

“For over 50 years Tim Horton’s has been updating its menu to suit the evolving tastes and preferences of our guests, and with that, some menu items have come and gone, yet we continue to receive requests to bring back beloved menu items,” said Glenn Hollis, vice president of marketing at Tim Horton’s

After five weeks of “Tim’s Bring it Back” beloved menu items from past decades with over 300,000 unique views on Timsbringitback.ca and thousands of comments on social media Tim Horton’s has been happy with its engagement of customers, in which items to put on the menu. Canadian’s have been voting daily for the top contender at Timsbringitback.ca and on Tim Horton’s Facebook page, Twitter@Timhortons, and Instagram@timhortons.  The éclair was the first nominated for the 60’s voting,which ran from May 1-14 and the éclair had 40% of the votes as a winner, there were over 200,000 votes of comments on social media.  Tim Horton’s scored 94% and is very popular on Facebook, Twitter, Google Plus.

Canadians had a vote over the following menu: 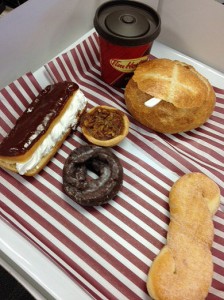 “With over 200,000 votes counted as part of our Bring It Back campaign, and thousands of comments, on social media, we couldn’t be more excited to be giving back to our loyal guests, by reintroducing for a limited time the Éclair in restaurants later this year,”Tim Horton’s President Marc Caira

Lessons to be learned:

By actively engaging with customers on social media we can develop products  while engaging customers.

Tim Horton’s has used crowd sourcing  and social media to engage customer which is a good way to use social media and to get customers involved.

By involving customers in social media we can create new ideas to develop products.

Tim Horton’s uses social media to bring back previous products from past decades and allows customers to vote which product they like.

Tim Horton’s has been involving Canadians to become  active in voting daily for their top contender.

If you have any questions about this article contact  Jeanette Melich,email Jeanettecatherine74@gmail.com

If you have questions about the accuracy of this article contact Peter Carr, University of Waterloo.