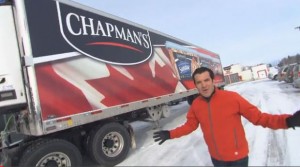 The best ideas may come from where you least expect them. Accenture Inc., released a position paper titled “The Next Digital Wave: Using Social Media Optimization to Harness Innovation“, in which companies can benefit from a great pool of ideas that meet needs of the end consumer. The paper suggests the innovation process should allow companies to leverage employee, consumer and third-party networks and the insights held within each. Accenture calls it “enterprise social innovation.” Companies can engage stakeholders as active participants in the innovation process—expanding the range of possible ideas.

Given I own an ice cream shop, I am most interested in case studies where a business similar to mine uses social media to apply concepts of collaboration in product development. I have chosen the case study of Chapman’s Ice Cream. Chapman’s Ice Cream is a business in my community – located in Markdale, Ontario – about 40 minutes from Sauble Beach. In 2009, Chapman’s business burned to the ground and went out of business. In July 2014, the Sauble Trading Post had a major fire and was put out of business for the season. Both companies swept up the ashes and set out on a course of rebuilding.

Please see the video of Chapman’s telling the story of the 2009 fire.

The final and most interesting similarity is that Chapman’s is the supplier for all ice cream product sold at the Sauble Trading Post! In preparing this blog, I researched the innovation process that Chapman’s chose to announce their return as a major Canadian supplier of ice cream products. Chapman’s partnered with Rick Mercer to develop a new product innovation called, “Blueberry Pie Ice Cream”. The famous Rick Mercer Report filmed on site at the Chapman’s production facility in January 2014 to feature ice cream production and pitch the new flavour of ice cream. The ice cream served to raise money for Mercer’s chosen charity “Spread the Net“, but it also promoted the revitalization of a 40 year old family run business. The promotion of the new flavour crosses many social media platforms. Rick Mercer uses Facebook, YouTube, Twitter, and http://www.cbc.ca/mercerreport and the Chapman’s Facebook page has hundreds of likes and shares

This is a video of Rick Mercer at Chapmans. Chapman’s and Rick Mercer teamed up to promote the rebuild of a business and hung the story line on a new product development.

Another case study is Ben and Jerry’s – Why Ben & Jerry is the Most Social Ice Cream Brand. Ben & Jerry’s is known for their innovative ice cream flavours. They use Facebook to announce new flavours. Their formula is simple: announce the new flavour and include a tantalizing product shot. The “yummy” photos average 23,000 engagements per post.
Ben & Jerry’s also uses social channels to facilitate consumer participation online. On their Facebook Page they run a weekly photo contest where fans submit photos of their Ben and Jerry’s ice cream. Each week, Ben & Jerry’s selects a favorite and it gets promoted as the “Fan Foto” of the week. This simple weekly engagement activity motivates fans to interact with their page and increases fan engagement. They also average over 300 engagements per post. Campaigns like this foster an interactive Facebook community, rather than having a group of passive fans.

Lessons Learned:
Ben & Jerry’s is using an integrated offline/online campaign. By experimenting with campaigns and programs like Ben & Jerry’s, the Sauble Trading Post will be able to learn what drives engagement with our customers. I contacted the Consumer Relations department at Chapman’s to find out how they approached the Rick Mercer show and developed his Blueberry Pie flavour.  I am hoping that Chapman’s Ice Cream will consider working with the Sauble Trading Post to develop a new flavour of ice cream.

Shannon Reid, Consumer Relations replied, “I have forwarded your request to Ashley Chapman (VP) to answer your questions about working with the Sauble Trading Post to create a “signature flavour” to celebrate your grand re-opening in 2015″.

I am thinking about flavours like, “Firework Display” infused with Pop Rocks, “Charred Chocolate” with Malteser chocolate balls or something that combines my two ultimate flavours: red licorice and chocolate! I am going to use my Facebook Page to crowd source ideas from my customers, friends and fans on their ideas for a new ice cream flavour. If all goes well, we may develop a new product, brand it, and sell it at the Sauble Trading Post. Then I am thinking really big about inviting Rick Mercer to be a “Celebrity Scooper” for the grand opening celebration on July 11th, 2015.

Rick is always looking for new places to visit, and what better film location than the shores of Lake Huron in Sauble Beach?  Do you know Rick?  Please contact me if you can help bring the Rick Mercer Report to Sauble Beach on July 11th, 2015.

Interview with Rick Mercer speaking about Spread the Net.

Why Ben & Jerry is the Most Social Ice Cream Brand, Case study

To Contact the author of this entry please email at: mizenk@rogers.com