In an increasingly digital world, consumers are no longer taking a passive approach when it comes to spending their money. Consumers are turning to online sources to research a product or service before spending their hard-earned cash. The travel/tourism industry is not immune to this trend – studies have shown that travellers are relying more and more on social media to decide where they are going to travel or to enhance their experience once they’ve made the decision.

The Nova Scotia Tourism Agency was established to facilitate greater collaboration between industry and government in developing a more innovative and globally competitive approach to tourism. NSTA has embraced the social media trend in travel/tourism, with a huge inventory of content on its social media sites.

In today’s global marketplace, travelers have endless possibilities when it comes to spending their vacation in places other than home. For a destination to truly be successful in attracting visitors, it must set itself apart from the myriad choices. Experiential marketing, where consumers are immersed within a destination by engaging as many human senses as possible, is seen a successful way for destinations to distinguish themselves. By forming a memorable and emotional connection between a potential traveller and a destination early in the planning process, there’s a much better chance the traveller will make the trip.

Experiential marketing has long been a staple in the promotion of Nova Scotia as a destination. From the use of Rita McNeil’s She’s Called Nova Scotia to Joel Plaskett’s Nowhere With You, Nova Scotia Tourism initiatives have used emotion to create a desire to visit the province.

The Places in Between – Nova Scotia Tourism (Source: Youtube)

The increasing presence of social media in our everyday lives has created even more opportunities to reach and influence potential travellers. NSTA realizes the importance that social media can have in increasing the number of visitors to the province.

Social media has changed our way of communicating with consumers. It provides us with an opportunity to keep Nova Scotia ‘top of mind’ easier, quicker, and more frequently.”(Source: Pam Wamback, Media Relations, Nova Scotia Tourism Agency)

In its 2013-2017 Corporate Plan Summary, the Canadian Tourism Commission emphasizes the role social media has come to plan in influencing a person’s decision on where to travel/visit:

A recent and significant research insight regarding the movement along the path to purchase is that the path does not simply end with the purchase of a trip. Rather, a traveller sharing his or her experience with friends, family and online communities during and after their visit is an important driver in moving other prospective travellers down their purchase paths. This kind of traveller-to-traveller advocacy is extremely valuable as it helps to reinforce that…a traveller is making the right decision. This research also highlights the fact that travellers are very insecure about their choice of destination. It is easy to lose them to a competing destination at any point along the path to purchase, including right until the point of sale. (Source: Helping tourism businesses prosper; p.20)

A 2013 study of 3000 Facebook users in Europe reinforces this point. Key conclusions are:

• 47% have scrolled through Facebook albums to find out more about a destination
• 58% said the experiences of friends and family have encouraged them to visit a place they hadn’t previously considered
• 95% used Facebook during the booking process
• 91% used Facebook during their vacation
• 99% posted something about their vacation after they returned
(Source: Travel Weekly – Facebook survey shows influence of travel posts; Nov. 20, 2013)

The Nova Scotia Tourism Agency has successfully leveraged social media tools to position Nova Scotia as a destination of choice.

The Nova Scotia Tourism website contains useful information and videos on getting around the province, featured roads trips based on particular themes (eg. lighthouses) or areas (eg. Eastern Shore), places to eat and stay, and festivals and events taking place. The website is interactive, with the opportunity to receive assistance in real time, and provides easy links to its various social media sites. 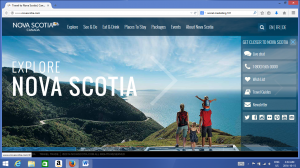 The Nova Scotia twitter page has 17,700 followers, and allows NSTA to tweet information and stories about upcoming events.

On Instagram, Nova Scotia Tourism has shared hundreds of images from around the province.

Nova Scotia’s flickr group has over 12.000 photos uploaded by over 600 members. Stunning photos taken by members from around the province are shared through this website.

The Nova Scotia Pinterest page allows followers and travelers to view video, images and information on a number of attractions and activities around the province. Information is organized either by area or theme. Bloggers are also featured on the site.

On Youtube, NSTA has a number of videos (in English and French) and reports featuring the province’s scenery and cultural diversity.

When I began working for Nova Scotia Tourism a little over 18 years ago, as the manager of my hometown Visitor Information Centre, visitors to the province were not as well-informed as they are today. Back then, visitors would stop by the VIC with a general knowledge of the province and a few of the major attractions they wished to see, but were not as aware of the wide array of things to see and do in Nova Scotia. Social media has changed all that: travellers’ resourcefulness has matured from those days, and so has Nova Scotia’s efforts to attract them to its shores, and to keep them coming back.

To contact the author of this entry please email: kevinrsurette@gmail.com

If you have any concerns as to the accuracy of anything posted on this site, please send your concerns to Peter Carr, Programme Director, Social Media for Business Performance