Donuts were invented in the 19th century and are still being made today the same way they were made back then using  simple ingredients like flour, sugar, salt and yeast. New ingredients and flavours were added over time to make donuts even more delicious with fruit and custard fillings, frosting, sprinkles of every colour, not to mention, chocolate, vanilla and caramel glazes galore!!

So with a product that has been around for more than 100 years with minor changes to main ingredients and shape – how does a company change things up and take donuts to the next level in the 21st century? Well… Tim Hortons found a way!!

The iconic Canadian powerhouse introduced the Duelling Donuts contest in 2013 to get Canadians to come up with the next new Tim Hortons donut.  The campaign was a huge success and they decided to do it again in 2014 but with a new twist… eight finalists would defend their creations in front of  a Canadian celebrity panel. This year’s Duelling Donuts contest dropped on July 7th. The winner received$10,000 in cash and their donut would be featured in Tim Hortons restaurants. 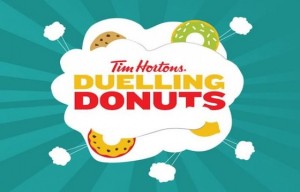 Tim Hortons took to social media to entice recipes and voters across the country. Fans could share their donut favourites and join the conversation on Facebook, or through Twitter and Instragram, @TimHortons by tagging their photos and comments with#TimsDuellingDonuts.

They created a Duelling Donuts website to display contest submissions and photos and to keep track of votes. The company also used celebrity endorsements from 90210 alum, Jason Priestly to engage Canadians and to drive excitement around the contest. 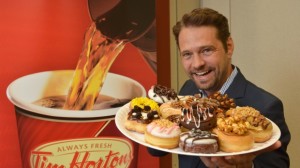 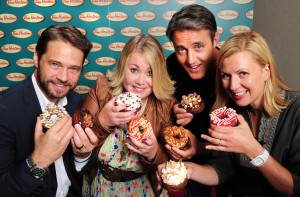 Journalists from across the country were joining the Duelling Donuts conversation too – interviewing local finalists in various print media along with television and radio broadcasts.

The contest was huge success – a total of 76,500 donut creations were submitted, but ultimately there had to be one winner… Jennifer Brown of Glencoe, Ontario took home the prize with her scrumptious Love of Reese’s® to Pieces donut.

This is not the first time that companies have reached out to customers through social media to develop new products. Tic Tac Canada did in 2013 with their new “Vote for Canada’s Next Flavour” contest and Kellogg’s ran a contest on Facebook for the next new and delicious ‘Eggo’ recipe.

There are many more great examples out there. It just goes to show how more and more companies are using social media to reinvigorate existing products and to collect new product ideas from none other than their faithful consumer base.

To contact the author of this entry please email at: rosanna.dalessandro@gmail.com