I’m not a real fan of pop as far as beverages go, but for as long as I can remember I’ve always enjoyed Coca-Cola (especially an ice-cold one).

Turns out, I’m not the only one who enjoys the iconic thirst quencher and its customer engagement levels as far as social media is concerned is off the charts.

As one of the most recognizable and established brands in the world, Coca-Cola’s use of social media channels is considered to be one of the best.

On Twitter, Coca-Cola has 2.7 million followers worldwide. In fact, according to Wendy Clark, Senior Vice President of Integrated Marketing Communications and Capabilities at Coca-Cola, every Tweet is answered.

The tactic is also used as a customer-service tool. While its social media team responds to compliments and mentions it also addresses complaints. In fact, Coca-Cola has shifted staff, putting more employees on the Twitter response team and fewer on the phone.

The Company’s use of social media is lauded by the experts themselves, as Marissa Mayer, President and CEO of Yahoo, has used Coca-Cola as an example of one of the best “storytelling brands” on Tumblr as images representing “Where Happiness Lives Online” fills the page.

But Coca-Cola’s biggest fanbase is on Facebook with 82 million fans. The Company’s Facebook page was actually started by two fans (and we can assume customers), Dusty Sorg and Michael Jedrzejewski, an actor and writer from Los Angeles, who started the Coca-Cola fan page on Facebook. Once the page surpassed 1 million fans, Facebook informed Coca-Cola that the page violated its rules and needed to be run by the Company, not fans. In place of taking the page down, Coca-Cola decided it would embrace the community. The two founders now work for Coca-Cola on a freelance basis. On average, the Company’s Facebook fans increase by one million every 10 to 15 days. 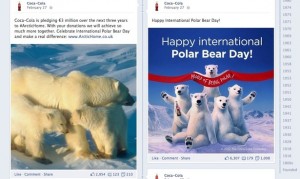 The strong emotional bond customers have with Coca-Cola is also evident on the Company’s Pinterest account. A number of the images appear to be taken from others’ Flickr accounts and last year the Company used Pinterest to run a competition – connecting the brand with the world of fashion.

Through its social media strategies, Coca-Cola will forever be linked to its customers. It’s established a brand that is based on bringing people together and keeps true to one of the company’s first marketing slogans “I’d Like to Buy the World a Coke.”  Take a listen:

To contact the author of this entry please email at: traceypearcedawson@yahoo.ca