The globally loved sports drink was developed by researchers at the University of Florida in 1965 as a solution to their football team, the Gator’s, suffering performance due to heat exhaustion (photo cred: taken from Gatorade Canada’s Facebook page)

Gatorade; the “original sports drink”, was the solution to a problem presented to a group of Florida researchers at the University of Florida in 1965 who were asked to learn the reasons the University’s football team (the Gators) were unable to maintain performance during games played in higher temperatures. The findings concluded that through significant sweating taking place during rigorous activity (especially taking place in high heat), if not replenished; a combination of water, carbohydrates and electrolytes cause the lessened physical ability, lethargy and in some cases could be damaging to overall health. The solution was the development of an electrolyte infused beverage they lovingly called Gatorade.

The success of the drink- the first of it’s kind- lead to mass production, marketing and sales. Fast forward a few acquisitions later (bought in 2001 by PepsiCo), rebranding, sports hero endorsement deals (like the infamous “Be like Mike” campaign seen in the video above) and the brand born out of innovation took a step onto the path less traveled in 2010 with the launch of it’s “Mission Control”, an area dedicated to 24/7 surveillance of the company’s online initiatives, specifically, their social media.

According to Senior Marketing Director at PepsiCo, Carla Hassan stated in an article featured on Mashable in 2010 by Adam Ostrow, that the company’s Vision concerning social media will extend beyond social networking and aims to, 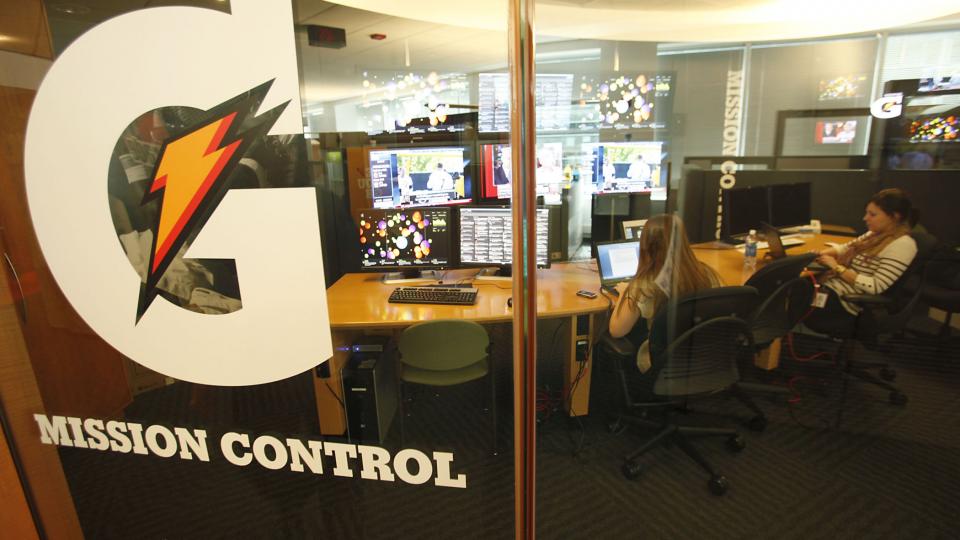 The “war room”, as it’s been dubbed, sits central to all other areas of the marketing department in the company’s Chicago headquarters. Perhaps symbolically indicating it’s significance to all other marketing efforts, the investment had it’s share of doubters as seen in this 2010 article featured on the Wall Street Journal website and written by Valerie Bauerlein Jackson. Bauerlein called the room a “glitzy hub” and seemed to taunt the decision stating it was,

…”an unusually extensive effort by a company to track social media…”

This continued into the comments, where several readers professed their doubts surrounding the groundbreaking decision,

“Maybe Gatorade is wasting too many resources trying to cully favor among fickle social media consumers at the expense of “the bigger picture”?

“Not sure social media is the answer.”

As has since been seen, the initiative has proven not only effective, but a game changer for the Gatorade brand itself. In 2008 it was thought that Gatorade was on it’s last legs. With the hire of  Robb O’Hagan and a strategic partnership with VML- the global digital marketing agency; the brand began to zero in on a key element of it’s online marketing efforts.

The promo “What’s G” commercial that was used to launch the G Series products. The commercial is indicative of the brand’s thinking at the time and it’s attempt to increase appeal among the younger, non-athletic demographic

Brand monitoring, the first step in almost every example of the industries efforts to standardize analytical data, has proven crucial to the success of Gatorade’s efforts. It was this honing in on consumer thinking that prevented the sports drink giant from making a huge mistake in it’s rebranding thought process. Originally aiming to break away from the athletic consumer and gain mass appeal with the greater piece of the beverage consuming market; listening to their most loyal fans caused them to take a step back and reevaluate. It made clear the need for the brand to perfect it’s already beloved image as a leader in sports nutrition and has since been the catalyst of several product developments in that market.

The brand has surpassed anybody’s expectations and regained market control and then some. Taking it’s own hashtag #WinFromWithin, the brand has been cited numerous times for it’s innovative thinking in it’s digital media efforts and long since quieted earlier doubters. Mission Control highlights the importance of understanding what your consumer views your image to be rather than pushing an image upon them. It clearly demonstrates how metrics and analytical data can be used to indicate the impact social media marketing is having on preformace and it also reaffirms the industry’s efforts to standardize the method in which it should be done.

Submitted By: Megan Clark of the Social Chemists

The current promo for Gatorade goes back to it’s roots, appealing to the athletic sports drink consumer