From May to November of 2009, 100 people were carefully chosen by Ford, because of their influential status throughout their social media platforms, were given the 2011 Ford Fiesta. For 6 months these “agents” were told to post on blogs, videos on YouTube, photos on Instagram and Flikr to digitally capture their experience with the vehicle. 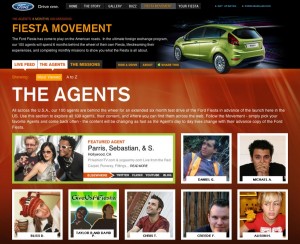 These 100 agents were asked to complete a “mission” month that would engage their target market on social media. Ford Motors wanted to promote their new car to a younger audience, and by adapting to their lifestyle of social media, the conversation organically spread throughout the world.

Here is a video that was posted on YouTube by one of the agents of his first mission called “Mountain Mayhem:”

The metrics for the social media campaign showed great success:

•  11 million Social Networking impressions
• 5 million engagements on social networks (people sharing and receiving)
• 11,000 videos posted
• 15,000 tweets…not including retweets.
• 13,000 photos
• 50,000 hand raisers who have seen the product in person, and have said they want to learn more about the product
• 97% of those people don’t currently drive a Ford
• 38% of awareness by Gen Y about the product, without spending a dollar on additional advertising.

Ford had created a relationship with their target market, in a way that was not intrusive since they found that consumers would rather take a recommendation from a friend, rather than straight from the corporation. Because of the positive response generated online, Ford continues with the #FiestaMovement every year. 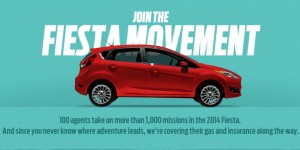 By interacting with consumers on a personal level, and finding influencers throughout social media, Ford has now created a platform that they can continue to expand and a fan base and target a broad audience that is very vocal with their online presence.