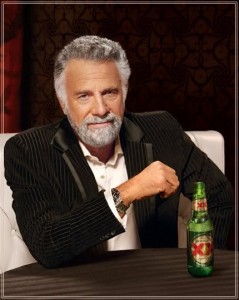 As I progress in my studies and near the completion of this course, I allot myself more and more freedom on the subjects I write about. At the same time, I am still attempting to maintain relevance to the weekly topic. I really wanted to write about this company and their marketing campaign even though it did not stem from the use of social media. Despite the beginning of this campaign starting in 2006, (an age where social media was a mere whisper, or a fad among the teens if you will) social media today has helped grow its immense popularity and success.

(How Jonathan Goldsmith became ‘The Most Interesting Man in the World’)

When you think about it, Dos Equis has probably found itself in never-ending thankful debt to the marketing firm Euro RSCG. This firm came up with the marketing campaign ‘The Most Interesting Man in the World.’ It started off as hilarious commercials offering examples of this man’s fascinating and superior life. The role is played by Jonathan Goldsmith, and the voice-over is by Will Lyman. The commercials explore this man’s potentially impossible feats. Whether its from freeing an angry bear from a bear trap to an intense game of pool, where he shoots a cue ball from a man’s mouth to sink in one of the six holes. Essentially, the commercials depict every male’s fantasy. Each commercial concludes with him saying, “I don’t always drink beer, but when I do, I prefer Dos Equis.”

In an interview with Mutineer Magazine, Goldsmith told his story of how he became the most interesting man and also discussed some of his personal interests. The last question presented him was…

“At this stage in your career, how do you view the art you are creating with Dos Equis?” And his answer… “I would say that this campaign has simplicity, elegance, and captures the moment. That’s what I think art is, on any level, no matter what it is. It just captures the essence of something, a moment in time.”

Euro RSCG’s rationale for the marketing strategy was explained as they quoted:

“He is a man rich in stories and experiences, much the way the audience hopes to be in the future. Rather than an embodiment of the brand, The Most Interesting Man is a voluntary brand spokesperson: he and Dos Equis share a point of view on life that it should be lived interestingly.”

From the release of these ads, U.S. sales of the beer increased each year between 2006 and 2010, not to mention the tripling of sales in 2008 in Canada. According to Wikipedia, sales of the brands are said to have increased 22% in these years while the sales of imported beer fell 4% in the U.S.

Rising from the success of these commercials, ‘The Most Interesting Man in the World’ has become a social media phenomenon. Carrying on the hilarious or perhaps ridiculous tones of this man’s capabilities, active social media users have created countless memes of the character and post them on various social media outlets. Most of them are deemed inappropriate, however below are just a few examples… 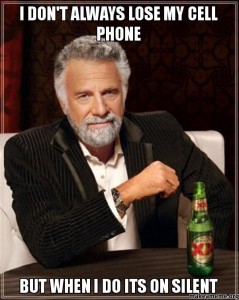 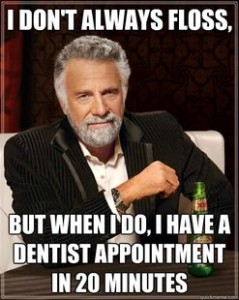 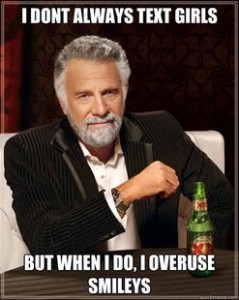 Now that these slew of commercials have taken the advertising in television world by storm, these hilarious play-on-phrases have now made a significant appearance on Dos Equis’ Twitter page. Most of the tweets are topical, relating to holidays or big current events. Though, as I scroll down the twitter page, every tweet is made to sound as if ‘The Most Interesting Man’ had said it. They stay true to his personality and charm. The following tweets below, refer to recent events such as the 2014 FIFA World Cup, 4th of July and Wimbledon. 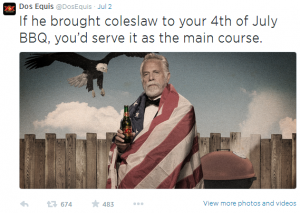 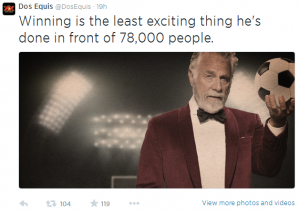 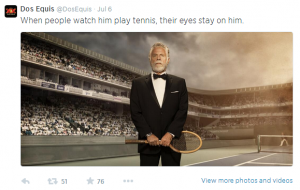 The introduction of this marketing campaign has given Dos Equis some great advantages – business exposure, increasing traffic to their website and social media portals and creating new business partnerships. This marketing strategy has allowed Dos Equis to give a name and a face to their company, and I can probably predict that this campaign won’t die out anytime soon. In a sense, they have introduced one of the first ever “brand personalities” to grace our computer screens. As we now are in the age of mass media, the face is now used for the company’s Twitter, Facebook and even Foursquare. Not to mention, the memes secure the brand’s ever-growing popularity. Besides all of this, did I mention the beer tastes really good? Stay thirsty my friends!