“Word Crimes” the second video of an expected eight to be released in as many days over a week long promotional push by the King of pop(culture) parody himself, Weird Al Yankovic made it’s debut yesterday and although #8days#8songs is not yet half over, one gets the feeling we’re witnessing the success of an icon cement his status as a legend in real time. 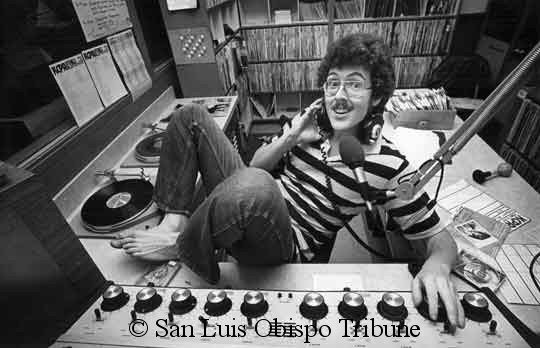 Seen above and below: “Weird Al” DJ at his College where he studied architecture
(photos courtesy of San Luis Obispo Tribune) 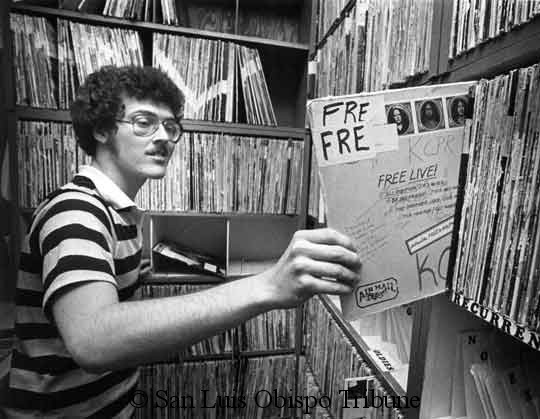 Marketing his brand as a pop culture satirical artist may seem an easy feat to some; but consider the nearly forty year career, massive shifts in social thinking and the ways in which we connect and communicate with one another. It leads you to the realization that this 56 year old former geeky-accordion-playing kid from California has managed to not only stay relevant but influence relevance itself- a feat that demands a sort of respect and admiration. 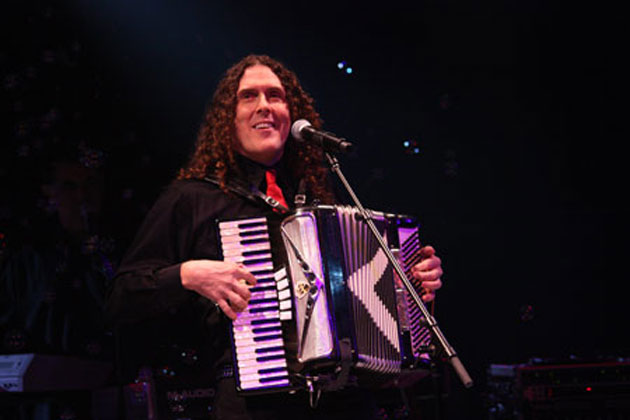 According to Al, his parents chose an accordion over the guitar because they were convinced that with it Al could change the face of Rock forever.

Seeming to have a hand in all forms of media; the following takes a closer look at the satirical comic’s more recent efforts online and how he has adapted his strategic planning over the last decade to include the ever changing landscape of the music industry. Check out the following infographic and consider the timing of the introduction of certain peer to peer sharing sites and the rise of social media giants like Twitter and Facebook in comparison with the release and resulting outcome of the various singles that have come from the last ten years. 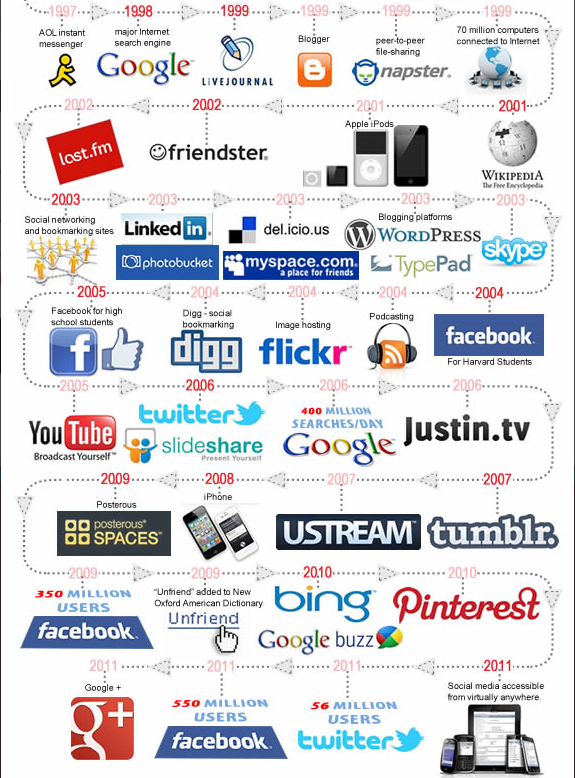 “Straight Of Lynwood” is released in September of that year as a dual disc (capable of playing the CD on one side and a DVD of videos on the other). Promotion of the album included a cross country tour and the launch of the official Weird Al Yankovic website (which issued E-cards that could be submitted in exchange for the ability to stream and download, “Don’t Download This Song” and an option to email the song to a friend as well (evidence Weird Al understood the importance of social sharing capabilities early on).

Although met with moderate esteem by the critics; the song, “White and Nerdy”, a spoof on that year’s Grammy winning “Riding Dirty” by Chamillionaire, would see Weird Al Yankovic once again on the Top 10 list of the Billboard Charts. It also gained the well-received artist a newly revived following, reaching the number one spot on Itunes in both the US and Australia, a definitive indication that online efforts were reaching the crowd they had intended on reaching.

Taking advantage of the increasingly popular use of digital downloads in place of compact discs, a series of singles were released between 2008 and 2009 and were finally packaged on the album, “Internet Leaks” which included the previously released singles in addition to retroactively including the single, “Whatever You Like”, a song discussing the troubled American economy and that country’s incessant need for spending based on the T.I. hit of the same name. The song was written and released in a matter of weeks and in fact was sold on Itunes in October 2010,  prior to the crisis coming to a head a month later. Al would be quoted as saying that the use of digital media was beneficial to him as,

“One of the hardest things I’ve had to deal with in my career is keeping my material topical even though I only release albums every three or four years,” Yankovic writes. “Now, with the advent and popularity of digital distribution, I don’t have to wait around while my songs get old and dated — I can get them out on the Internet almost immediately. It kind of boggles my mind — I thought of the idea for this new song a week ago, and next week it’s getting released!” 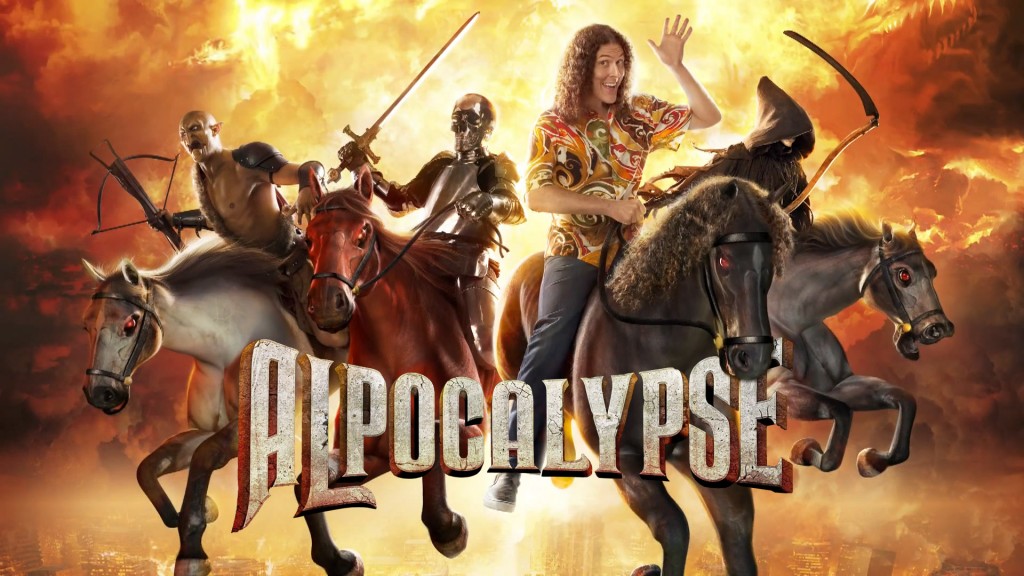 As if to prove the speed at which pop culture evolves; the 12th full length studio album, “Alpocalypse Now” was met with lukewarm praise and many who were now dictating the placement of chart topping songs had never heard of Weird Al Yankovic. To illustrate this point, you can visit an article reviewing the album on Billboard’s website and if you notice the social share buttons located at the left hand side of the post, a site that hosts thousands has but 2 shares via Facebook. What’s more, Billboard enlisted their followers to review the album themselves, which only highlights the albums lack lustre response.

In an effort to surpass the less than exciting outcome of his last project; it’s evident that Weird Al Yankovic has spared no cost to insure the world will continue to deem him as a relevant staple in mainstream entertainment.

Using promotional messages on Twitter and Facebook, Al began to build hype surrounding this week’s events online and if the last 24 hours and the response from the debut of the first two songs is any indication, this album promises to be the icon’s best yet.

An element contributing to the resulting success of Al’s off the wall lyrical creativity is bound to be described in part as the result of pressures that have been put on the star with the influx of satirical covers being uploaded to Youtube every day. As he describes in this audio interview with NPR Music

“…because of YouTube, I’m never the first person to do a parody of a certain song. And all the obvious ideas seem to be taken already, so nowadays when I do a parody I try to think of an angle that might be a little bit different or left-of-center that somebody else hasn’t thought of already. And I don’t think anybody, to this point, had done a “Blurred Lines” parody about proper use of grammar.”

There you have it, a peek into the last ten years in particular out of a decade spanning career that will continue to make waves with the third installment of the #8days#8songs campaign making its official debut in less than an hour on Weird Al Yankovic’s Youtube channel. Follow along with the success of the campaign by revisiting this post and checking out Weird Al’s social media stats as they evolve over the next week or so! (As seen on his Facebook page Wednesday July 16, 2014) 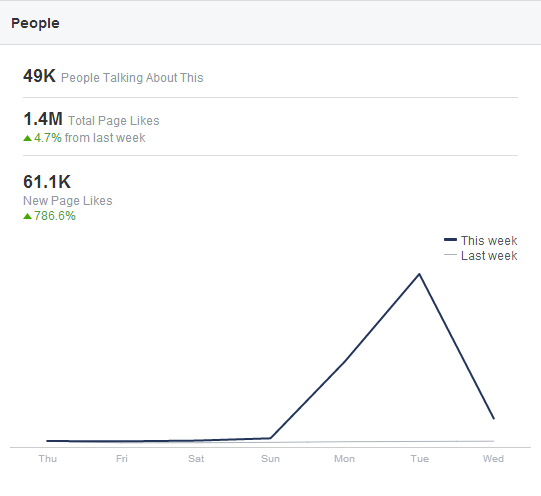