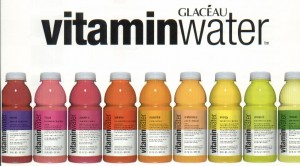 It makes me happy to write about this week’s company, as it is one of my all-time favourite beverages…VitaminWater! In my personal opinion, there is something about drinking a bottle of VitaminWater that gives me instant satisfaction upon the first sip. If you consider yourself a diet Coke or ginger ale addict (my former past time), I bet you can also relate to this feeling of instant gratification. Though, you might think there is something more with Vitamin Water, something refreshing? Energizing? Stimulating? Electrifying? Invigorating? All around just a “feel good” drink.

In the past years, VitaminWater stemmed from being just well-marketed flavoured water to an ever-growing success. This idea was first derived from founder, J. Darius Bikoff in 1996. As he felt as though he might be under the weather, he took some vitamin C and then drank some mineral water. He then thought of genius idea of combining these two elements. Viola…VitaminWater was born! In 2001, along with the launch of his other two products, Smartwater and Fruitwater, Energy Brands was taking over the New York area with Bikoff’s products being distributed in nearly four thousand different retail locations. In 2007, Coca-Cola purchased the company for 4.1 billion.

(Interview with Bikoff on selling the company)

“It’s a perfect match connecting the hottest active lifestyle brand with the full resources of the world’s best beverage company, to best understand today’s announcement, you really need to go out, buy a bottle of vitaminwater and try it for yourself to see how well it works.” – J. Darius Bikoff

The popularity of VitaminWater is obviously attributed to the masses, helping it reach new heights. Developing twenty-nine flavours throughout its history, VitaminWater wanted to create a flavour honouring the loyalty of their customers. This was done through their Facebook fan base. In the fall of 2009, VitaminWater created the “flavour creator” game. It was an application that could be found within their Facebook page. Soon enough, fans flocked to the app to test the waters (no pun intended) by whipping up a flavour of their liking. 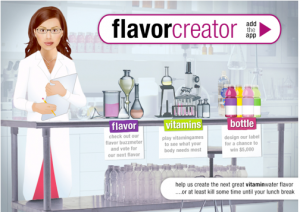 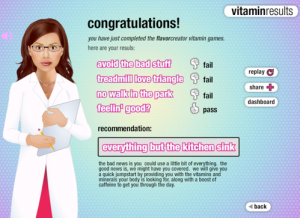 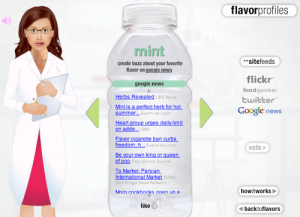 While the app includes all sorts of games and fun features, its main focus is to try to gather market research for their next flavour. To gather ideas of what flavours are most popular, the company sourced information from Flickr, Foodgawker, Twitter and Google News. Fans could design their own bottle label (including the Facebook logo), by designing a graphic, a flavour name, and a small blurb describing it. An award of $5000 was given to the person with the top label. In the beginning of 2010, a grand prize winner was announced, along with their new flavour “Connect.” A mixture of caffeine and 8 key nutrients, excreting a black cherry lime flavour. 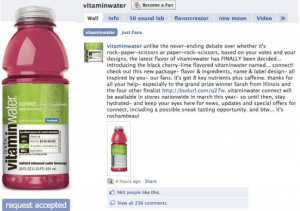 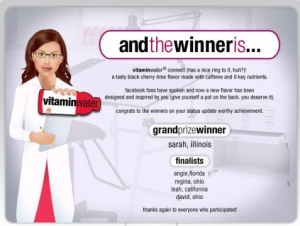 This idea was again used in 2012 for the London Olympic Games. Being the third official partner of these Olympic Games (along with Coca-Cola and Powerade), Vitaminwater allowed fans to create a limited edition “champion flavour,” to be only distributed in European countries.

This incredible form of crowdsourcing Vitaminwater is generating is attracting a sizable amount of traffic to the app. It allows information sharing with other Facebook friends, “likes”, commenting and posting on various walls, and creating more involvement and awareness from fans. It is also beneficial to them as it is able to gather an immense amount of research on consumers’ favourite flavours, bottle design, and use of vitamins. This also brings a higher value to the product, as these ideas are fresh and original. This strategy of research and development is the perfect example of social product innovation and the use of the Web 2.0. So much so, that the brand used this strategy again for the London Olympic Games.