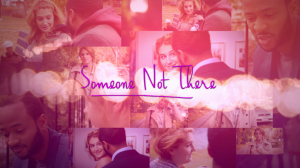 Liz, what social media tools did you use to help launch your series?

“We started a customer engagement strategy before we even started shooting.  It began with Facebook and Twitter, and coincided with the launch of an Indiegogo Campaign.  Once we star 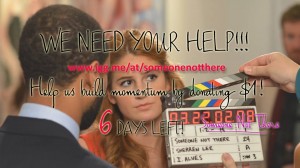 ted gathering production stills we also created an Instagram account to post behind the scenes pictures.  The week before launch we had an interactive strategy of posting a shoutout video, or plugging our trailer every day leading up to the launch.

What social media tools did you use to have develop your series?

“For media entrepreneurs in the new audience market, Indiegogo is one of the most important social media tools available to a) help raise funds for the series, and b) cultivate audiences.  Adam Leipzig – CEO of Entertainment Media Partners, and former president of National Geographic and senior VP of Walt Disney Studios – teaches emerging filmmakers the power of crowd-funding in his Crowdfunding Webinar and book Inside Track for Independent Filmmakers, emphasizing that the true power of crowd-funding is building your audience and engaging them from the get-go.  Our Indiegogo campaign kicked off with a bang thanks to a micro campaign we called “Why we Busk?”

We had teams of friends in the artistic and music community hit up key hot spots for foot Traffic in the downtown Toronto Core.  We were busking for initial funds to start out our campaign, and handing out flyers about the series + campaign, and speaking with people directly, getting them excited, and answering questions about how they could get involved.  Interestingly enough we hit up small independent press and local bloggers such as Fresh Print Magazine above to help spread the word of what we were doing and keep the buzz going online.”

What social media tools did you use to help engage viewers (customers)? 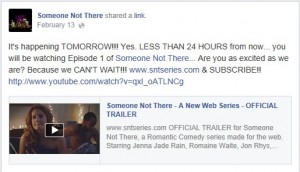 “Through Facebook and Twitter we’d post regular updates on the development process, including behind the scenes and on-set pictures, cast bios etc.  Every couple of weeks we’d provide updates to our Indiegogo supporters of how the project was progressing and what our next steps were.

We encouraged Indiegogo supporters to continue to be involved with the process sharing with their friends and getting us to the next stage of production or marketing.  Youtube was an important tool as well.  Before the series launched we posted Indiegogo video shootouts to our Super Fans and posted on Youtube then shared throughout Twitter and Facebook.  We also created a mini side series called Romaine & Jenna Banter.

This featured the two leading actors/actresses talking about what happened behind the scenes in each episode and sharing their own opinions about what was going on.  We posted a trailer about 2 weeks before launch, and a mid-season teaser of the last 3 episodes 2 weeks into our launch.

Finally, we housed our episodes on YouTube.  Our entire series is viewable.  The key thing with social media and engagement is staying on top of it.  We maximized our exposure by linking all video posts, pictures etc. to Twitter and Facebook.  All Instagram photos were reposted on our Facebook Fan Page as well.

In order to keep the buzz going, we sent out hundreds of press releases to media, bloggers, and web-series focused press.  Three of our episodes were nominated for Indie Series of the Week on We Love Soaps.  Once nominated we asked our fans and viewers to vote for our series to win!  We ranked 3rd and 4th of the week for all three weeks, with our actors ranking in the top 5 for best actor/actress/and couple each week nominated!”

Click to hear part of the TO Webfest, Seattle-based web series blog WebVee Guide interviewed us and posted an webcast of our interview. 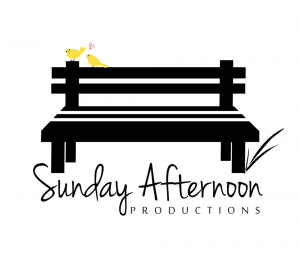 the series in partnership with Sunday Afternoon Productions.  Writer/Director of the series is Sherren Lee.

Lessons for Others: Elizabeth May left her 9-5 job to pursue her passion.  Liz and her colleagues had vision.  They engaged viewers by rolling out a well planned social media strategy.  Quite simply, when you know what your market wants, you are destined for success.  To ensure long term success (episode after episode), Liz and her team continued to listen, to excite and to engage their viewers on social media.

If you have concerns as to the accuracy of anything posted on this site please send your concerns to Peter Carr, Programme Director

Inside Track for Independent Filmmakers