Facebook is bad for us. According to Araceli Cruz, it makes us feel envious and sad. It distracts us and facilitates only shallow connections. “Facebook is changing the human race,” Cruz argues. “People think, speak and live in status updates…. It’s becoming increasingly difficult to truly connect with a person, rather than just their online character.”

MIT professor and psychologist Sherry Turkle refers to this as being alone together. “We live in a technological universe in which we are always communicating,” she explains, “and yet we have sacrificed conversation for mere connection.”

CNN columnist Douglas Rushkoff announced his Facebook exodus earlier this year. He expressed concern over the loss of agency he associates with the Facebook experience. “That innocent mention of a cup of coffee at Starbucks, in the Facebook universe, quickly becomes an attributed endorsement of their brand,” he argues.

Note it’s not the social connections Rushkoff’s running from – it’s the environment. Cruz agrees. She insists “I didn’t leave Facebook because I hate my Facebook contacts. But I would rather hug them in person than ‘Poke’ them. I prefer to laugh out loud than LOL.

Now you can have your friends and see them, too.

Essentially an event planning tool, Nextt allows you to connect with friends online to organize real-world get- 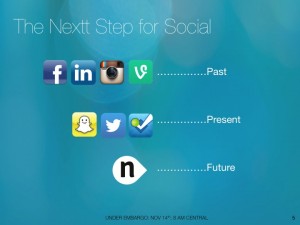 togethers. Founder Mark McGuire explains it this way. The first wave of social media been about capturing our history. Think Facebook and LinkedIn. The second wave focuses on the present – what are you up to right now? Think Tweet and Facebook status. And the third wave, according to McGuire, will be all about the future.

In the words of content strategist and technology writer Anthony Wing Kosner, “Nextt’s solution to the pressures of the insistent present is to help you plan for your preferred future.” Nextt allows you to integrate your online and real-world relationships to plan and enhance your future social interactions.

Meet me At the Pool.

At the Pool allows users to “shout” out to people nearby and organize anything from a walk in the park to an evening out. It works based on location, so you can connect with existing friends while also making new connections.

At the Pool CEO Alex Capecelatro explains that users were moving away from Facebook as a tool for social interaction. “Members wanted to use At The Pool instead of Facebook,” Capecelatro says, “and many told us they deleted their Facebook accounts long ago.”

According to Martin Bryan, At the Pool is “a kind of ‘anti-Facebook.’” Bryant argues that “At The Pool is tapping into a rejection of, or at least a reduction of interest in, Facebook amongst millennials” – it would seem they’re looking instead for social media platforms that integrate online and real-world social experiences.

Know who your real friends are.

Could this integration of online social networking and real-world relationships be the wave of the social media future?

“What’s the point of being connected with people we normally wouldn’t be connected with, like friends from elementary school, the dude at Trader Joe’s, fellow zombie enthusiasts?” asks Cruz. “These Facebook ‘friends’ aren’t even really friends. Neither does Facebook create more genuine friendships.”

The solution? Use social media as a tool to build connections through in-person social interaction, rather than as medium through which to manage purely online relationships. If Nextt and At the Pool are any indication, the future of social media may look very different from the Facebook newsfeed through which we’ve come to mediate our online social world.

More and more people are leaving Facebook because they find the social interaction lacking. What comes next? New social media platforms like Nextt and At the Pool integrate online social networking and real-world connections, bringing users back to the social side of social media.

Jeff Bercovici, Facebook Admits It’s Seen a Drop in Usage Among Teens
Martin Bryant, ‘Anti-Facebook’ At The Pool launches an iOS app to help you connect with new and old friends nearby
Araceli Cruz, Farewell Facebook, and Good Riddance
Anthony Wing Kosner, Nextt is the Social Network for the Near Future
Douglas Rushkoff, Why I’m quitting Facebook
Sherry Turkle, The Flight From Conversation

Submitted by: Vanessa Parks, University of Waterloo, SMBP student. To contact the author of this post, email vparks25@gmail.com.