Nike is no stranger to strong, innovative marketing campaigns – even those in the digital realm. Together with their marketing team, they’ve enabled consumers around the world to connect and encourage one another to achieve new personal bests.

There are several notable examples, include their many contributions to runners world wide with Nike+, a community that allows users to track their run routes, and encourage fellow runners to take on new challenging routes. The #findgreatness campaign during the 2012 Summer Olympics in London proved to be more successful in attracting attention than the official Olympic sponsor, Adidas. Finally, one of Nike’s biggest and most successful marketing campaigns, their partnership with Livestrong.org, formerly the Lance Armstrong Foundation.

During the 2010 Tour de France, Nike and Livestrong connected thousands of fans worldwide with their favorite cyclists, allowing them to digitally send messages of encouragement, and painting them on the race route. 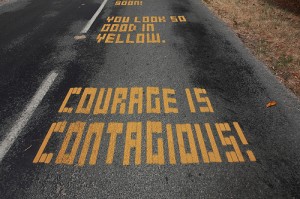 The Chalkbot, imagined and created by Deeplocal, is a hydraulic robot, run by a simple laptop computer, painting messages from around the world in road chalk through sprayers meant for line-painting. Messages are sent to Chalkbot via tweet, SMS and online message submission forums. On the back of Chalkbot is a camera that takes real-time pictures of the messages, posts them online along with the GPS coordinates of it’s location, and sends the original contributor an image of the message.

Chalkbot’s mission at the Tour de France was to send messages of hope, support and perseverance to the athletes in the race, and to inspire them to keep moving forward. Nike Livestrong, along with Deeplocal, aimed to make digital connectivity useful and meaningful, and the campaign was a resounding success. Thousands of contributions came in from all over the world, gaining tremendous media attention and the campaign generated $4,000,000 for the Livestrong foundation, an organization that provides support to people living with cancer. In addition, Chalkbot won several digital marketing awards, including being named one of the 10 Best Digital Campaigns by the One Club.

Sadly, the success of Livestrong hasn’t maintained it’s momentum. In 2012, after a doping scandal, Lance Armstrong was stripped of his Tour de France titles and stepped down as chair of the organization. Earlier this year, Nike announced that at the end of 2013, it would part ways with the organization, and no longer make Livestrong products.

Digital connectivity is such a powerful tool, and effectively connects people with others, with information and services globally. Digital campaigns are successful when the creators of the campaigns are innovative, and consider the power and potential of connectivity online.