#FML has been known around the world as a term used on social media sites for people to express their negative thoughts and experiences.  Once a derogatory term,in spring 2013: “FML”, was officially hijacked by Jell-O.  This past spring Jell-O seemed to have gone on a crusade to answer the Tweets that contained #FML in an effort to brighten those negative experiences and replace them with “Fun My Life”.  “Jell-O is trying to redefine the acronym as part of a new campaign that is “on a mission to fun things up, one #FML tweet at a time.” FML no longer stands for what we think it does. Instead, it stands for “fun my life”.” (The best social media campaigns of 2013 (so far))

Here’s how they did it: “We’ve all had an #FML moment. If you’ve been living under a rock, the popular hashtag stands for “F**k My Life,” and is often used when one is SUPER bummed out. JELL-O’s campaign takes the “f**k” to “fun,” and responds to #FML tweets with a photo and a link to a gift to make the user’s day better. From 27-week pregnant moms to sad students with flat tires, JELL-O has gifted alarm clocks, board games, whoopee cushions and more” (Community Managers Debate JELL-O’s #FML Twitter Campaign).  This does sound pretty genius.  However, after much thought and reviewing of tweets I hesitate to officially say that it was as great as it had initially set out to be.  In reading about this campaign I came across some really fantastic responses from Jello: 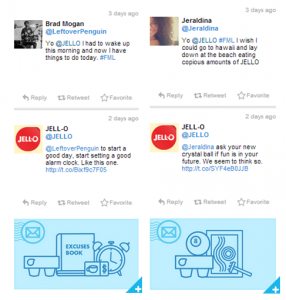 However, some of the #FML tweets were of a more serious nature, and that is where I think it was best for Jell-O to stay far, far away! 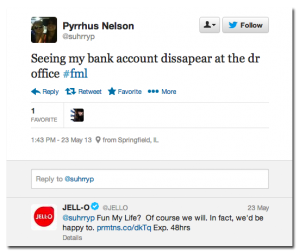 Jell-O may have invaded some of these #FML tweets and their response was unnecessary.  Where Jell-O failed in this campaign is through not being more cautious of who’s #FML tweets they were responding to.  In Janelle Vreeland’s blog she touches on this point and makes known the importance of being selective with the types of posts you choose to respond to, and where Jell-O may have been lacking some judgment. “One of the problems with the #FML project was the fact that the brand’s social media team was reaching out to people who weren’t necessarily asking for their help. In addition to people who were mentioning Jell-O directly in their tweets, the team was also reaching out to people who had just had really, really crappy days. The last thing they expected was to be tweeted at by Jell-O, and their attempts to “fun” their lives through free Jell-O weren’t exactly always in the best of taste. It’s tricky territory responding to users who haven’t reached out to you directly, so if you try something similar, do it tactfully and discerningly” (3 Lessons Learned from the Jello #FML Campaign).

I think the play on words was creative and when they responded to the right type of #FML post, it worked.  I mean who wouldn’t want free stuff to brighten their day? Especially if it was just a small #FML problem.  In her blog post, Lizzie Maldonado comments about the fact that this was in theory a good idea, “Who isn’t nostalgic for JELL-O? Who doesn’t want JELL-O telling them it’s all gonna be okay when we’re a little bummed out? Who wouldn’t want an #FML care package from JELL-O? Bill Cosby wouldn’t steer us wrong. JELL-O’s got it goin’ on” (JELL-O’s #FML Social Media Campaign Conflict). 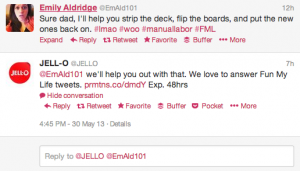 The bottom line is, this campaign would have done better with the right people responding to the right types of tweets.  It was a really creative play on words but we’ve seen other companies do it better.

The jury is still out on whether this was in fact a success or a fail, but I think it was a fun way to play on words in a Social Media campaign but ultimately, care and consideration need to be at the forefront to ensure your brand maintains a positive image.

The best social media campaigns of 2013 (so far)

Kmart: I Shipped My Pants-YouTube